All You Need to Know on Maximum Bets at Slots 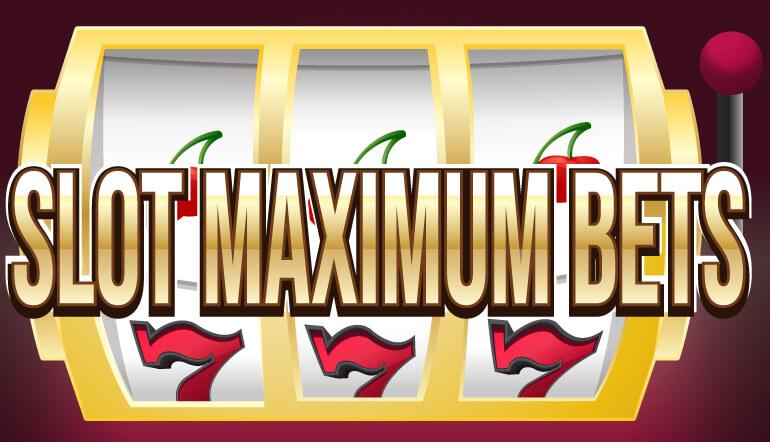 As long as slot machines have accepted wagers of more than one coin at a time, operators have tried to persuade players to make maximum bets.

In their day, the Trump Casinos in New Jersey and Indiana even had an anthropomorphic walking gold coin character called "Max Coins" urging players to bet the max for the highest paybacks.

Should players bet the max? Is betting the max the key to how to win on slots? Should you bet the max on any of online slots, video slots, three-reel slots? How do progressives figure into all this?

The answer differs from machine to machine and game type to game type.

TOP JACKPOT HAS A BIG JUMP WITH MAXIMUM BETS

Slot players were first urged to bet the max when multi-coin games became common in the 1960s and '70. Back then, and all the way until video slots made a real impact, nearly all slots had three reels, most had only one payline, and nearly all had a disproportionately large jump in the top jackpot if you bet the max.

One that's been a favorite of three-reel players for a long time is Double Diamond Deluxe. One common version pays 800 coins for a one-coin wager or 1,600 for a two-coin wager if you line up three Double Diamonds.

However, if you bet the maximum of three coins, the jackpot doesn't show a proportionate increase to 2,400 coins, it makes a bigger leap to 2.500 coins.

That doesn't mean betting the max is a profit-making opportunity, nor is it a key to winning on slots.

The house has an edge on every coin, and the house makes its biggest profit when you bet the max even though you're getting a higher percentage.

Other games with bigger jackpot jumps present a bigger gap between payback percentages for small and large bets, but on virtually every slot, the house still has an edge on the last coin and gets its biggest profit when you bet the most.

If there is a disproportionate jump in the top jackpot, betting the max brings a higher payback percentage but usually also can bring bigger losses because of bigger bets.

The most common configuration for online slots and video slots in live casinos is to have five virtual reels, though there are a few three-reel games and a few with six, seven or more reels.

Across those virtual reels are multiple paylines. The earliest popular video slots had five lines. Soon, lines were expanded to nine, 15, 20, 30 and more. Forty lines are common today, with 50 and 100 also in use.

Some games don't use traditional paylines. Instead, any left-to-right path that connects symbols on adjacent reels can form a winning combo. When there are five video reels, each three reels deep, there are 243 such paths, and the games are referred to as "243 ways to win" games.

Early in video slots' rise, game manufacturers tried the format that had worked so well with reel slots. They tried giving the top jackpot a disproportionate jump just like three-reel games.

Casinos found players weren't taking the bait. Many early 1990s video slots with five lines accepted wagers of up to five coins per line -- a 25 credit max. It was quickly established that a few players bet only one coin, most covered all the paylines but for less than the max, and that the average bet was between two and three coins per line.

Disproportionate jackpots were not doing the job of encouraging extra play. Slot makers adjusted their approach.

Today, very, very few video slots or online slots offer a disproportionate jackpot jump for a max bet, so there is no payback percentage advantage to betting the max.

Be sure to cover all paylines with your bets, but on most online and video slots there is no gain in payback percentage when betting the max.

There are several ways to design a progressive slot. All involve taking portions of each bet and adding it to the jackpot or jackpots. The value of the pot keeps rising until someone wins it, collects, and the pot is reset to a starting value.

Progressives began on three-reel slots as extra incentive to chase the top jackpot.

Now the jackpot adds much more to the machine's overall payback percentage, and you see a bigger gain when you bet the max.

Video and online slots usually involve multiple progressive tiers. We've seen two jackpot levels, 12 and any number in between. Usually, lower-tier jackpots are small, worth a few bets, and designed to keep you interested and fund a few extra plays. It's not until the upper tiers that you see jackpots of thousands of credits.

There are several variations of multi-tiered progressives:

SYMBOL-DRIVEN, MUST BET MAX TO BE ELIGIBLE FOR JACKPOTS

These are rare on video and online slots. If you see one, the payback percentage is highest when you bet the max, but the marketplace has mostly left such games behind.

Funding for the jackpot comes from lower paybacks on the basic game than on other similar slots. These, too, are rare, but if you see one, either make the max bet to be jackpot eligible or choose a different game. There is no point in settling for a lower payback percentage without being eligible for the good stuff.

One of the problems designers face is that video and online slot players make wildly different-sized bets. How do you make a player betting 1 cent per line on a 40-line game eligible for the same jackpots and a player betting 10 coins per line?

One way to accomplish that is to make bets on the progressives separate from bets on the base game. You might see an option to bet 15 cents or some other amount to be jackpot eligible. That way, everyone can bet what they want on the main game, but they're betting the same amount on the jackpots.

Again, progressive slots usually have lower returns on the base game than other slots, so if you're going to play one of these games, make the progressive bet. If you don't want to make the extra bet, choose a different game.

These are the most common video and online progressives.

Parameters are set, and a random number generator chooses a number between them. The parameters could involve time, number of spins, total money wagered or jackpot size.

Let's say the parameters are jackpot size, and the jackpot must be at least $100 but no more than $250. The RNG will choose an amount between those parameters. The player whose wager pushes the jackpot to the amount selected wins it.

There is an advantage to larger bets on such games in that a bigger bet gives you more chances to push the jackpot to the designated total.

If you're going to play a progressive, bet what it takes to be jackpot eligible. But with the exception of three-reel , single progressive games, that usually does not require betting the max.