The best casinos of Las Vegas 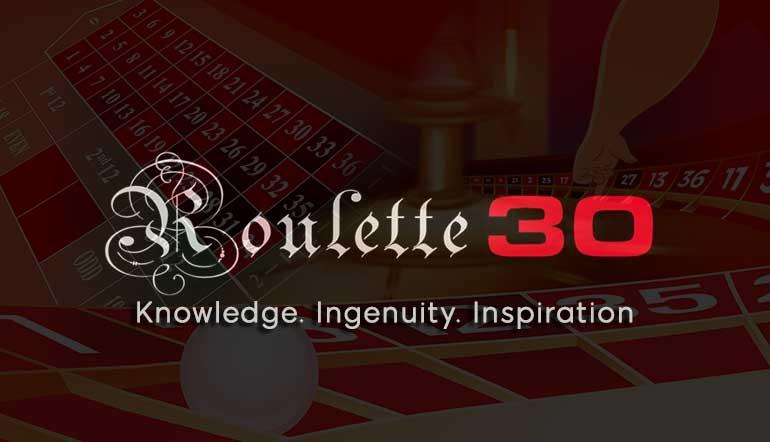 There are places in the world that offer excitement, natural attractions, pleasure and relaxation or simply getaways of the daily routine. Las Vegas is by far the most peculiar, amazing and non stop action city in the planet! Located in the state of Nevada, this city enjoys a hot desert – sub tropical weather. In some months of the year like June and July, temperatures of 117 degrees Fahrenheit have been registered. Las Vegas is known worldwide as a gamblers paradise. There are more than 120 casinos which are divided in two mayor sections: Las Vegas Strip and the Downtown Casinos. The casino that began the gaming madness back in 1931, was the Northern Club, today known as the La Bayou, .

Las Vegas casinos are a totally different story from their European counterparts. Most of them are designed based on themes such as major cities in the world, historical events or other specific activities and cultures. All casinos in Las Vegas share some characteristics like: all of them offer slot machines and the most popular casino games like Blackjack, American or European Roulette and Craps. Nevertheless, there are major differences in the additional services provided to the players and also the betting limits on each game. How does someone decide where to play? It is not easy in a city where all casinos claim to be the best and looking to attract the most players with groundbreaking and tenacious competition. Below, you will find the Casinos with the best entertainment and that have become the most respected gaming operations of Las Vegas, Nevada. 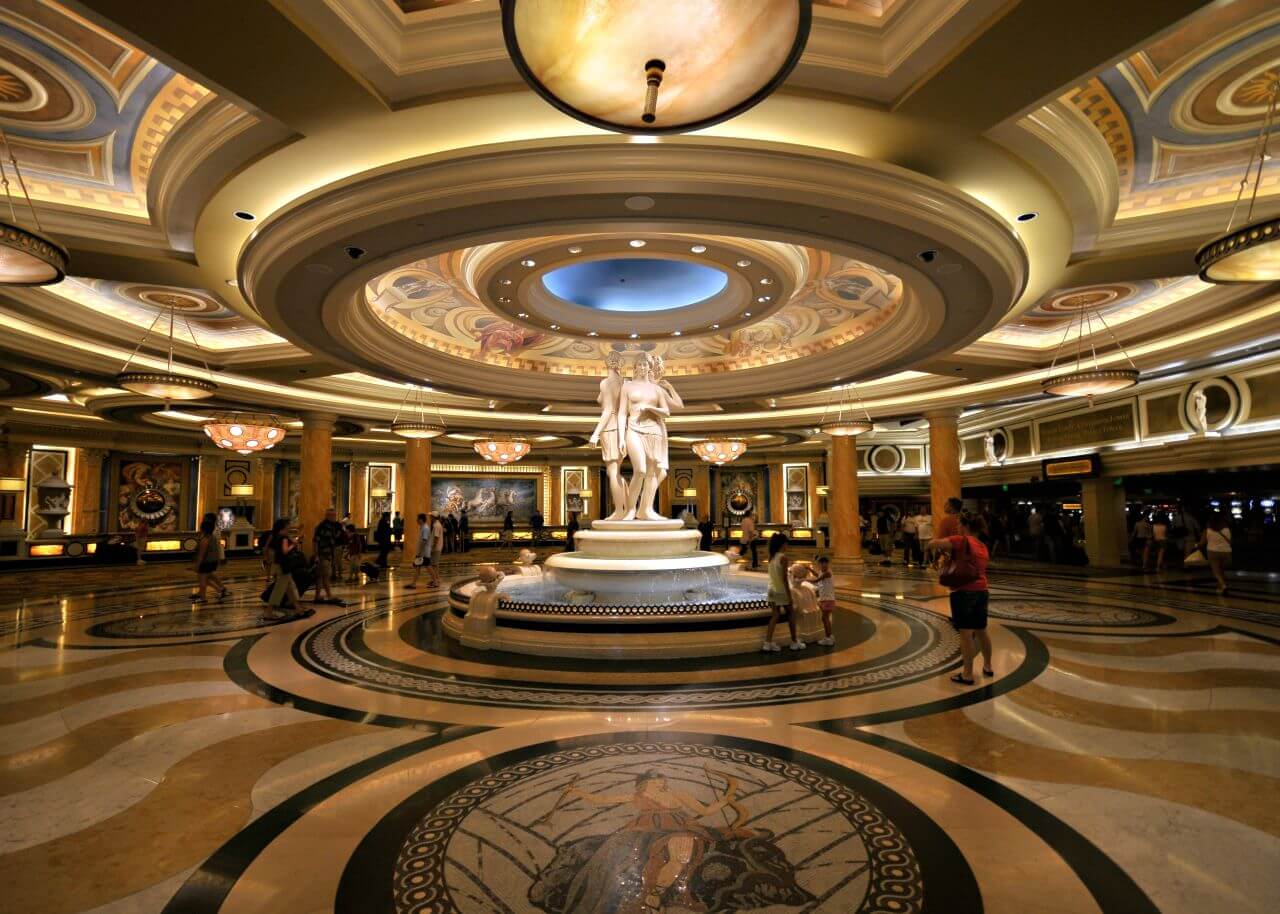 Our first option is Julius Caesar’s home! With an Ancient Roman setting, Caesar´s Palace has become part of Vegas Folklore and Culture. The Hotel and Casino has been featured in several movies and TV shows mainly for its attractive decoration and architecture.You feel like playing in a movie.
Behind the walls of Caesar’s Palace, lies one of the best and most respected casinos in the world operating since 1966.
Located between The Mirage and the Bellagio, Caesar´s Palace offers a wide selection of Slot and Video Poker Machine from $1 up $500 per spin-game. As for table games, all major games like Blackjack, Roulette and Craps are available and is one of the few casinos in Las Vegas that has Six Card Poker tables.
One major attraction for poker players is the 6000 square feet Tournament Room with 62 tables at Caesar’s where major tournaments take place every month. Caesar´s Palace is known for the famous and prestigious NBC Heads Up Championship, a Texas Hold’em tournament where the best players in the world face each other in heads up matches.

Next casino in our trip is the…. 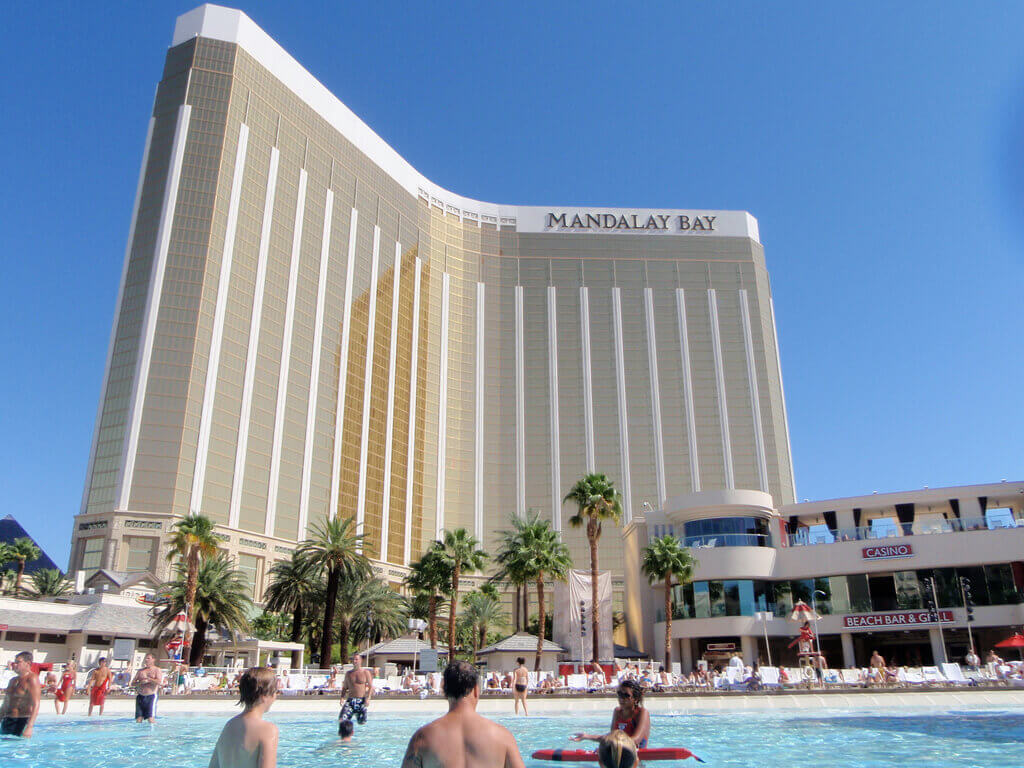 One of the most luxurious and respected Hotel and Casinos in Las Vegas is the colossal Mandalay Bay, operating since 1999 it was formerly known as Circus Circus.
This amazing piece of architecture connects to its sister properties, Excalibur and Luxor, through the Mandalay Bay Tram.
The Mandalay Bay was setting of the TV show Las Vegas starting James Caan.
The casino offers a top of the edge service with all major games available including Roulette, Craps, Blackjack plus other table games.
More than 1700 machines build their slots offering accepting bets from $0, 01 up to $100. Mandalay Bay is one of the casinos in Las Vegas that offer Slots Tournaments.
For players who want to learn poker, Mandalay Bay has free poker lessons Mondays and Thursdays at 2:00pm. The poker room also offers special discounts in rooms for poker players.
Those who enjoy betting on sporting events, Mandalay Bay has one of the best sportsbooks in town allowing high limit wagers on all major events and horse racing.
There is a High Limit section in the casino where players that can afford high bets on Blackjack and Baccarat can do so. Slot machines in this area take bets up to $500 a spin.

If not the most popular, The Luxor has to beeon the top 5 most visited Hotels and Casinos in Las Vegas. The main reason for this: The Hotel and Casino design is based on an Egyptian Pyramid featuring a replica of the Great Sphinx of Giza in the outside of the hotel. Everyone who arrives to Las Vegas by airplane, especially at night, notices the impressive and amazing structure the Luxor is.
The casino at the Luxor is composed of over 1300 slot machines and 62 table games.
More than $17,000,000 in jackpots are awarded per year at the Luxor, which is one of the favorite spots for locals and tourist to play their favorite games.
Every day at noon, free lessons of craps, blackjack and roulette are offered at the casino.
The poker room at the Luxor is quite decent and stakes for all types of players are available.
The Sportsbook and Racebook at the Luxor offer lines in all major events and a comfortable, luxurious area to enjoy all the games which include drinks and food for regular players. 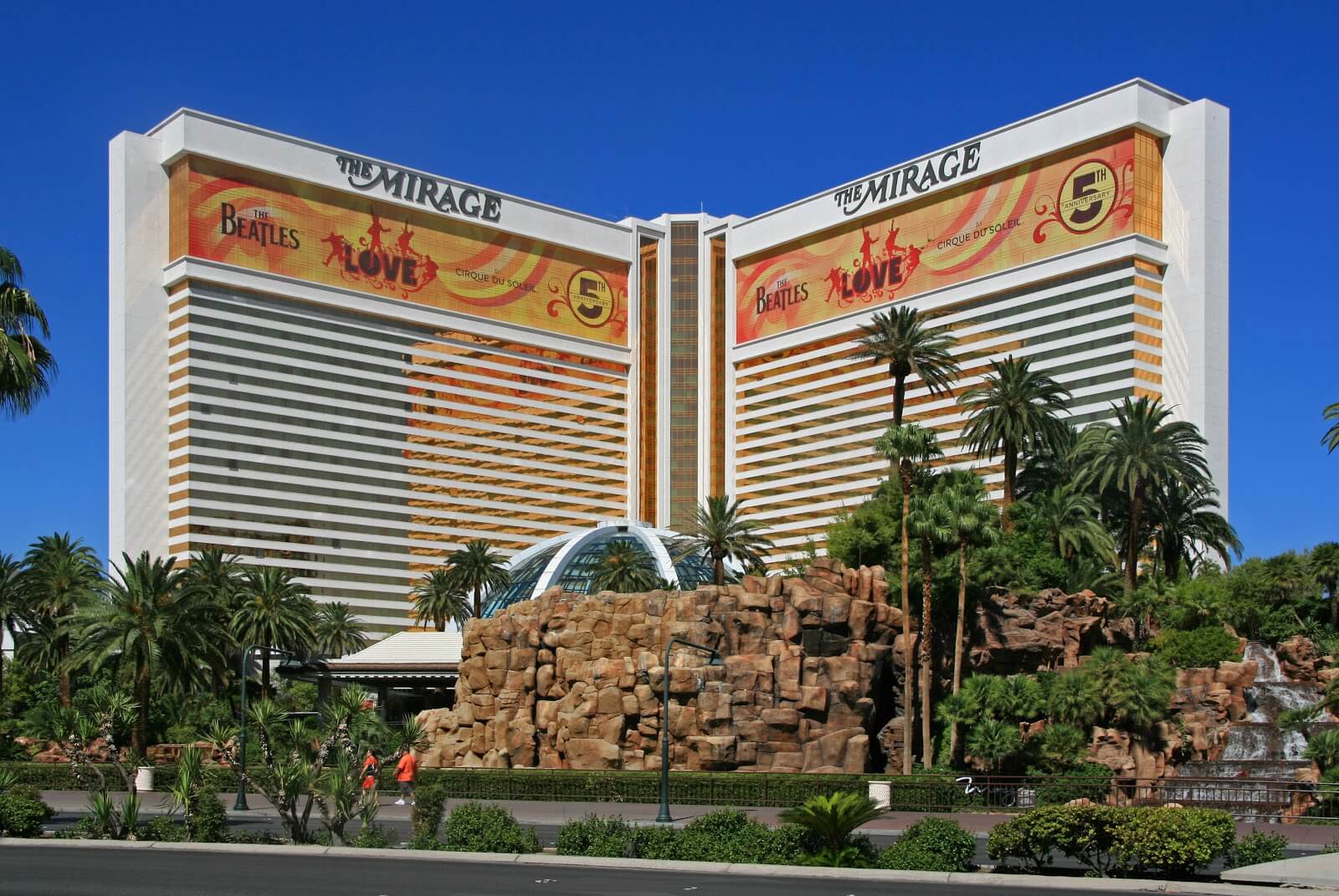 Another of the iconic and most recognized Hotels and Casinos in Las Vegas is The Mirage. The 10,000 square feet casino is known to be one of the most sophisticated in Nevada and worldwide.
Operating since 1989 this impressive and fancy casino offers gaming on all major and most popular casino games like Roulette, Craps and Blackjack.
Some of the slot machines at the Mirage accept $1000 wagers, which make it a hot spot for Slot Machines High Rollers.
The poker room at the Mirage is one of the best spots for poker in town. Recreational players will be able to find small stakes games and high rollers will always have the opportunity to face the most respected players in Las Vegas with games up to $25-$50 in No Limit Hold’em and higher if required. Sit n Go’s tournaments are available at the Mirage with buy-ins of $70, $115 and $175. Check with the poker staff for free poker lessons as well!
The High Limit Lounge at the Mirage is a luxurious section in the casino for players with deep pockets who enjoy enormous action and excitement.
The Mirage is home to one of the most respected and visited sportsbooks in Las Vegas. Open 24 hours a The Mirage Sportsbook takes bets on all major sporting events and horse races.
mirage.com 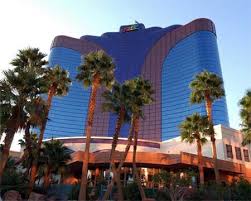 The Rio is a Brazilian themed Hotel and Casino in the heart of Las Vegas Strip and it has received worldwide exposure and recognition since it has been home of the annual World Series of Poker since 2005. The World Series of Poker is the most prestigious poker event, for over 30 days the best players gather and play the best and most expensive tournaments in the world to determine the best player in each discipline. This event used to be hosted at Binion’s but changed after the WSOP was purchased by Caesar´s Entertainment.
The Masquerade Themed Casino at Rio has over 1200 machines and more than 80 table games.
Rio’s poker room is obviously popular and there are more than 5 daily tournaments. One of the largest progressive poker jackpots can be found at the Rio poker tables.
For regular players, the Rio offers a $10,000 weekly freeroll. Sportsbook and Horse race betting can also be found at the Rio. 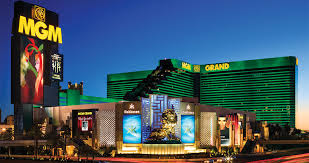 The second largest hotel in the world is the impressive and astonishing MGM Grand. It was inaugurated in 1993 and is home to the famous Cirque du Soleil show Ka.
The MGM Grand Casino is also one of the largest gaming floors with a 171,500 square feet area home of more than 2500 slot machines taking bets from $1 to $1000 and multi game machines. All major and most popular table games can be found at the Grand.
The state of the art race and sportsbook at the MGM Grand provides an amazing and exciting experience for the sports gambler and are known for accept high limit wagering.
The poker room hosts a popular daily $50 turbo tournament at 2:05 daily and also free poker lessons a t 10:30 am and 6:00pm.
mgmgrand.com 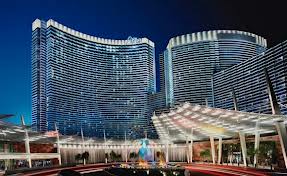 The Aria is part of the new generation of Hotels and Casinos in Las Vegas. They began operations in 2009 and in a few years have earned respect and recognition as one of the best gaming operations in the world.
Popular Mechanics considers the Aria as one of the most technologically and advanced hotels ever built
The slot machines at the Aria accept wagers from $1 to the impressive amount of $5000, which only a few casinos in the world offer.
The Aria’s Poker Room has become a popular location since top players like Phil Hellmuth, Tom Dwan, Phil Ivey and others frequent the high stakes tables.
A daily poker tournament of a $100 buy-in runs at 1pm and 7pm.
The high-class sportsbook at the Aria offers players touch screens at the seats to place wagers while watching the games and events in the best high definition screens in town. 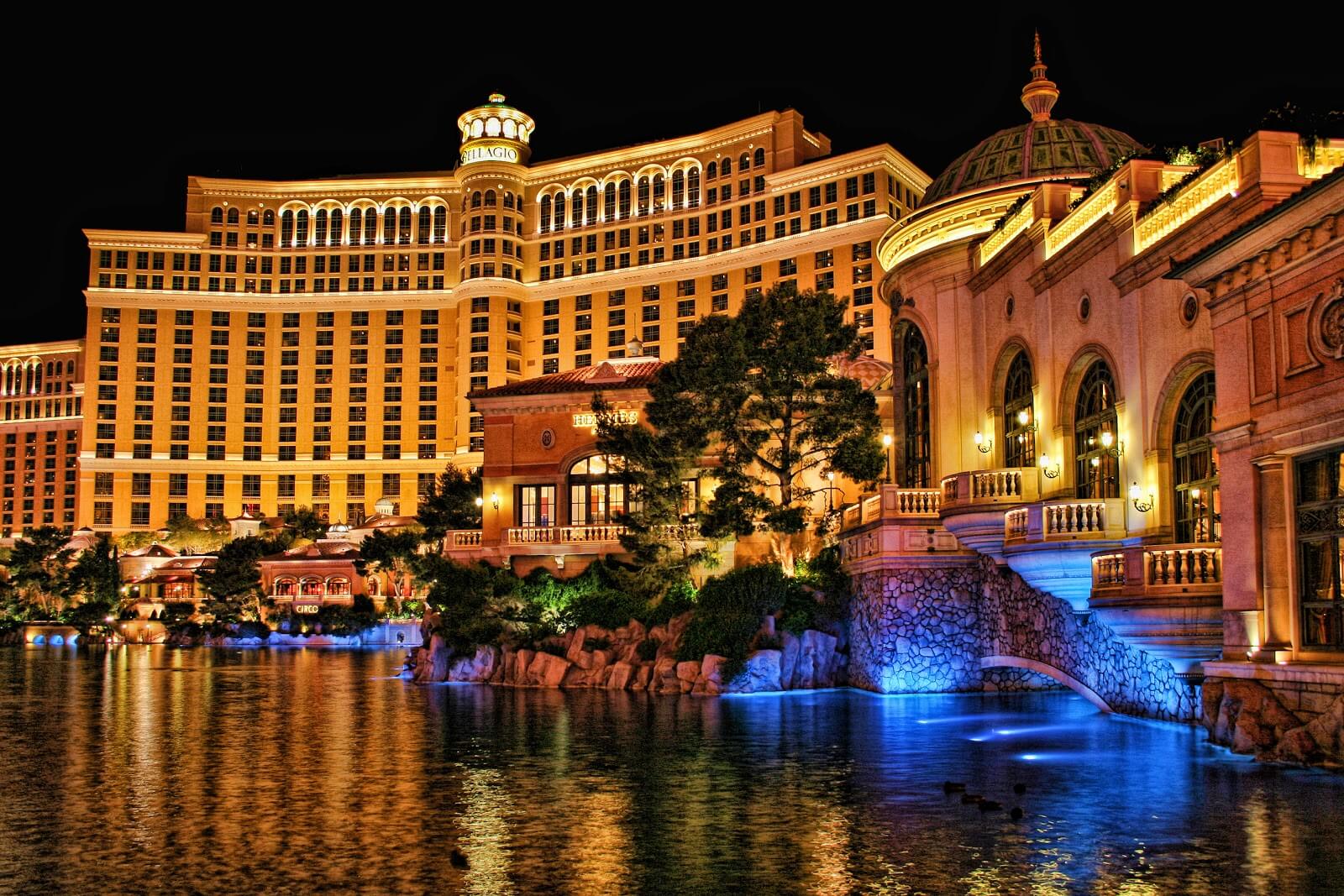 The most iconic and respected casino in Las Vegas is located at the Bellagio.
Hundreds of movies and TV shows have been filmed at this unique and luxurious hotel.
The Bellagio opened its doors in 1993 and quickly became known as the best hotel and most prestigious casino in town.
The gaming area offers approximately 2300 slot machines, the biggest selection in Las Vegas with Multi Mullion Jackpots to be won.
Club Prive is the high limit section of the casino offering games such as Blackjack and Baccarat with high limits and top of the edge service.
The poker room at the Bellagio named after Bobby Baldwin, who is famous Poker Player and Casino Manager, has worldwide recognition for hosting the biggest poker games. The minimum buy-in in Bobby’s Room is $20,000. Players of the caliber of Doyle Brunson, Daniel Negreanu and Johnny Chan are frequent at the tables.
The Bellagio became partners with WPT (World Poker Tour) and is host to their biggest and best events.

Las Vegas is a city full of action, excitement and full of surprizes. The city has become the Entertainment Capital of the World and every year hundreds of thousands of tourists try their luck at the tables and enjoy the slot machines for a chance to win one of those million dollar jackpots that only a town like Las Vegas can offer.

However, as astonishing these casinos are, they lack the flair and the history of my (and Dstoyevski’s) favorite casino of Baden Baden. But who cares. Let the game begin!