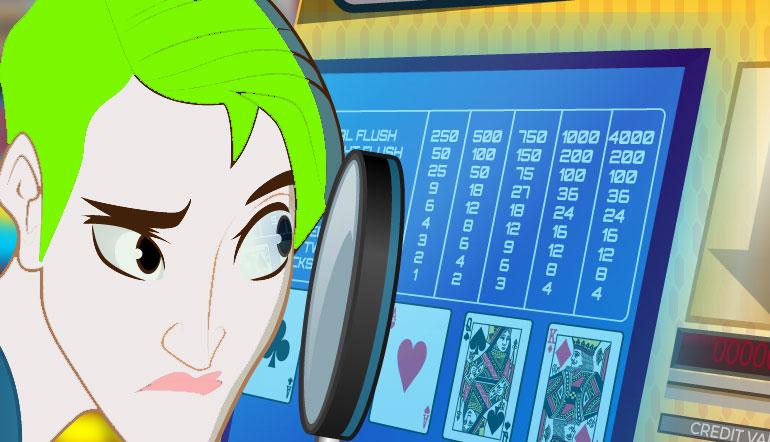 Joker’s Wild is a fun variation on video poker, one that has carved out its own niche of loyal players. Like all video poker games, Joker’s Wild comes in a variety of pay tables and payback percentages.

Unlike the rest, it comes with a basic divide: Some games start the pay table at two pairs, and others start it at a pair of Kings.

And beyond that, there’s an intriguing variation. One version of Joker’s Wild Kings or Better puts the top payback on five of a kind instead of a royal flush.

Four of a kind plus a Joker to make the set five pays 4,000 coins for a five-coin bet. With expert video poker strategy, five of a kind appears an average of once per 10,994 hands, meaning players hit the top jackpot nearly four times as often as they draw a natural royal flush in most video poker games.

Each Joker’s Wild game requires its own strategy to get the most out of the game. Let’s take a look at pay tables for three variations.

With expert play, this version returns an average of 99.29 percent. There are higher paying versions that return in excess of 100 percent – one raises the five of a kind return to 3,000 coins and another raises four of a kind to 100.

But the 100-percenters have mostly disappeared from offline and online casinos. Even this 99.29-percenter is not common, but it’s available in some casinos, while others reduce payoffs on anything but the bottom four hands.

With expert play, this one returns 99.08 percent, in the same ballpark as the Kings or Better version above. As with other games, there are higher and lower pay tables. Be pleasantly surprised if you find a higher one, but beware the low-payers.

You don’t get your money back on King or Ace pair and payoffs are lower on Joker royals and straight flushes. But you get a little extra on natural royals and there are higher returns on four of a kind, full houses, flushes and straights.

The overall effect is a more volatile game with a similar overall return to the Kings or Better version above.

With expert play, the five of a kind jackpot game returns 97.19 percent. A 99.12-percent version with enhanced full house and flush pays seems to be out of circulation.

Note that natural royals, joker royals and straight flushes all bring the same return. With the emphasis on five of a kind, the others essentially are all just straight flushes.

For a time, this was the most popular video poker game in Atlantic City, but its popularity and availability have waned.

One of the main attractions of video poker is the royal flush jackpot, with 4,000 coins being the most common offering. On a 25-cent machine, that’s $1,000.

On non-wild card games, royals come up an average of about once per 40,000-plus hands, depending on specific game and strategy. Cards are dealt randomly, so it’s your strategy that makes the difference in royal frequency.

In the Joker’s Wild Kings or Better game detailed above, royals pay 4,700 credits, or $1,175 on a 25-cent machine. With expert video poker strategy, the average yield is one royal per 38,477 hands.

That makes the five of a kind game a prime jackpot hunter’s game, even though those looking for the best overall payback will invest their money elsewhere.

Instead, the strategy differences among these games are driven by the bottom of the pay table, where King and Ace pairs don’t always bring payoffs Other pay table chances make differences, too.

The Kings are a paying hand in JWKB, but it’s better to hold the four diamonds in JW2 and JW5K.

**King of diamonds, King of spades, Queen of clubs, Jack of hearts, 10 of spades

In JWKB, you’ll hold a lone Ace in hopes of pairing it up for a paying hand. The average return is 2.29 on the Ace alone, and the next best options are Ace-10 or Ace-Queen at 1.65 each.

In JW2, the strongest play is to hold the flush at a flat 35-credit return instead of the 26.56 average on four parts of a Joker royal.

The Joker plus the Ace for a winning two-Ace hand in JWKB, so the best play is to hold Joker-Ace with an average return of 8.47 credits vs. the 6.90 on holding the Joker by itself.

On the other two, the best play is to hold Joker-9. There are no high pair plays, and Joker-9 maximizes chances for straights or straight flushes  Average returns on JW2 are 6.56 on Joker-9, with Joker-Ace well down the strategy table at 5.78. In JW5K, averages are 6.41 on Joker 9, with Joker-Ace farther back at 5.64.

The main lesson is that if you’re playing Kings or Better versions of Joker’s Wild, you need to be aware of potential high-pair paybacks. In Two Pair versions, there are no high pair paybacks, so high cards that would be automatic holds in other games often are just discards.