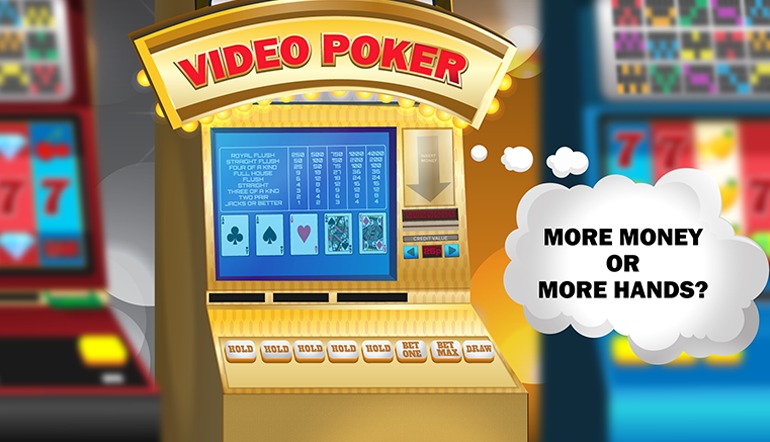 Some video poker players make think of this as a paradox and some might think of it as downright blasphemy, but here’s an important concept to get the most out of video poker games: Making the draw that will win most often is not always the best play

.Think about that for a second, and consider a hand with 5s of clubs and diamonds, a 7 of hearts, 9 of clubs and a King of spades.

That’s a key to video poker strategy. The best play is the one that will bring the highest average return.

Then there are 16,125 possible draws, with 11,559 losers. Of the winners, there are 2,592 two-pair hands, 1,854 three of a kinds, 165 full houses and 45 flushes. The presence of two 5s precludes high pairs without it turning into two pairs, and there are no straights, flushes, straight flushes or royals.

Now you win on only 28.3 percent of hands, but the average return soars to 4.1 coins.

By holding the pair instead of the high card, you win fewer hands, but you also win more money.

That’s an important piece of strategy to remember in a wide variety of video poker games. Low pairs are more valuable than unpaired high cards.

Evaluating a low pair vs. a high card is one of the most important hands in video poker because it’s a situation you’ll see frequently. But it’s not the only time the draw that will win less often is the better option.

Let’s look at a few with average returns per five coins wagered on 9-6 Jacks or Better and 9-6 Double Double Bonus Poker:

LOW PAIR VS. FOUR CARDS TO A FLUSH

But that 6-for-1 pay for a flush is a powerful incentive. Your average returns for holding the pair are 4.1 coins in Jacks or Better and 3.7 in Double Double Bonus, but average return on the four-card flush is flush return is 5.7 coins in either game.

HIGH CARD VS. FOUR CARDS TO A FLUSH

HIGH PAIR VS. FOUR CARDS TO A ROYAL FLUSH OR STRAIGHT FLUSH

This is a rare situation, but let’s take a look just for fun.

When do you discard a sure winner? When it gives you a chance at a huge jackpot.

If the Initial deal is a King of spades along with Ace-King-Queen-Jack of clubs, holding the two Kings will give you a winner every single time. The average return is 7.7 coins in Jacks or Better and 7.2 in Double Double Bonus.

If you discard the King of spades and hold just the four clubs, 24 of the 47 possible draws are losers. But one of the winners is a royal flush, and that sends the average return to 92.7 coins in either game. There’s no way you can pass that up.

The effect is smaller if you have four to a straight flush, such as Jack of spades with 8-9-10-Jack of clubs. Then the average return is a mere 17.9 coins for holding the four clubs, still more than double the average for holding the sure-thing high pair.

All that makes a difference in the overall payback percentage you’ll see at the games. The important thing is to make the plays that will bring the highest average return, and it’s especially important to remember that a low pair is a more valuable starting point than an unpaired high card.

Video Poker
About the Author
By
John Grochowski