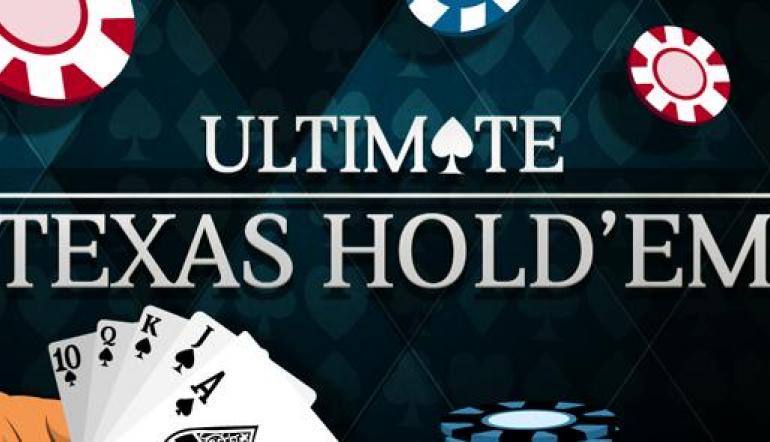 In poker rooms at live casinos and at online poker sites, Texas Hold’Em is by far the most popular game.

Away from the poker rooms, players can enjoy the excitement and intrigue of Hold’Em in online casinos and in the table games pits of live casinos. Ultimate Texas Hold’Em translates that Hold’Em experience to table games play against the dealer.

Here are 10 things every beginner should know before playing Ultimate Texas Hold’Em.

1. YOU ARE PLAYING AGAINST THE DEALER, NOT AGAINST OTHER PLAYERS

You do not have to try to evaluate other players’ hands, nor is there any bluffing in Ultimate Texas Hold’Em.

To win, your hand must beat the dealer’s. Other players’ hands don’t matter to you.

2. THERE IS NO RAKE, AS IN REGULAR TEXAS HOLD’EM

In poker room games including Texas Hold’Em, seven-card stud, Omaha and others, the house makes money by taking a percentage of each winning hand.

That’s not the case in Ultimate Texas Hold’Em. The house makes money because a mathematical edge is designed into the game.

That means per $100 in antes, your losses will average $2.20. That’s on the low end for table games, so Ultimate Texas Hold’Em gives you a realistic shot to win.

Those who don’t learn basic strategy and are too aggressive in their betting face larger house edges.

4. YOU RECEIVE A TOTAL OF SEVEN CARDS, WITH THE BEST FIVE MAKING UP YOUR HAND

Players and the dealer each start with two cards face down. Your two cards are used only in your own hand.
All other cards are community cards that may be used in all hands. They are turned up in two sets, one with three cards, and then another with two cards.

5. ALL PLAYERS MUST MAKE ANTE AND BLIND BETS

6. THERE ARE THREE FURTHER OPPORTUNITIES TO BET, IN DECREASING AMOUNTS

There’s a final opportunity after the last two community cards have been turned up. If you haven’t already made a play bet, you may make a bet equal to your ante.

So you can bet the most and potentially win the most if you have strong cards early.

7. YOU DO NOT HAVE TO MAKE A FINAL BET OR FOLD DECISION UNTIL YOU’VE SEEN ALL YOUR CARDS

In poker room games, if other players bet and you don’t at least call them, you fold.

That’s not the case in Ultimate Texas Hold’Em. If you bet after your first two cards or after the first three community cards, you still stay in action until the final betting opportunity.

But after all community cards have been turned up, you must either bet and hope you have a stronger hand than the dealer, or fold and lose your ante.

8. THE DEALER MUST HAVE AN OPENING HAND FOR YOUR ANTE TO WIN

The cutoff point for the dealer to open is a pair. Your play bet is in action regardless of whether the dealer opens, but your ante is a push if the dealer can’t open.

Now let’s look at examples if the dealer doesn’t open.

Let’s say you have made a $5 ante and a $5 play bet. Your hand is King high, with no pairs or better. The dealer had is Queen high, so it doesn’t open.

You win your $5 play bet and your $5 ante pushes and is returned.

Now let’s say you’re King high and the dealer is Ace high. The dealer still doesn’t open, but beats you. You lose your $5 play bet, but your $5 ante is returned to you.

Blind bets are paid according to a pay table, regardless of whether the dealer opens.
Here are the winning hands and payoffs.

10. AN OPTIONAL TRIPS BET PAYS ACCORDING TO A PAY TABLE

Trips is a side bet, and you are not required to make it. It is a bet that your hand will include three of a kind or better.

There are several different pay tables available. All start at 3-1 on any three of a kind and max out at 50-1 on a royal flush. There also are payoffs on straight flushes, four of a kind, full houses and straights, but those may vary.

With all payoffs being at least 3-1, Trips is designed to reward uncommon hands. You’ll get a winning hand about once per 6.5 hands, and the big 50-1 payoff about once per 30,940 hands.

Ultimate Texas Hold'Em Tips
About the Author
By
John Grochowski