Up until "7 Up Baccarat" (7UB), there has not been a variant of baccarat that is substantially vulnerable to card counting. While baccarat side bets can be a lucrative opportunity, the best an AP can do card counting standard baccarat is an earning rate of about 87 cents-per-shoe with a $1000 maximum bet (see this post). What makes 7UB baccarat different is the unique rule that the Player starting hand always has a seven as its first card. It follows that A’s and 2’s are premium cards for the player side, as they give the Player a natural. Likewise, 8’s and 9’s are premium cards for the Banker hand.

The complete rules for 7UB can be found in this document: Baccarat_7_Up. The main rule changes from standard baccarat are easy enough to describe:

The main difference between standard baccarat and 7UB comes in the payouts. Winning wagers made on the Player bet are paid as follows:

Winning wagers on the Banker bet are paid as follows:

Here is the complete combinatorial analysis for the eight-deck game: 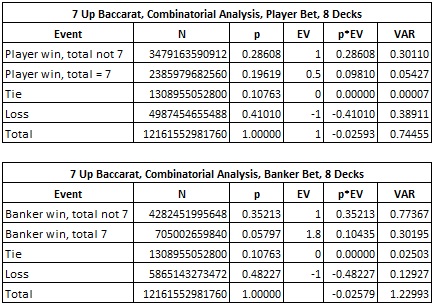 These off-the-top edges are significantly higher than the edges for ordinary baccarat. If not for the novelty of the game, it is difficult to find a reason that 7UB would interest a seasoned player.

The next step in considering advantage play is to compute the effect of removal (EOR) for each card for both the Player and Banker wagers. Based on these EORs, card counting systems can then be developed and tested.  As it turns out, the Banker wager is significantly more countable than the Player wager, so I will present the Banker wager in full first. 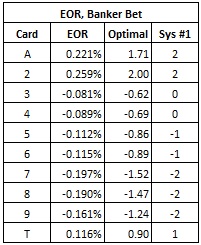 For convenience, here are the card counting tags for these two systems:

The betting efficiency of System #1 is 0.967, which means it should perform very well compared to the optimal system, as we will see. The next step is to run a simulation of each. I first consider the optimal system.

The following table gives the results of a simulation of one hundred million (100,000,000) eight-deck shoes of 7UB, using the optimal system to count the Banker bet. It is assumed that the AP will only place a Banker wager when the count exceeds the trigger count, and that the AP makes no other wagers. I assume the usual cut-card placement at 14 cards, together with the usual rule for burning initial cards. 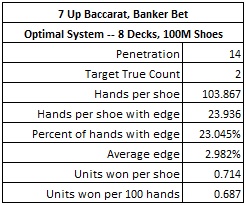 Next I consider system #1. The following table gives the results of a simulation of one hundred million (100,000,000) eight-deck shoes of 7UB using system #1 to count the Banker bet: 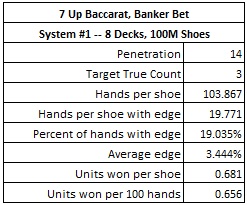 What makes this opportunity significant is that there are usually very high limits on the wagers for baccarat. Unlike blackjack, where a card counting AP may struggle to stay under the radar with wagers of $500 or more, in baccarat there is little or no game protection for ordinary card counting. Thus, an AP may be able to wager $10,000 or more per hand with little scrutiny. It follows that card counting 7UB is an extreme vulnerability in terms of its potential dollar-value for the AP. It is therefore extremely urgent to find a reasonable safeguard.

Reducing the penetration through the shuffle does not entirely succeed. The following table gives the win rates for various cut-card depths. Each line is based on a simulation of twenty million (20,000,000) eight-deck shoes: 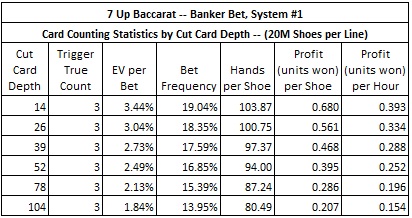 The win-rate does not go down very quickly with increased cut card depth. Reducing the win-rate from card counting by 50% requires a cut card placement of more than one deck.  But even with a 50% earning reduction, the card counter still has a strong opportunity given the size of wagers he can place. A minimum of two decks would need to be cut off to mitigate the card counting risk.

Moving on to the Player side, the following table gives the EORs for the Player bet. Alongside the EORs, I give an optimal system which uses decimal values for the card counting system. This is followed by a practical system that can be used by an ordinary card counter. 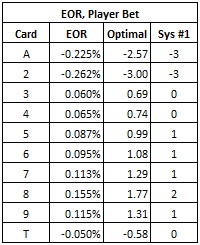 For convenience, here are the card counting tags for these two systems:

The betting efficiency of System #1 here is 0.962, which again is very strong.

The following table gives the results of a simulation of one hundred million (100,000,000) eight-deck shoes of 7UB, using the optimal system to count the Player bet. It is assumed that the AP will only place a player wager when the count exceeds the trigger count, and make no other wagers. 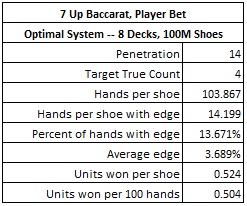 The AP can earn 0.524 units per shoe against the player bet using the optimal system. 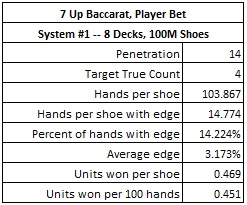 System #1 allows the AP to win 0.469 units per shoe. He has the edge on 14.224% of his hands, with an average edge of 3.173%. An AP who is betting $100 whenever the count is +3 or higher, and makes no other wagers, will earn about $46.90 per shoe. System #1 returns just over 89% of the value that can be obtained using the optimal system. It follows that playing against the Player bet is both less efficient and less profitable than playing against the Banker bet. For this reason, it is unlikely that a solo counter would target the Player side.

However, there is a unique team opportunity here. If two (or more) APs are playing as a team, then one AP can count the Player bet and the other can count the Banker bet. They can signal each other for when to make their respective wagers. It follows that this team can earn 0.681 + 0.469 = 1.150 units per shoe per team member. If this team is well-funded (and many are), and each team member wagers $10,000 whenever there is an edge, then each team member will earn $11,500 per shoe. Two card counters can earn $23,000 per shoe.  If the cut card is placed at one deck, this team can still earn over $12,000 per shoe. It follows that 7UB is untenable if dealt from a shoe with a cut card that is not deeply placed.

I am aware of one location that 7UB is currently offered where it is dealt from a continuous shuffler. This is highly unusual for baccarat and may indicate that this casino was already hit by card counters.

There is an additional side bet that can be offered with 7UB called “Super 7’s.” The unique rule of 7UB is that the Player hand always starts with the Player having a 7. The Super 7’s side bet is paid based on the additional number of 7s that are dealt in the hand.

Here is the pay table for the Super 7’s side bet:

If you read this post on the “Lucky Nines” baccarat side bet, you will understand that the Super 7’s side bet is crushable.  A team of three counters (with the third counter keeping track of the Super 7's side bet), will absolutely destroy this congregation of opportunities.

The following are my recommendations for safeguarding 7UB: