Playing Blackjack Around the World 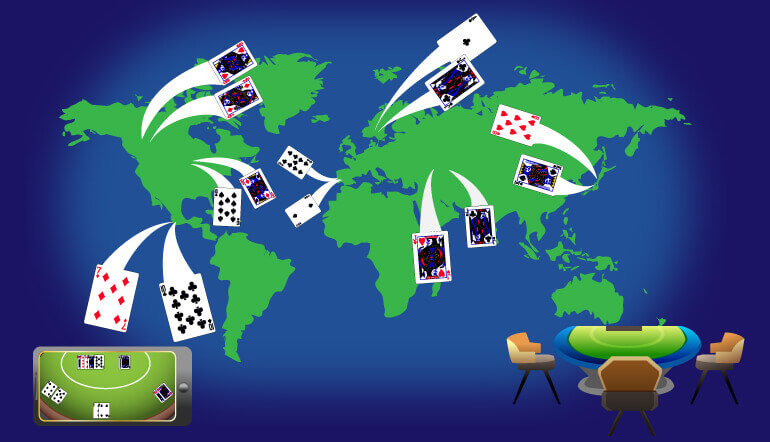 Blackjack is blackjack: your goal is to beat the dealer whether you play in land-based or online casinos in the U.S., Europe, Asia, Caribbean, or any other part of the world. However, playing live blackjack abroad in a land-based casino has some differences compared to playing in the U.S.  The following table summarizes the differences.

(Note: Peruse the table to compare the differences in rules before reading about the no-hole-card rule, which follows.)

With the no-hole-card rule, the dealer does not take her second card until after all the players have completed their hand. Some players mistakenly believe this gives the casino an extra advantage because the dealer is less likely to bust when the cards are dealt consecutively, rather than when the dealer’s second, and possibly additional draw cards, are dealt after the players have drawn their cards.

Mathematically, it makes no difference in the long run whether the dealer takes her second card before players act on their hand, or she waits and takes the second card after the players act. The no hole card, per se, has no effect on the odds of blackjack, or on the basic playing strategy (so if you hold a 16, you play it the same way regardless if the dealer has a hole card or not).

What affects your odds and your playing strategy in no-hole-card games is when a player loses additional wagers made on splitting and doubling when the dealer’s second card gives her a blackjack. This occurs with ENHC and it increases the house edge by about 0.11 percent (rule dependent). It also requires a modification to the basic playing strategy.

The following table shows the strategy differences for a multi-deck ENHC game (dealer hits soft 17 and players can double down after pair splitting), compared to an American game with the same rules. Essentially, the strategy changes occur when the dealer shows a 10 or Ace and include:

The above modifications to the playing strategy, for ENHC, assume surrender is not offered. In a future article, I’ll explain the strategy changes when the latter is offered.