Playing Blackjack Around the World – Part 2 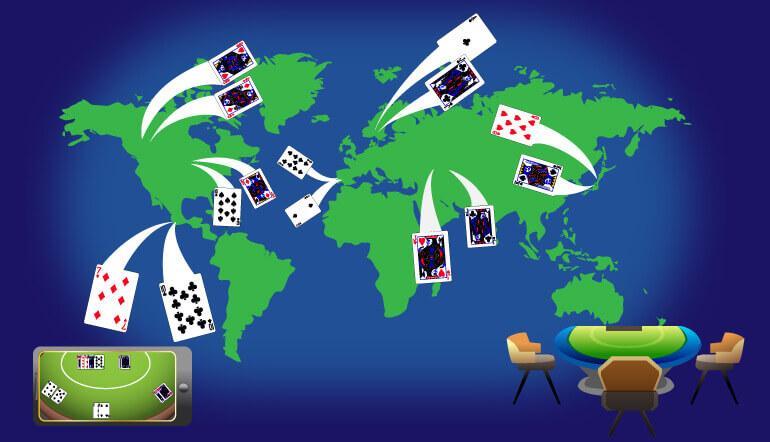 In Part 1, I summarized the differences in playing rules between playing blackjack in U.S. vs. abroad, specifically focusing on the no-hole-card rule. In this article, I will discuss the surrender rule.

For the uninitiated, surrender works like this: After comparing your initial two-card hand against the dealer’s upcard, if you think your chance of winning the hand is not good, you can forfeit playing your hand and surrender (or give up) half of the amount of your wager. In some casinos, you must verbally announce to the dealer that you want to surrender your hand by just saying, “surrender.” Other casinos have implemented a hand signal for surrender, which is to draw an imaginary line from left to right on the felt with your finger. Either way, if you decide to surrender your hand, the dealer will remove half of your bet then scoop up your initial two cards and place them in the discard tray. Essentially, when you surrender, you forfeit your hand and half of your bet before drawing any more cards.

The mathematics of surrender is pretty straightforward. You should surrender a hand when your chance of winning is less than one out of four hands (i.e., your expected loss is worse than 50%). This means that statistically, if playing the hand has less than a 25 percent chance of winning (and consequently greater than a 75 percent chance of losing), you will save money in the long run by surrendering the hand instead.

With late surrender, you can only surrender your hand after the dealer peeks at her hole card when she shows an Ace or a ten, to determine if she has blackjack. If she has blackjack, the surrender option is no longer available, and you will lose your entire bet (unless you also have a blackjack).

The basic playing strategy for late surrender in multiple-deck games where the dealer stands on soft 17 can be summarized in the following two blackjack rules:

Early surrender is rarely offered in U.S. casinos and is more prevalent in European and Asian casinos where dealers do not take a hole card until after all players have acted on their hands (European no-hole-card rule). With the early surrender option, a player can surrender his hand to a dealer’s Ace and/or ten-value upcard before she checks to determine if the casino dealer has a blackjack. Early surrender is a much more favorable rule for players than late surrender. (In a six-deck s17 game, early surrender against the Ace, gains you 0.39 percent, and against the 10, it’s 0.24 percent.)

Note that in some European and Asian (especially Macau) casinos, you can only surrender against a dealer’s ten upcard (not against the Ace).

Besides lowering the house edge, early and late surrender also have this benefit: they will stabilize your bankroll (meaning surrender will flatten the fluctuations in your bankroll) compared to a game where surrender is not offered and you have to play all your hands to completion.

If you happen to be a card counter, you should definitely be using the surrender strategy indices because it will moderate the negative swings in your bankroll; and more importantly, if you are using a decent bet spread, surrender is worth at least three times as much as the 0.07% to a counter (often even more). (For a list of the “Fab 4” strategy indices, see Chapter  10.7 in my Ultimate Basic Strategy Guide.)

Surrender is one of those rare benefits that casinos offer players, so take advantage of their generosity, especially if you play blackjack abroad, and learn when to surrender.