Can You Beat Roulette Long Term? 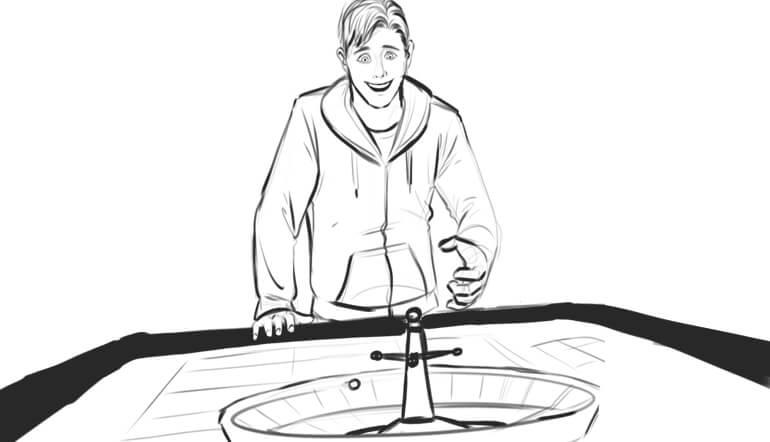 No, you can’t. Anyway that’s the answer I’d give if I were talking to you informally. However, there are a lot of if’s and but’s to this answer. Things never seem to be overly simple in the real world do they?

So follow me on this, or you can skip to here:

Take the simplest of the but answers first: If a person plays one session or a few sessions at the game of roulette and has enough good luck to come out ahead and then goes home and doesn’t play again for the rest of his life, well, this person has beaten the game and has played the personal equivalent of the “long run.”

[Please note: The long-run is an ill-defined term that means a long time which means we basically have no clear idea of what the long run is. However, we do know that betting should be based on the probabilities as there are no short-run systems that can overturn the casino’s edge over the player.]

I actually know one person who did walk away a winner and he did it at three games in his one visit to the casino. Let’s call him Vincent. He won $10 at blackjack, $28 in craps and a whopping $160 at roulette. He didn’t enjoy casino playing for some reason (oh, his wife sure did!) so he retired with his win. (Talk about quitting while you are ahead.)

So winning at roulette and then quitting for good we shall call the short-term-long-term good luck factor. Very few casino players will ever have that because it tends to go against the human grain.

Roulette is actually two different games in one. You have the wagering game; which just means what types of bets you make on the layout. To actually play you have to make a bet on the layout. These can be inside straight up bets directly on the numbers or various proposition bets on the outside of the layout. You have your choice of betting one or the other or both types as you play. So a progressive bettor can also be a straight-up bettor.

The second type of roulette game is to play against the wheel. That’s correct. The roulette wheel numbers are laid out differently than the layout numbers. The wheel numbers are generally a given number and its companion number across the wheel on the other side.So look for the number 1 and across the wheel will be the number 2. This tends to hold for both the American double-zero wheel (0 and 00) and for the European single-zero wheel (0).

[Please note: Why were the numbers laid out this dual way; one way on the layout and one way on the wheel? That was to protect the casino from having someone accidentally bet a string of numbers that were hitting because there might be something wrong with the wheel itself. Remember that wheels in the past were not perfect and grouping could occur because of that.]

Here are some of the classic layout roulette strategies:

Remember that these are all layout systems and thus they cannot give the player the edge. But, yes, they are fun to play yet that must always be in your mind when you play them. Don’t get lured in that they are long-run winners.

TRADITIONAL METHODS OF GETTING A REAL EDGE

Most roulette players have heard of the following methods. Some of which can actually give the player an edge at the game:

Do any of these still work? Well, I’ll give you some good news first: My wife, the Beautiful AP and I found a biased wheel at the Rio in the early 1990’s. I’ve written about this before. We discovered it totally by accident. When the pit boss realized what we were doing after a decently long stretch of time (for us!), he closed the table down.

Now, here is the bad news. Today’s wheels are far more sophisticated than those of the past. Biased-wheel play and big-number play were based on the fact that the wheels had imperfections in design and in the types and frequencies of repairs they needed. Some casinos ignored their wheels for prolonged periods of time.

In the past, the bumpers along the inside of the wheel helped randomize the game. This is still the case. It is estimated that the ball will hit a bumper between 25 to 50 percent of the time.

So you have bumpers, shallower pockets and one more thing: The casinos check those wheels almost daily by computer. It would be rare; if not so rare it would be impossible, for the wheel to be “off.”

And finally, what about computer play? Can’t those computers of yours get you an edge no matter what type of new wheels and computerized checking that the casinos can do?

Not really. The computers have the same problem that a visual tracker has. Those new wheels are just too sophisticated to be beaten. And there is another thing. In the past, the people who have tried this are usually caught, arrested and are unable to play roulette in prison. Even using a cell phone at a table is not allowed. A word to the wise.

WHAT ARE TODAY PLAYERS DO?

You can pretend to use the physical ideas of the past if you are fully aware that they will not gain you an edge but are fun to play. I would caution you not to over bet your bankroll – a tendency many players have when betting on multiple numbers.

If you do love betting multiple numbers then why not go to the outside of the layout and bet the propositions that you find there. Each column-bet has 12 numbers you can bet.

You can even do a form of biased-wheel play, using the big-number technique, with the column numbers. Just one number is enough to get you to bet that column. You’ve given yourself 12 numbers that can win and you can pretend that you are going after your “big numbers” by betting this way.

As time passes most players start to play faster and faster. The anticipation is watered down and the player needs more action to keep his or her juices flowing. This naturally causes the player to bet more and more money than previously because of the new speed of play.

Drinking can also lead one to play faster and faster and to begin to make too many bets and/or poor betting choices. These are things that wise players avoid. Of course, that takes quite a lot of discipline.

[Please note: Roulette players who are waiting for other players to finish placing their bets will tend to make more bets because they do not want to wait any longer. This does happen when players have been playing for a good amount of time. More bets mean more money facing the house edge. So, interestingly enough, with more players at a roulette table, the game will slow down but the number of bets you might make will increase!]

There are some layout systems which can be devastating to the player, for example the Martingale and the Grand Martingale, which are basically double up or increase your bet levels during previous losing decisions.

The Paroli system or the parley system as it is usually called, means increasing bets as you are winning. This sounds good but keep in mind the term “as you are winning” has no meaning in a game where the casino has an edge. You won in the past and that fact is no indication you will win in the future, be that future immediate or long range. You are just giving the casino’s edge more money upon which to grind.

I will write about these systems in future articles but the bottom line is simple – they can’t beat the house. I do admit that they are fun to play and having a preset plan makes the game more interesting in my view.