Can You Count Cards?

Blackjack is a lot of fun – and it’s even more fun if you’re winning. In a typical game, you have less than a 50% chance of winning, so it’s no surprise that skilled players employ various strategies to gain an edge. One surefire way to boost your odds of winning? Learn how to count cards. The process is fairly straightforward: By watching carefully, you can track the cards dealt, determine which cards still may be in the deck, and calculate the odds to make decisions in their favor.

We created an interactive card counting training tool to help players sharpen their skills and invited 2,000 people to try it out. By studying their results, we were able to get a snapshot of card counters’ skill levels in various European countries and cities. We also compiled important rules of the game, examined how certain rules affect house advantage, and more. Read on to see how you can gain an edge in blackjack. 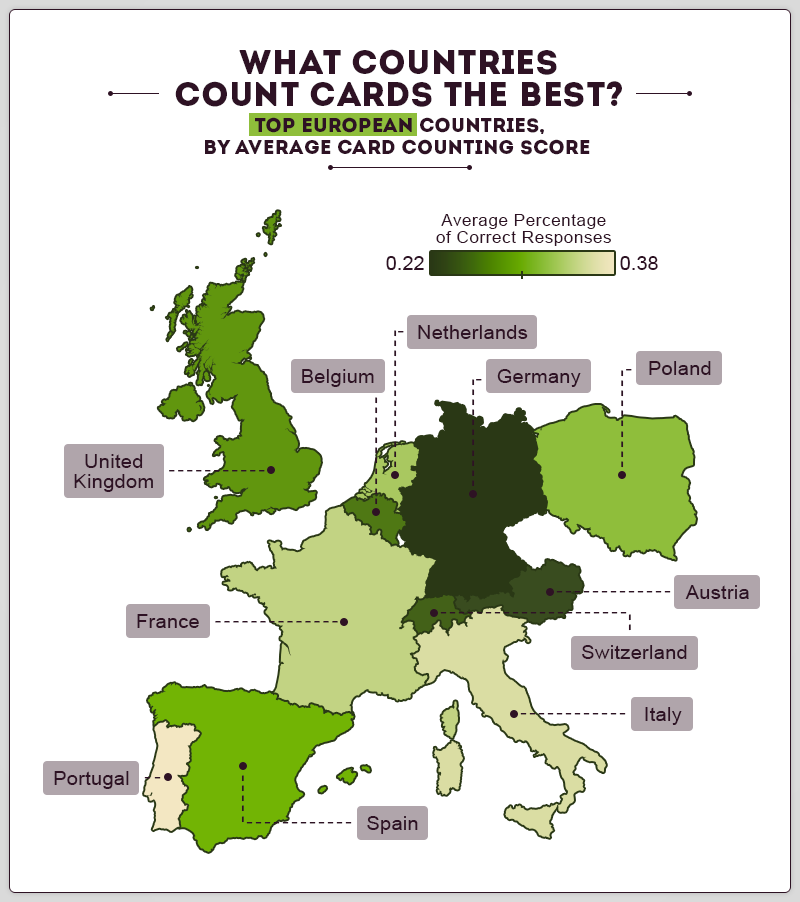 Portugal’s first-place finish comes as no surprise: The country was once controlled Macau (now a region of China), which is essentially the gambling capital of the world. Though Macau is no longer a Portuguese outpost, Portugal itself is home to 11 casinos that attract gamblers from near and far. Second-place Italy, too, has a rich gambling history; in fact, gambling fuels a surprisingly large portion of Italy’s economy. As for last-place Switzerland, although the country is home to numerous casinos, they have struggled in recent years – and online gambling is illegal. 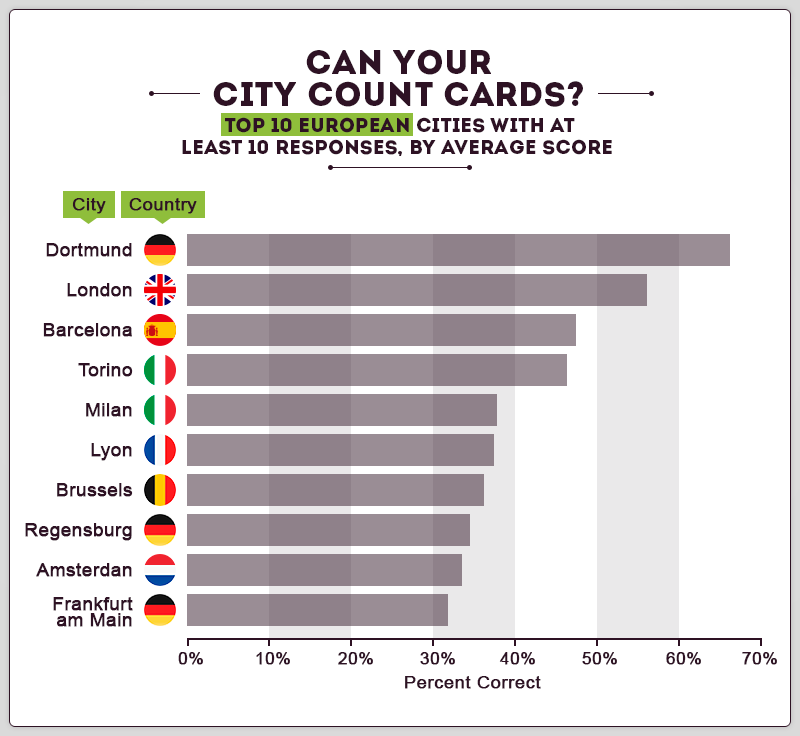 Next, we zoomed in on specific cities to see which had card counting skills that were a cut above the rest based on the results of our interactive card counting tool test. Though Germany scored the lowest as a country, residents of the city of Dortmund scored highest, averaging more than 66% correct. London residents, too, proved proficient, with a score of 56%. Barcelona came in third at 47.5%. What’s the deal with Dortmund? It’s home to one of Germany’s largest casinos, Casino Hohensyburg – and visitors can try their hand at various games, including blackjack. London, too, is home to its fair share of casinos.

On the other end of the spectrum, two of the three lowest-scoring cities are located in Germany: Frankfurt (with players that averaged less than 32%) and Regensburg (averaging just over 34%). Amsterdam rounded out the bottom three at 33.5%. 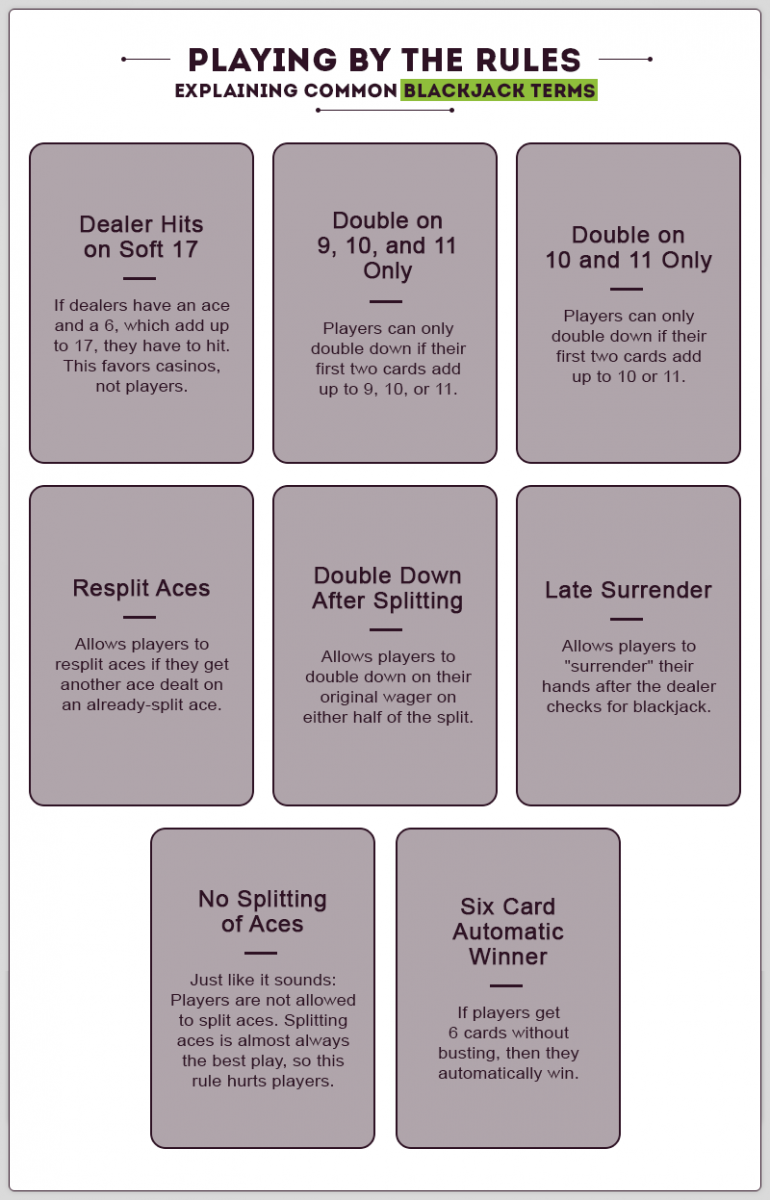 “Doubling down” ,“Pair spliting” ,“Late surrender” Sometimes blackjack games sound like they’re conducted in a different language. We rounded up some key rules to offer clarity on its sometimes confusing terms. 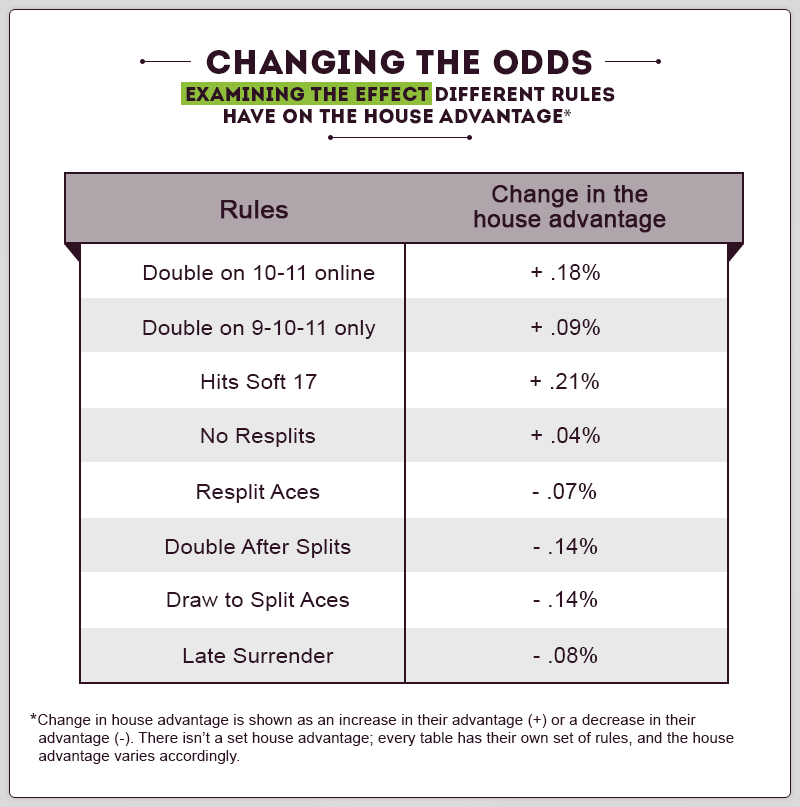 When it comes to playing casino games, one thing is clear: The house usually has the advantage. But in blackjack, some rules are game changers, slightly increasing or decreasing the house edge. Which rules work to your favor? Both “Double Down after Split” and “Draw to Split Aces” are excellent options for players because they cut the dealer’s advantage by 0.14% apiece. (The first refers to doubling down after splitting a pair that you’re dealt, and the second refers to drawing additional cards after splitting aces). 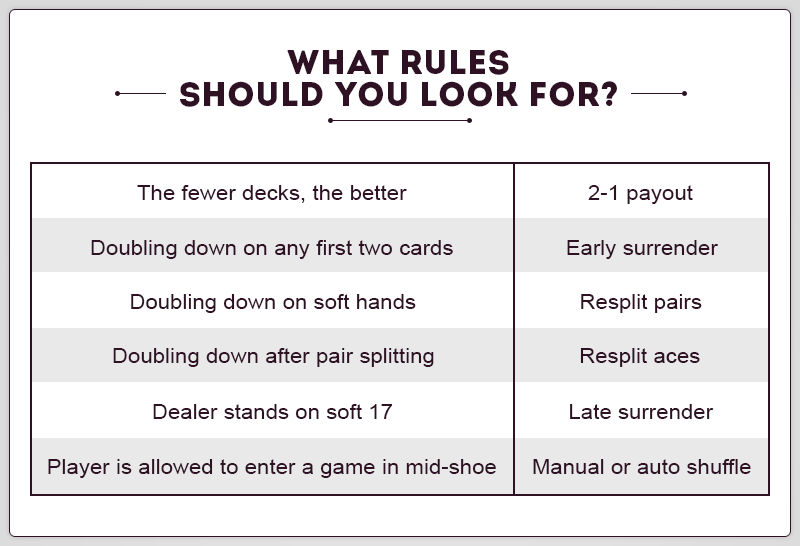 The rules of blackjack can vary greatly in different casinos. So if you really want to boost your odds, keep your eyes peeled for these player-friendly rules. And if you want to learn even more about the ins and outs of the game, explore our Ultimate Guide to Blackjack – a comprehensive primer that covers everything from strategy to betting.

Though card counting is not technically considered cheating (at least if you’re using your brain and not a card counting app!), some casinos frown upon it – and dealers, pit bosses, and casino security watch for signs of it. In a game like blackjack, though, gaining an edge can mean the difference between winning or losing.

Taking steps such as seeking tables with player-friendly rules and dabbling in card counting can boost your odds – and for many people, it comes naturally. In its simplest terms, card counting is just players keeping track of cards to see when good ones are due to be dealt and then betting accordingly. If you want to hone your skills, try our interactive card counting training tool.

We grant permission to use the images found on this page freely. When doing so, we ask that you kindly attribute the creators by linking to this page so your readers can learn more about the project and its methodology.

Card Counting
Casino Pros
About the Author
By
Louis Wheeler