All in, Literally: the Craziest Bets Ever 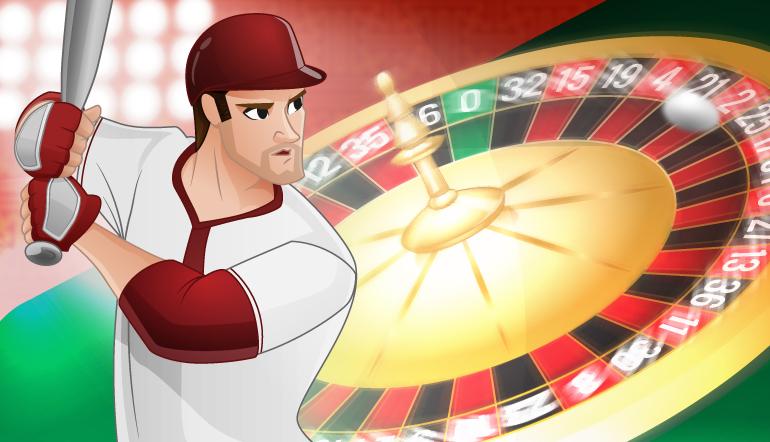 While the World Series of Major League Baseball unfolded this past fall, all eyes were not necessarily focused on the field. No, as reported by superstar handicapper RJ Bell, the most compelling thing associated with the championship games was going down in the casinos of Las Vegas.

Through an increasingly enthralling group of tweets, Bell unfurled a story that could only happen in Vegas. According to Bell, a man “younger than 30,” of “Eastern European” descent, was “spreading bets across town” – and the bets were huge. As Bell told it, the guy made an initial wager on a World Series game, won and kept letting it ride until he had accrued $8 million in winnings on the first five games.

Prior to the opening pitch of the sixth game of the Series, Bell announced via Twitter, “CONFIRMED RUMOR. Unknown Vegas bettor 5-0 in W Series – letting it all ride each game. He bet it all #Dodgers tonight!!”

Everyone who follows baseball knows that the Dodgers won Game 6. And everyone who follows Bell wondered whether or not the handicapper’s prediction that the wild gambler was poised to put down $14 million on Game 7 would come to pass. Rumor had it that Vegas casinos were all too familiar with the high-stakes player. It reached the point where bookies moved their lines when he approached a betting window.

Speculation ricocheted around as to whether or not the guy was a rich kid or betting as a beard for a large gambling syndicate. Even Bell was not sure. Then, soon before the start of Game 7, came a conversation ending tweet on the matter: “Perfect World Series ‘Let It Ride’ bettor NOT expected to bet Game 7 … Walking away with his winnings!”

In describing the bit of unbridled sports betting, Bell said, “I’ve never seen a story like this.”

But, amazing as his circumstances are, the mysterious Let It Ride baseball bettor is not the only one who’s risked it all to end up with even more. In 2004, a gamble-loving Brit by the name of Ashley Revell literally went all in on red. As he told the UK’s Telegraph, “It all started in a pub.” In fact his life-changing bet grew from the kind of goofball roulette-related question we’ve all pondered over drinks: “Wouldn’t it be great if we went to Las Vegas and bet everything on one spin.”

Most of us enjoy a moment of fantasy and dismiss the idea as patently ridiculous and far too reckless. Revell enjoyed the fantasy but failed to dismiss the idea. Then he put it into action. The 32-year-old from London sold everything he had – including a BMW, golf clubs, a Rolex, even his cricket sweater. He wired a bit more than 75,000-pounds from the UK to the Plaza Casino and Hotel in downtown Las Vegas.

Trailed by a camera crew from Sky One TV, he flew to America, went to the casino’s live roulette table, pushed forward a rack jammed with yellow-colored $1,000 chips and put it all on red. As the wheel spun and the ball moved with it, Revell experienced “a complete feeling of freedom.”

Then it dropped into the number 7 spot – Red! – and his sensation of freedom turned to total euphoria. A bottle of champagne was popped. People exploded with cheers and Revell doubled his money! Unlike the World  Series gambler, though, he did not make a follow-up bet. He was content with his 153,680-pounds. Soon after, back in England, Revell embarked on a motorcycle trip around Europe.

While on the jaunt, he met his wife and soon after launched a head-hunting firm that finds employees for online gambling companies. As to how he mustered the guts to make such a wager, Revell told the Mirror, “I always had this feeling that I would win. I never once thought about losing.”

It’s impossible to know what would have happened if Revell had dogged it, but he certainly would not have wanted to use William Lee Bergstrom as a role model. Over the course of four years, Bergstrom made two craps bets, one that yielded $777,000 and another that brought a profit of $538,000, The second one happened on March 24, 1984.

Both times he showed up at the old Binion’s Horseshoe with a valise full of cash. The move earned him a nickname: The Suitcase Man. Then, eight months later, in November 1984, heartsick over the loss of his male lover, Bergstrom made a $1 million bet at the Horseshoe and, well, the third one was not the charm. He lost the million and committed suicide nearly three months later.

Gone but not forgotten, Bergstrom left a suicide note stating that he wanted to be remembered as the “phantom gambler at the Horseshoe.”

Archie Karras didn’t kill himself, but the legendary gambler is dead to Las Vegas. From 1992 through 1994, Karas supposedly jammed $50 into more than $40 million. Fittingly, his stint of winning became known as “The Run.” Over the course of his lucky streak, Karas took down casinos, at least one pool shark and poker masters such as Chip Reese, Doyle Brunson and Stu Unger. Then the inevitable happened: Karas went on to lose $30 million of his winnings over the course of just three weeks in 1995. Much of the rest got dribbled away.

But that was not the end of it for Karas. At the long gone Desert Inn (its location is where Wynn Las Vegas now stands), he parlayed $40,000 into $1 million and got his winnings up to $4 million before blowing it all the next day. Then, three or so years later, down on his luck and down to $200 at a gaming table, he ran the meager sum up to $980,000. Presumably, that, too, dissipated. But, lucky for Karas, he’s relatively nonplussed by it all. As he told an interviewer, “Money means nothing to me. I don’t value it.”

Hopefully, he doesn’t value his reputation either. In 2013 Karas was spotted marking cards at a Barona Casino live blackjack table in San Diego, California. He received three-years probation for that transgression but it proved to be the last straw for the Nevada Gaming Commission. Before getting nailed at the Barona, Karas had already been busted four times for cheating in Nevada and the Commission used the Borona incident as a reason to place Karas in its infamous Black Book – formally known as Nevada’s List of Excluded Persons – and forbade him from entering any casino in the state.

Alas, if the 67-year-old plans on engineering one last Run, it’ll probably have to happen in Atlantic City or thereabouts.