How to Have Your Own Blackjack Party on St. Patrick's Day 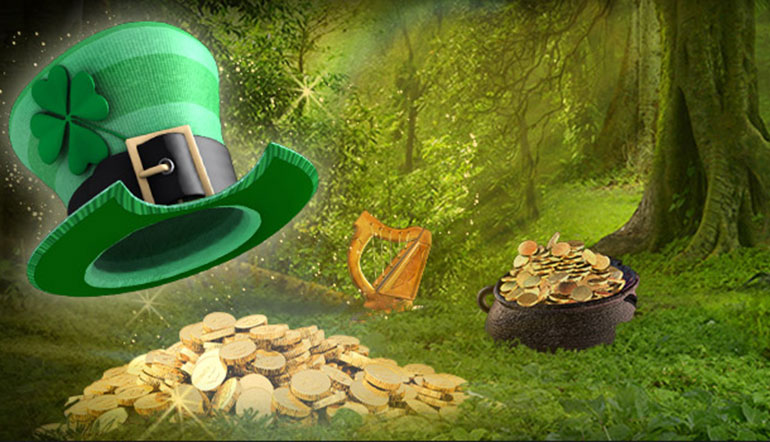 So you could go to a pub for St. Patrick’s Day, but who really wants to stand on a sticky floor at O’Neill’s attempting to get served behind a sea of furry green top hats? And what can Waxy O’Connor’s offer, that you can’t get at home? A queue for a urinal that reeks of the piss of 500 other men? A wince-making wait for the ladies that concludes in a cubicle that won’t lock, wee all over the seat and loo roll all over the floor? I’d say you’re far better celebrating St. Patrick’s Day at home. Which is what I’ll be doing, with a few friends, some cards, and enough booze to obliterate the entire cast of Riverdance.

St. Patrick’s Day is on a Saturday this year, so I don’t want to hear any s*** about coming straight from work as an excuse for looking lame. Here’s what I want to see:

Note: For each of these, everyone who does it gets an extra two chips in addition to tonight’s blackjack starter stack of ten chips – and anyone who doesn’t gets two chips forfeited.

So your guests get a choice of welcome drink – either a Guinness or a whiskey on the rocks made with shamrock-shaped ice-cubes. Not everyone wants to drink an entire pint of the black stuff, so here are some alternatives:

You’ll also need to get some shots ready, because it’s St. Patrick’s Day and every time someone gets blackjack, everyone has a shot. If you’re hosting, prepare trays of these before your friends arrive, so you don’t waste valuable drinking time in the kitchen.

So, we have two main goals here:

I’m going to suggest jacket potatoes (because, potatoes), swimming in Irish butter, and loaded with cheese and bacon (because, nice). Remember that you’ll need to put these in the oven for around an hour, so do it at the start of the evening. Don’t leave it too late, or everyone will be legless.

Forget any notion of doing this tastefully. Instead, embrace the commercialised plastic paddy paraphernalia, and adorn your living room with leprechauns. These can be bouncing from the ceiling, while Irish flag bunting bedecks your walls. You can buy a trunkful of tat on Amazon or have a look on Google.

So I could happily put The Pogues on all night. With Dirty Old Town, Irish Rover, Fairytale of New York and Fiesta, The Pogues could easily dominate the St. Patrick’s Day Party soundtrack. But not everyone’s as obsessed as I am (I once read Shane MacGowan’s autobiography three times back to back) so here are some other Irish artists to put on your playlist:

OK, so it wouldn’t be a St. Patrick’s Day Party without a bit of betting, so let’s get down to blackjack. Cover a table – or even your ironing board – with an Irish flag [https://www.partypacks.co.uk/irish-eire-cloth-flag-5ft-x-3ft-pid64387.html] and take your places. All the players should be given ten chips each – you can make these by cutting Celtic crosses out of green cardboard. If you’ve got kids, get them to do it – it counts as doing artwork with them. If you don’t have kids, and you can’t be bothered to do it yourself, just buy some green M&Ms - use these as chips instead.

The host takes the first turn at dealing, wearing a green St. Patrick’s Day hat, and an Irish flag as a cape. While everyone should, of course, have a drink in their hand at all times, when anyone gets blackjack (an Ace with a ten or a face card, ie Jack, Queen or King) everyone should do a shot. Before downing it, everyone’s got to hold up their shot and announce in the manner of Louis Walsh on X Factor: “You look like a popstar! You sound like a pop star, you are a popstar!” Then the person with the blackjack becomes the dealer, and the person who was the dealer takes their place as a player, with ten starting “chips”. If anyone runs out of chips and wants more, they can do a Riverdance for ten more chips. Note: this is the only way to buy in, and you can only do it if you’ve completely run out of chips. At the end of the night, the winner is the one with the most chips, and they can nominate anyone they choose to do a Riverdance!

HOW TO PLAY BLACKJACK ON ST. PATRICK'S DAY

Didn't manage to run a party? We can help you with our very own online party at 888 Casino, including some special casino promotions.

May the luck of the Irish be with you!