4 Craps Tips for the Short Bankrolled

Casino players have the rare opportunity to play craps with a house edge of less than 1 percent. Unfortunately for low rollers, may require wagers too large for their comfort zone.

What’s a player on a budget to do? We’ll do some comparison shopping right after we look at what’s needed to get the lowest house edge.

To get that less than 1 percent deal, players either back pass and come bets with free odds or lay the odds behind don’t pass and don’t come bets.

There is no house edge on the odds, and the house edge on pass or come combined with single odds is 0.8 percent, and that drops to 0.6 percent with double odds, 0.5 percent with triple odds and so on – the more of your bet is taken in odds, the lower the edge.

It’s the same with don’t pass and don’t come and laying the odds. At single odds, the house edge on the combination is 0.7 percent, and that drops to 0.5 with double odds, 0.3 with triple odds and so on.

If the minimum bet is $5, then a pass and two comes means bets totaling $15 are at risk. If each is backed with single odds equaling the original bets, that’s a $30 total, and that grows to $45 with double odds and $60 with triple odds.

All those bets could be wiped out at once if the shooter rolls a 7.

What if you can’t afford that kind of money? What if your bankroll dictates table minimum bets? Should you just skip craps and move to a different game?

You can still play and win at craps, although the house edge will be a little higher than in the method above.

Here are some methods that keep the house edge under 2 percent while conserving your bankroll.

TIP #1: STICK TO ONE PASS OR DON’T PASS BET, WITH ODDS

Instead of having three numbers working, go with only one.

You still drop the house edge to less than 1 percent, but instead of having $30 at risk with a pass and two comes backed with single odds, your wager total drops to $10. At double odds, the total rise to $15, with triple odds it’s $20 and so on.

Where you stop is between you, your bankroll and how much odds are permitted at your casino of choice. But you can get the house edge under 1 percent while risking only twice the table miniumum.

One drawback: Many players find this method boring. They’re drawn to the fast action and multiple wagering possibilities of craps. The remaining methods are for such players. 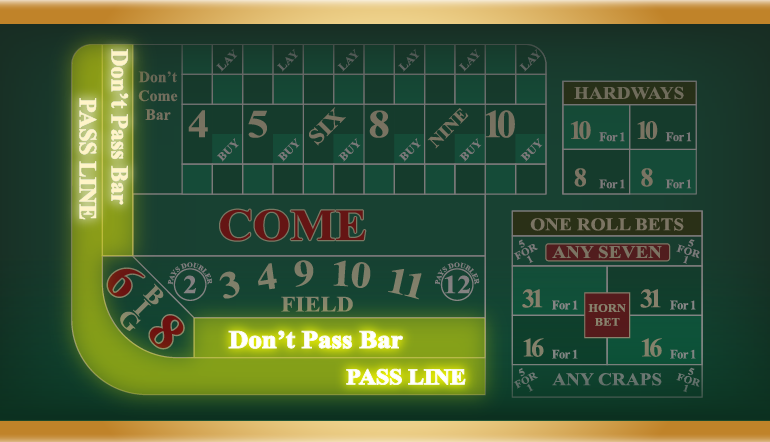 This just feels wrong to some craps players because the odds are the best deal at the table, but there’s no point in low rollers worrying about bets they can’t afford.

If they use the tried-and-true pattern of following a pass bet with two come bets to get three numbers working, then at a $5 table they would have $15 at risk at one time.

If they’re willing to limit themselves to one come bet after the pass, the risk is reduced to $10, and they can go with a rock-bottom $5 with just the pass bet.

Nowhere near as much money is at risk as when you add free odds to the equation.

Bottom line: The house edge on this method is 1.41 percent. It’s not as good a deal as those who can afford odds get, but it’s still one of the best bets offered in casinos.

The most frequently rolled number in craps is 7. Six of the 36 possible two-dice combinaions total 7

Rolled next most often are 6 and 8. There are five ways to make each of those numbers, making them numbers players love to have working.

When you place 6, you’re betting the shooter will roll a 6 before the next 7. It works the same way when you place 8 – you want that 8 to come up before a 7.

The house pays 6 and 8 at 7-6 odds, and that means you want to be in multiples of $6 to make that payoff possible.

If you want to go with just one number working, you’ll have $6 at risk at a $5 minimum table. If you be both, then the total is $12, still far less than backing multiple pass and come bets with odds.

Bottom line: The house edge on either 6 or 8 is 1.52 percent. You get a reasonably low house edge without putting too much of your bankroll at once.

For those who love to have multiple bets working, this assures you of having the two most frequent winners.

Start with $5 on the pass line. If the shooter rolls a 6 or 8 on the comeout to establish that as the point, then make a $6 place bet on the other number in this pair.

That gives you wagers totaling $11 at a $5 minimum.

Bottom line: You face a 1.41 percent house edge on pass and 1.52 percent on the place bets, giving you a nice combo with frequently rolled numbers at a reasonable house edge.

If you can afford free odds, great. You can get the best of what craps has to offer. But if your bankroll is limited – and you should never bet more than you can afford to lose -- you still can play with house edges of less than 2 percent.

These other methods may not be the absolute best in craps strategy, but sometimes the best deal you can afford is the way to go.

Craps Tips
Bankroll Management
About the Author
By
John Grochowski