Let it Ride (LIR) and Mississippi Stud (MS) have a lot of design elements in common. Both games involve no competition against the dealer. Both games pay based on the final poker-value of the player’s five-card poker hand. Both games have a minimum hand that pays (a pair of Tens for LIR and a pair of Jacks for MS). They both involve an Ante bet, and raises after cards are exposed.  They both involve cards that are face down on the table, making hole-carding and edge sorting potential methods of advantage play. But there are big differences when it comes to their vulnerability.

The most significant of these differences has to do with the total wagers that can be made. MS allows three rounds of raises and the raises can be 1x or 3x each. The AP can get a total of 10 units down. For LIR, there are only two rounds of raises and the raises are 1x, for a total wager of at most 3 units. It follows that LIR is significantly less vulnerable to advantage play than MS. For example, in hole-carding, the best an AP can do against LIR (seeing the river card) is an edge of 24.43%. For MS, the AP gets an edge of 104.47% over the house if he sees the river card. This difference is also apparent when it comes to edge sorting. As shown in this post, the AP can get an edge of 38.489% against MS by using a sort that orients the Jacks vs. all other cards. For LIR, the best the AP can do using an edge sorting approach is an advantage of 2.022%. This post described edge sorting LIR.

To begin with, I ran a number of sample sorting groups. I determined that the best option for the edge sorting AP was the simple sort consisting of Tens vs. everything else:

I want to emphasize that "Tens" refers only to the actual card with rank Ten, and not to the cards Jack, Queen or King.

The dealer’s two cards will be one of the following four groups (in the order Turn then River):

There are then 4x4 – 1 = 15 possible combinations for the distributions of Tens between the player’s hand and the two dealer face-down cards (the combination where the player has 3 Tens and the dealer has (Ten, Ten) is impossible).

The following table gives the combinatorial analysis for edge sorting LIR. This computation shows a player edge of 2.022% for the AP who is edge sorting LIR with the Ten, non-Ten sort: 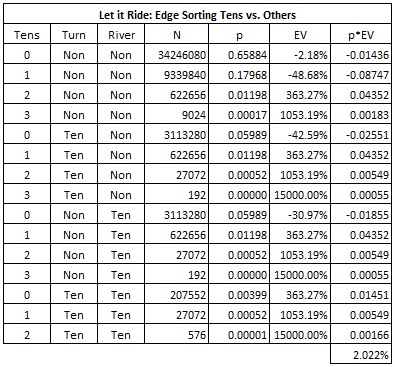 No Tens in Turn/River, Raise With:

One Ten in Turn/River, Raise With:

Two Tens in Turn/River, Raise With:

And here is River strategy for edge sorting LIR, based on knowing the player’s initial three cards and the Turn card:

River Card is a Non-Ten, Raise With:

River Card is a Ten, Raise With:

Let it Ride is the second most popular proprietary game, behind Three Card Poker. For that reason, scrutiny for advantage play is critically important for the game.  In my opinion, edge sorting LIR is not a serious threat to the integrity of the game. The AP can get an edge over the house, but 2.022% is not enough to draw in skilled players who will want to exploit this opportunity.

The following are my suggestions for protecting LIR from an edge sorting vulnerability: