In this post, I gave details about edge sorting Mississippi Stud (MS) by considering the sort where Jacks are oriented in one direction, while non-Jacks are oriented in the opposite direction. The question arises if there is an improvement over the Jack/non-Jack sort? Can the AP do better than 39.489%? This question was recently answered by Stephen How in this post he made on his blog.

The most common pay table for MS is as follows:

The house advantage for this pay table is 4.9149%. Stephen’s work used this same pay table, with the exception that a Straight pays 5-to-1. In this case, the house edge is reduced to 3.7591%, making advantage play slightly more lucrative.

Stephen considered edge sorting with various groups of cards. Along with double checking my Jack/non-Jack result, he also considered the groups {J,Q}, {J,Q,K} and {J,Q,K,A}. Stephen took a shortcut — he obtained his results by simulation and didn’t quantify the strategy. As long as he is not attempting to precisely quantify basic strategy or get an exact house edge, there is no harm is just running a bunch of hands at random. If his goal was to approximate the potential edge for various sort groups, he has more than succeeded.

Note that the Jack/non-Jack result is improved from 38.489% to 39.7% because of the improvement in payout for the straight.

Because of the extraordinary result Stephen obtained for the {J,Q,K,A} sort, I decided to analyze that sort in detail. My analysis uses the same methodology as the Jack/non-Jack sort. In what follows, let

I will use the letter “G” generically for any card in Group 1. That is,

A review of the way MS proceeds is important to a complete understanding of the way edge sorting works for the game. First, the player is dealt 2 cards, denoted P_1 and P_2. Then three cards are placed face down in front of him. These three cards will be exposed in order as the Flop (F), Turn (T) and River (R) cards.

There are then 4×8 = 32 possible combinations for the distribution of Group 1 cards between the player’s hand and the three face-down cards. The following table gives the combinatorial analysis for edge sorting MS with the {J,Q,K,A} sort. This computation shows a player edge of 61.382% for the AP. 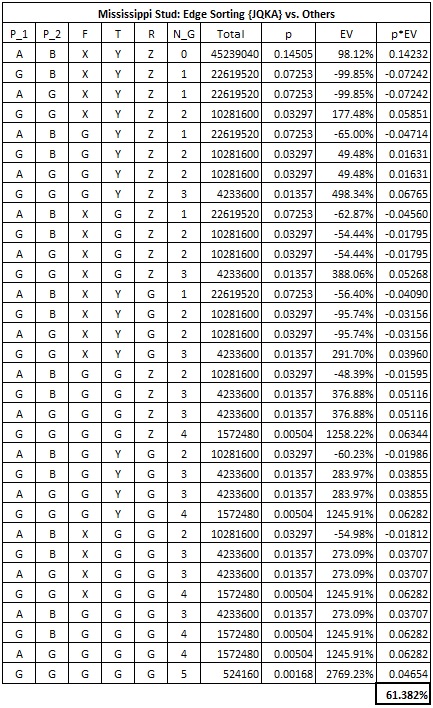 Note that the edge of 61.382% is slightly lower than the simulated result obtained by Stephen How of 63.4%. Again, this is because Stephen did his analysis with a straight paying 5-to-1, whereas my analysis assumes a payout of 4-to-1 for a straight.

In my post on the Jack/non-Jack strategy, I condensed these eight files into a summary strategy file. I am going to forgo this exercise here.

MS continues to amaze. No game comes close to this one in terms of the magnitude of vulnerabilities. If you’ve got MS, watch it closely! Even a $25 player can devastate the game.