Get Inside Let It Ride 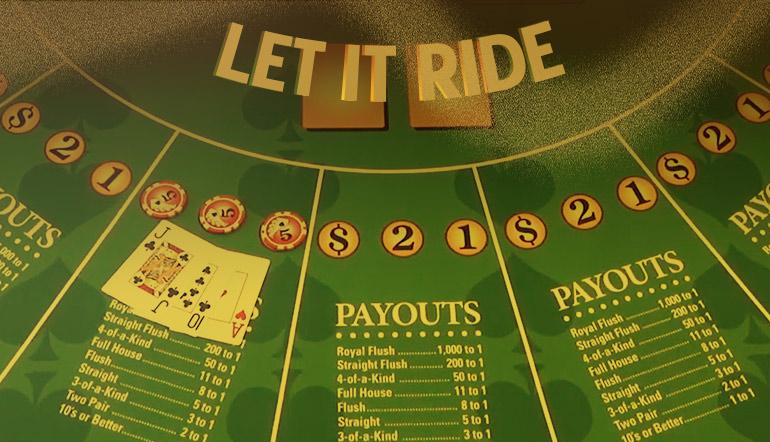 One of the hottest new table games of the 1990s, Let It Ride was one of the new breed of poker-based table games.

Building on the success of Caribbean Stud Poker, Let It Ride gave jackpot-seeking table players a way to win big for minimal risk.

Since then, Let It Ride has fallen into the background among table options at live casinos, with Three Card Poker having taken over as the prime poker-based option. But online play has given the game new life. Online casinos can offer players more options without limits of physical space, and Let It Ride is carving out a growing niche.

It's easy to learn. Let It Ride is based on five-card stud poker, and there are no draw decisions to make. There is no dealer hand to beat. You win or lose according to a pay table, much like video poker or the Pair Plus option in Three Card Poker.

Your only decisions are how much to bet, and whether to pull portions of that bet back after seeing cards.

In live casinos, Let It Ride is played with a single deck of cards and a blackjack-sized seven-player table. Cards are shuffled for every hand in an automatic shuffler.

The transition to online play is easy enough. A single deck is virtually shuffled for every hand.

Regardless of whether you're playing live or online, your spot at the table has three betting circles.

You start by making three bets of equal sizes. If you wanted to bet a total of $15, you'd put $5 in each betting circle, whether live with chips or online and clicking or tapping your bets.

You're then dealt three cards face down. Two more cards are dealt face down at the center of the table.

Your cards are yours alone. The two center cards are community cards that complete five-card hands for all players at the table.

Once cards are dealt, you may look at your three cards. Then you must decide whether to pull back your first bet or leave it in action – that is, to let it ride.

Next, the first community card is turned face up and you face another decision: pull back your second bet or let it ride.

The third bet must remain in action. Still, by giving the option of pulling back the first two, it means you must leave only  third of your original outlay at risk. If your initial bets total $15, then you could pull back up to $10 and leave only a $5 wager.

When the second community card is turned up, all players have five-card poker hands.

You win with a pair of 10s or better. If you have a pair of 9s or less or if you have a high-card hand, no pairs or better, you lose and the dealer collects any bets remaining in play.

Any winners are paid according to the following table.

If you have a winner, it pays to have all three bets in action. Imagine your first three cards include a pair of 10s. Since you have a guaranteed winner, your best play is to let all bets ride. If you bet $5 on each circle, you're guaranteed to win at least $5 on each for a total of no less than $15. If you were to pull back the first two bets, your guaranteed win would be only $15.

Of course, most hands won't be winners from the start. Risks versus rewards must be weighed in deciding whether to pull bets back or let them ride.

After seeing the first three cards, leave the first bet in action with the following hands:

After you see the first community card, leave the second bet in action if you have any of the following:

There are some fine lines being cut. Four to an open-ended straight with at least one high card gives the player an edge. The inside straight draw and open straight draws with no high cards are zero-edge situations.

That's your last decision. Once you've made it, your third bet must remain in action. Once the final card is turned up, payoffs are made.

However, with the strategy above, you'll average 1.23 bets in action per hand. Divide 3.51 percent by 1.23, and you get  a house edge of 2.85% of total action. That's sometimes called the element of risk.

You don't need big hands like four of a kind or a straight flush for a winning session, but you do need two pairs and the occasional three of a kind to offset losing streaks. You win on about 24% of hands and lose on 76%, so a share of wins with multiple bets in action is essential to profitable sessions.

Some Let It Ride tables have optional side bets. One is a five-card bonus wager, a $1 bet. There are several pay tables, most of which max out at $20,000 for a royal flush.

All pay tables have very high house edges, ranging from 13.8% to a whopping 36.5%. It's best to skip the five-card bonus bet.

The house edge is 7.1% – not as bad as the five-card bet, but still high enough that the best play at Let It Ride is to stick to the main game.