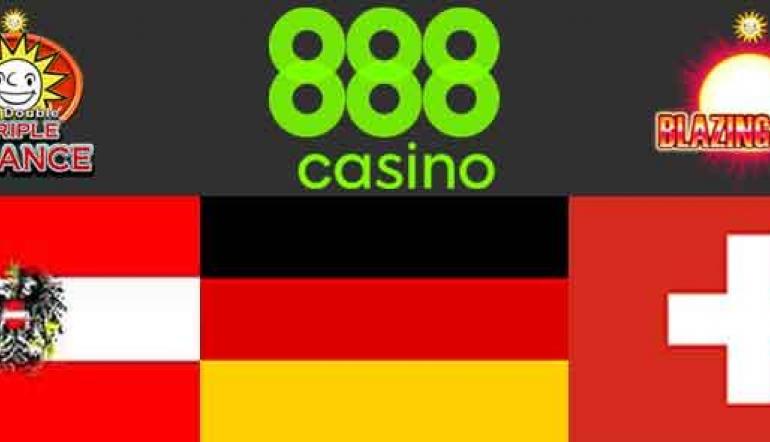 Registered 888casino players from Austria, Switzerland and Germany have 2 more reasons to celebrate with the release of Blazing Star™ and Double Triple Chance. These Merkur games offer plenty of excitement to players with a range of features designed to delight slots fans. Blazing Star™ features 5 spinning reels and 5 paylines of interactive fruit-themed entertainment. As there are 5 fixed paylines in play at all times, players can toggle the minimum and maximum coin values for their optimum bets.

The game also features a card game and a risk ladder. With the card game, you simply pick the colour of the next card – red or black, and with the risk ladder, you can ascend to higher payouts and boost small prizes into much bigger rewards. Each of the featured fruit symbols appears in specific combinations in the slot game. The highest paying fruits are the melons and grapes, followed by the oranges, lemons and plums.

The lowest paying fruits symbols in the game are the cherries. As its namesake suggests, the Blazing Star™ symbol is the highest paying symbol with the biggest payouts. Blazing Star™ slot is available on PC, Mac, Android and iOS devices to 888casino players in Germany, Austria and Switzerland.

888casino recently released Double Triple Chance slot to players in Germany, Austria, and Switzerland. This 3 reel, 3 row, 5 payline slot game has an overall RTP of 95.65%. Bets range from as little as €0.05 through €10.00 per spin.

When players land the identical symbol 9 times on the Double Triple Chance screen, the Rewin feature will be activated. One of the characteristic Merkur gaming options is the Gamble feature. Players can choose between a card gamble (choosing red or black cards), or the Risk ladder gamble feature. The Gamble option is activated by clicking on the 1:1 button.

Double Triple Chance is a medium volatility game. When 9 identical symbols form simultaneously, players can double their winnings with the ReWin Feature. Symbols include plums, oranges, lemons, cherries, double sevens, watermelons, bells and diamonds. The highest rewards are paid on the Double 77s, and when maximum bets are placed, the Double 77s pay x 1,500. Double Triple Chance is available on PC, iOS and Android devices.

Gold Cup, Dragons Treasure, and Extra Wild slot games will be available soon. All registered players at 888casino from Germany, Switzerland and Austria will be able to access these games in a real-money mode, or a practice play mode once they are released. 888casino has made a concerted effort to offer Merkur games to German-speaking players in regulated jurisdictions in Europe. This popular casino software provider offers classic games with generous jackpots and additional features.

Online Casino
About the Author
By
Ketty Fisher