Presidential Betting: A Look Ahead to 2016

Considering the Internet has been mainstream for around 20 years, US presidential races have been going on for 226 years and wagering has been commonplace since Eve hedged her bets on an apple in the Garden of Eden, it’s not surprising online political betting has exploded in popularity across the cyber universe in the last few years. In fact, it’s actually more surprising that it took this long.

Online poker made its first strides in popularity in conjunction with ESPN airing the World Series of Poker in 2003. It took another 10 years for sites like DraftKings.com and FanDuel.com to show the average mainstream sports fan that they needn’t be located in Las Vegas or wait until the office pool in March to make everyday games on television a little more interesting. Perhaps it was just the timing of the presidential election, but it seems likely that 2016 will be known as the year online betting on politics went mainstream.

Yeah, it’s a little surprising, said Todd Schneider about the lack of a boom in online presidential betting until now. Schneider, once a professional hedge fund number-cruncher has examined the electability of candidates based on betting markets. I would be surprised if DraftKings and FanDuel get into political betting anytime soon. Sounds like they have enough regulatory headaches already.

When you think about it, presidential elections and sports have an astonishing number of similarities. Both have an off-season and preseason where talking heads struggle to make predictions to fill TV airtime and newspaper pages. Once the season kicks off, whether it’s primary season for politics or a given sport’s regular season, the contenders are quickly separated from the pretenders and focus moves toward the playoffs. Be it the Super Bowl or Election Day, the eyes of America - and the world - transfix on the big moment to find out which side wins and loses.

The only major difference is until recently, plenty of money traded hands after the last whistle of the Super Bowl, while politics have not had the big-business mechanisms needed in place to handle wagering. This could be changing - especially in the U.S. where it’s still technically illegal - despite the fact the same argument could be applied to betting on presidential elections that is used on fantasy football that it’s a game of skill and knowledge, not chance, and therefore not technically gambling. It’s this fine line that allows sites like FanDuel and DraftKings to operate legally in the U.S.

“If people in the US had accessing to political betting as they do in the UK, it would thrive, said Paul Krishnamurty, a professional gambler and political analyst for a European wagering site. People who are interested in politics think betting is a good angle on it.” 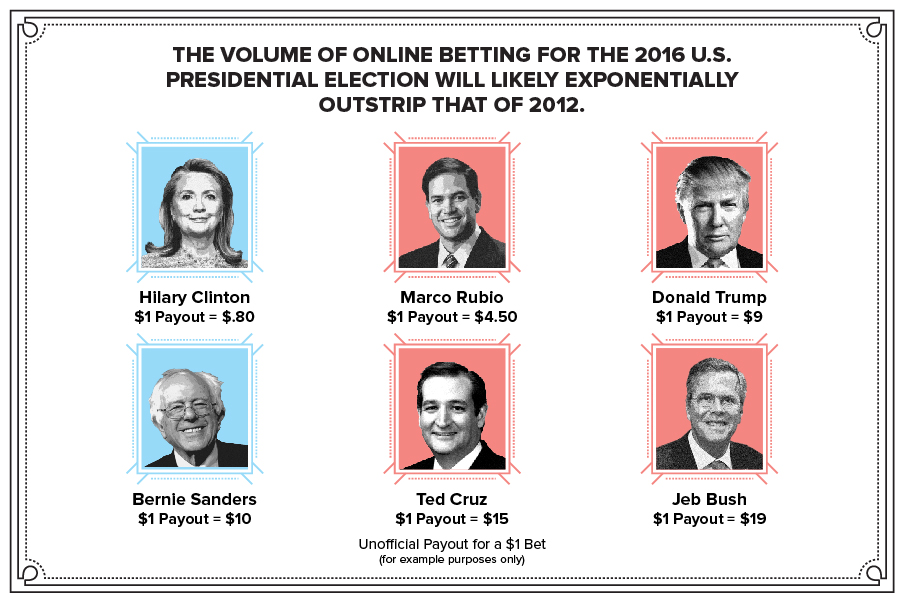 The volume of online betting for the 2016 U.S. presidential election will likely exponentially outstrip that of 2012, where very few people and very little money could swing odds one way or the other - as Mitt Romney supporters found out.

According to a New York Times article from late October that year, the online site Intrade (which treated candidates as “stock” to be traded and is now shut down) took an order for Romney that greatly altered what’s known in sportsbooks as the betting line. Romney’s odds of winning, which had been hovering in the 35-to-39 percent range, shot up to 49 percent for a brief period of time, causing enough of a stir that organizations like the New York Times began to pay attention. Things leveled off as other speculators saw the surge and reacted accordingly.

Perhaps the most interesting fact of this blip in the 2012 election was that this ripple-causing event was the result of $1,250 worth of wagering.

As long as legal hurdles prevent open betting on elections, it’s going to be hard for gamblers in the U.S. to get any real action, regardless of their intellectual acumen, said Schneider, who now develops software at Genius.com and writes essays on his number-crunching at ToddWSchneider.com

“Some experts might have an edge based on their political knowledge, but there probably isn't enough betting volume to make serious money,” he said.

Krishnamurty echoed Schneider’s sentiment about political junkies having an advantage, one that possibly can’t be found in other kinds of betting.

“I would say political betting is vastly easier to make money than any sport or game. There's virtually never luck involved and knowledge is king,” he said. “The edge can be enormous. I've never lost overall (from a portfolio of bets) on any election, never failed to make a profit on a UK leadership contest, and won five out of six Presidential markets.” 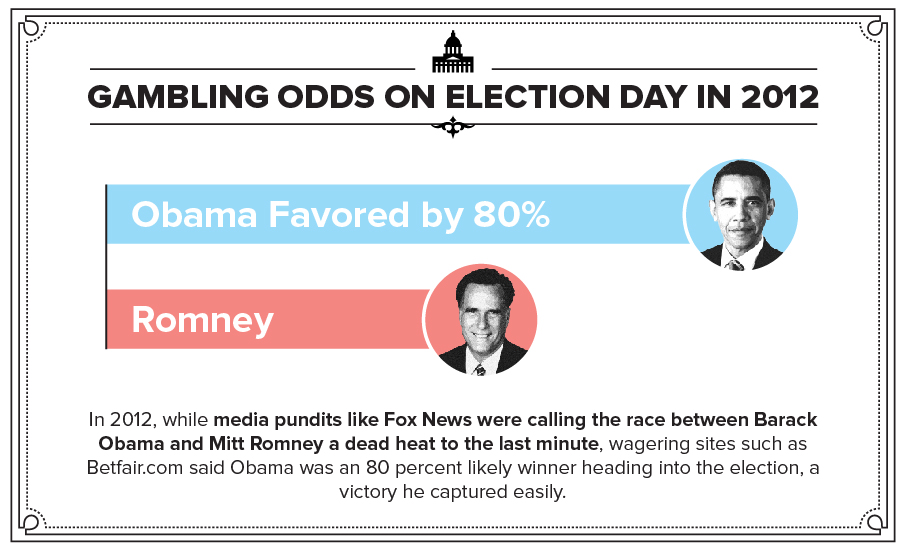 DON’T BET ON THE POLLS

It may feel to some that the presidential election season has been grinding on for months, but the reality is that the U.S. is still more than three months away from the first primaries and caucuses. The cast of characters - including a former president’s wife, a former president’s brother (and son), a conservative black neurosurgeon, and a celebrity billionaire - have left the pundits and talking heads who make their careers following such races foam at the mouth. Pollsters have been bombarding Americans trying to figure out who will capture their party’s nomination and who will eventually be elected president.

Krishnamurty is a big believer that bettors can more accurately predict election outcomes than “scientific” polls. He has accurately pointed out on his online blog PoliticalGambler.com that it’s not only in America, but in elections around the world where pundits should have followed the money and not fickle public opinion. 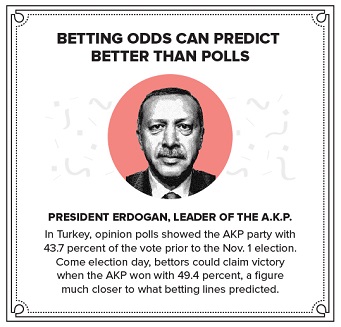 Most recently in Turkey, opinion polls showed Rayep Erdogan, the eventual winner, capturing 43.7 percent of the vote prior to the Nov. 1 election. Come election day, bettors could claim victory when Erdogan won with 49.4 percent, a figure much closer to what betting lines predicted.

Krishnamurty mentioned on PoliticalGambler that in the last US presidential election in 2012, while media pundits like Fox News were calling the race between Barack Obama and Mitt Romney a dead heat to the last minute, one of the wagering sites said Obama was an 80 percent likely winner heading into the election, a victory he captured easily.

“Betting markets are much more accurate than polls, when it comes to the final 100-day stretch of big, national elections,” explained Krishnamurty. “That’s why markets have such a good reputation and rightly so. When the market livens up, more players equal wisdom of crowds. Critically in national elections, the voters are 'normal' people as opposed to committed activists in party contests.” 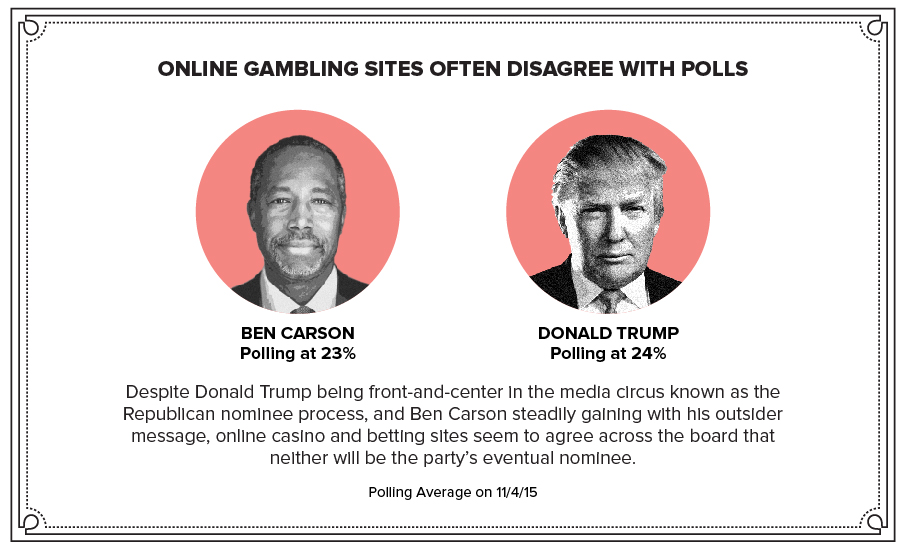 Despite Donald Trump being front-and-center in the media circus known as the Republican nominee process, and Ben Carson steadily gaining with his outsider message, online casino and betting sites seem to agree across the board that neither will be the party’s eventual nominee.

“I definitely think it's more likely that Rubio wins the nomination than Trump or Carson," said Schneider. I would personally bet on Marco Rubio over Trump and Carson combined. This isn't a bold claim, betting markets say the same thing.”

As an experienced analyst, Krishnamurty said history and his experience tells him that it’s just too early to start making bold predictions.

“I wouldn’t trust the early market regarding the current GOP race. It’s often wrong in party leaderships. (Jeb) Bush was the heavy favorite when I opposed him heavily six weeks ago. In 2008 and 2012, numerous early favorites failed badly,” he said.

“I'm not against Rubio - he's the likeliest winner, most electable - but he's not my betting tip yet because the odds are in my view, at best correct, at worst poor value,” said Krishnamurty about the prospect of Rubio taking his party’s nomination. “My main bets at the moment are Cruz at 3 percent (now 10), Carson at 4 percent, (now 8). If pushed, I'd say it will boil down to Rubio vs. (Ted) Cruz and intend to cash in if his odds continue to shorten.”

Whatever happens with the GOP, and eventually the presidential race as a whole, Krishnamurty said he thinks there is a huge opportunity to open the world of online wagering to a completely new demographic because of politics.

“I'm not sure there's that much crossover between sports/games and political bettors. The latter are often very different types,” he said. “(They are) people that wouldn't otherwise gamble, but stick $100,000 on an election because they're confident that it’s easy money.”

For what it's worth, most gambling sites currently peg probable Democratic nominee Hillary Clinton as the odds-on-favorite to win the office of President of the United States of America in November 2016, though it’s still worth remembering that the election is just under a full year away.

Will you be betting on the upcoming U.S. presidential election? Or do you feel that presidential betting is too speculative to pay off? Share your opinion by leaving a comment below: