King’s Bounty (KB) is Shuffle Master's answer to Galaxy Gaming's Lucky Ladies (LL) blackjack side bet.  Both wagers pay based on the player’s two cards totaling 20. Both side bets have a special payout for a matched pair. In LL, this pair consists of two Queen of Hearts. In KB, this pair consists of two King of Spades. Both games have a top prize of 1000-to-1 that is paid when the premium pair occurs simultaneously with a dealer blackjack. I have always assumed that KB and LL have about the same vulnerability to card counting, with the Ten Count working for both.

The most significant difference between the two wagers is that KB is not available for two decks. Only one pay table is given in the documentation I found online (kings_bounty). This pay table gives a house edge over the statutory maximum of 25% for two decks. Without evidence of a pay table suitable for two decks, I must conclude the game was not designed to be used in this situation. If a reader finds KB on a two-deck game, please forward the pay table to me. In the mean time, this analysis is limited to the six-deck version of KB.

The payouts for winning KB bets are as follows. Only the highest payout is paid:

The following table gives the combinatorial analysis for the KB bet for 6 decks:

I computed the EORs for KB to see if a card counting system based around Kings was possible. The following table shows that Kings are slightly more important than other ten-valued cards, but this significance is not enough to generate a different counting tag for all Kings. The betting correlation for the Ten count is a very strong 0.987. 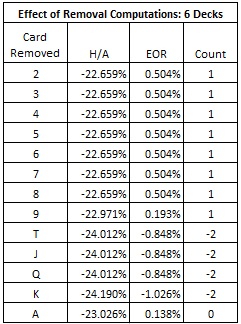 The following graph shows the potential edge the AP can get over the house against KB using the Ten count.  The edges that are possible for the AP at high true counts are impressive: 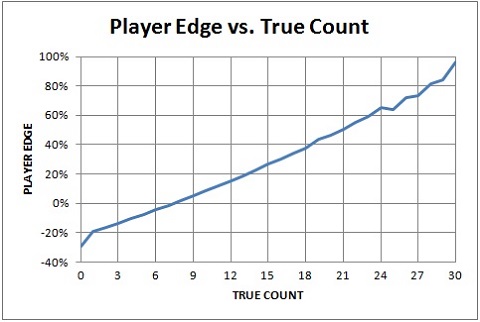 A separate tag for the King of Spades can be used to strengthen this count, similar to the tag of -6 used for Queen of Hearts in the six-deck version of LL. This modification gives the Optimal KB count. The Optimal KB count has the following tags:

Here are the results of a simulation of one hundred million (100,000,000) six-deck shoes of KB, using the Optimal KB count:

Clearly, KB can also be attacked in the six-deck version by shuffle tracking. Any slug of face cards that is trackable will give the AP a strong opportunity.

The following are my recommendations for protecting KB: