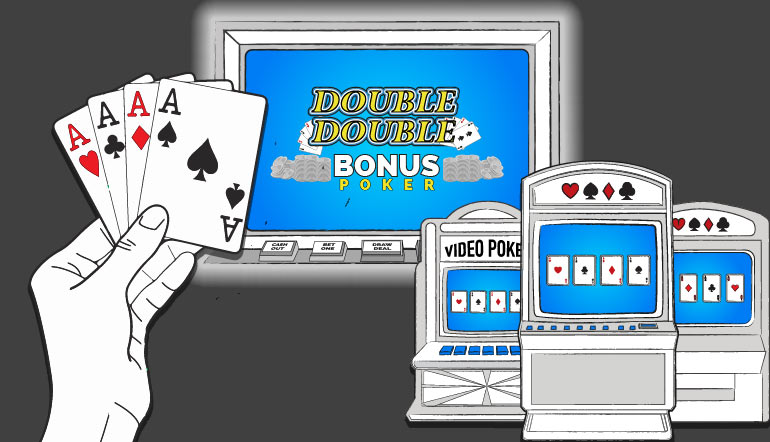 The major attraction of the game, regardless of whether you’re playing online or offline, is the huge 2,000-coin jackpot when you wager five coins and draw four Aces with a 2, 3 or 4 as the fifth card. If you have a 5 or higher as the fifth card, then your return for four Aces is 800 coins when you bet five – the most frequent maximum bet on video poker games.

That combination pays 400-for-1, so for the standard five-coin maximum bet the return is 2,000 coins, or fully half as much as you’ll get on those all too rare royal flushes.

How aggressive should you be in chasing that jackpot? Should you hold a low card along with three Aces when drawing for the fourth Ace? Should you break up full houses that include three Aces? When you have two pairs, including two Aces, should you discard the other pair?

Let’s us 9-6 Double Double Bonus Poker as an example, where the “9-6” refers to a 9-for-1 payback on full houses and 6-for-1 on flushes. With expert play, that game returns 98.98 percent – a house edge of just over 1 percent making it a game that gives you a fighting chance to win.

When the Aces come, you’ll win big. So let’s look at the best plays maximize your return.

SHOULD YOU HOLD A LOW CARD WITH THREE ACES?

The key to strategy in this situation is the need to balance opportunity to draw the big jackpot against maximize the frequency of drawing the fourth Ace.

With that in mind, the strategy that will get you the most out of Double Double Bonus is to hold three Aces and discard a kicker.

If you hold A-A-A-2, there are 47 possible draws, representing the 47 cards you didn’t see on the initial deal.

What if we maximize the chances at four Aces instead by holding A-A-A and discarding the 2 as well as the 8?

However, you improve the hand so much more often when you discard the 2 that the average payback is higher on Ace-Ace-Ace than if you hold the 2 with the Aces. Discarding the 2 is the smart play.

SHOULD YOU BREAK A FULL HOUSE TO HOLD THREE ACES?

The answer is “yes,” even though it means sometimes you’ll settle for a lower payoff.

If you hold a full house, your return is a nice, safe 45 coins.

If you hold three Aces and discard the other two cards, then the average return depends on just what you’re discarding. If that pair is 2s, 3s or 4s, then you have a lesser chance of drawing a low card kicker to go with a possible fourth Ace than if the discarded pair is 5s or higher.

Regardless of the rank of low cards, those draws will include 968 three-of-a-kinds for 15 coins each and 67 full houses for 45 coins each.

Either way, the average return is higher if you break up the full house to go for the fourth Ace. If you can’t bring yourself to give up the certain 45 coins on the full house, it’s your decision, but the chance at the big 800- or 2,000-coin returns make holding Ace-Ace-Ace the better percentage play.

SHOULD YOU BREAK UP TWO PAIRS TO HOLD TWO ACES?

You’ve seen the principal on how video poker hands are evaluated: Every possible outcome is considered, and an average return calculated.

For this hand, let’s just go straight to the answer: Yes, it’s a better play to hold a pair of Aces and discard the other three cards than to hold a second pair.

Dealt Ace-Ace-2-2-7, the average return per five coins wagered is 9.51 coins when you hold Ace-Ace, compared to 8.40 for holding both pairs and 7.83 for holding one of the 2s along with the Aces.

In every case, the highest return come from holding the Ace pair and discarding the rest.