How to Play Multi Strike Poker 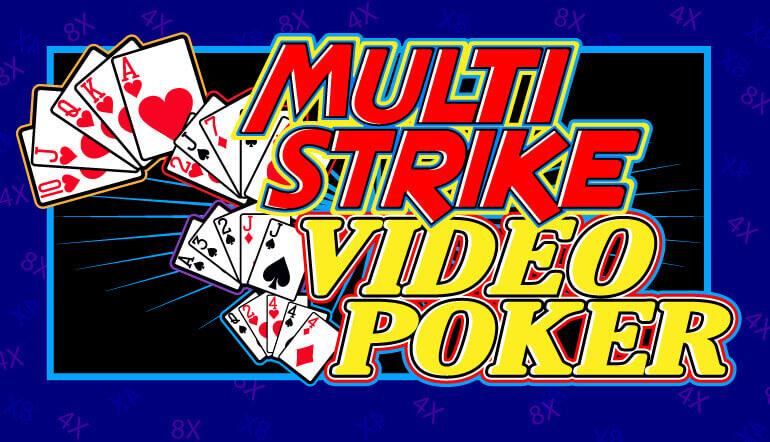 Multi-Strike Poker has been with us since the early 2000s – multiple lifetimes as electronic casino games go. That it’s held onto a niche in casinos and is also available on online casino after all this time speaks to the quality the concept.

It’s an intriguing game that can create some huge wins, but getting the most out of Multi-Strike requires some changes from normal video poker strategy.

THE BASICS OF MULTI-STRIKE POKER

If winning hands were the only way to advance, Multi-Strike would be a much tougher game. To use 9-6 Jacks or Better as an example, about 45.4 percent of hands are winners given optimal strategy.

To make Multi-Strike an attractive game for players, Leading Edge added free passes to move you up a level. They occur often enough that you’ll advance from each level about 50 percent of the time. 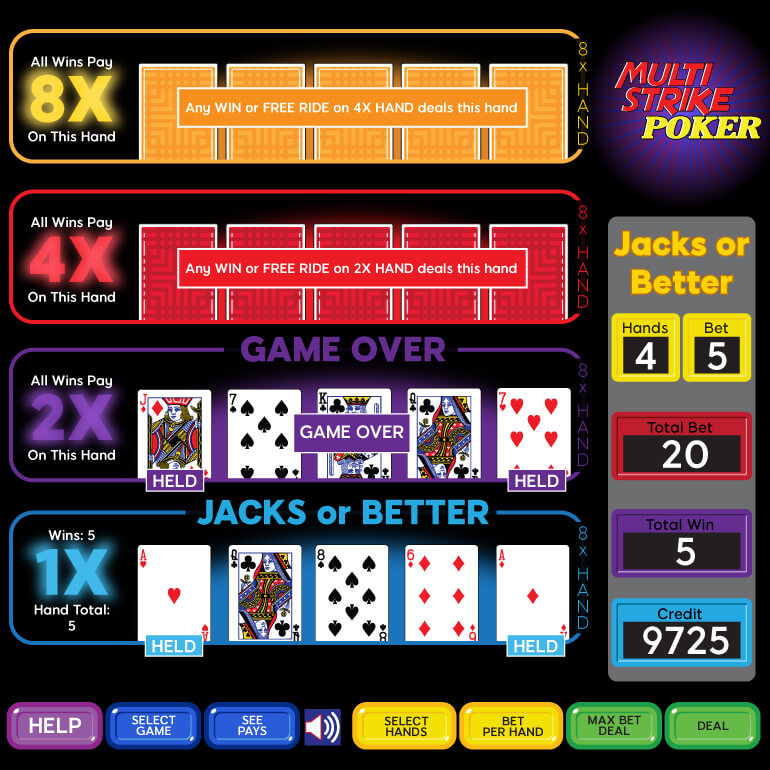 Instead of the best play being the one that will bring the highest average return, that has to be tempered with plays that bring more frequent wins.

One feature of regular video poker strategy is that the play that wins most often doesn’t necessarily win the most money.

Let’s use 9-6 Jacks or Better as an example. Holding low pairs from 2s through 10s win less often than holding one or more unpaired high cards. But the low pairs bring a higher average return, so they rank higher than unpaired Jacks or higher on strategy charts.

In Multi-Strike, the need to advance is so strong that if you have two or more unpaired high cards at the 1x level, you’ll want to hold them instead of a low pair.

The strategy switches change at each level. The higher you get, the fewer changes are called for until at the 8x level, Multi-Strike strategy is the same as single-hand strategy.

Specifics change depending on game, but a grounding in 9-6 Jacks or Better strategy is a good place to start. Check out a sampling of how Multi-Strike strategy changes from level to level in that game.

Four parts of a straight flush: In regular 9-6 Jacks or Better, you’d hold a hand such as 8-9-10-Jack of another suit even if the fifth card was another Jack. In Multi-Strike, it’s better to hold a high pair to guarantee advancing a level.

There is an exception. If your four parts of a straight flush are 10-Jack-Queen-King, then you have a chance with a royal with an Ace as well as a straight flush with a 9. In that case, you’d still hold all four instead of a high pair.

But in Multi-Strike, high cards have extra value because of the advancement factor. Adapted strategy doesn’t call for you to hold single high cards instead of low pairs, but it does call for discarding low pairs to hold any two high cards.

Given a hand such as 8 of spades, 8 of diamonds, 3 of clubs, Jack of hearts and Ace of spades, you’d hold 8-8 in regular Jacks or Better. In Multi-Strike, you hold Ace-Jack instead to maximize chances of getting to the 2x level.

High cards of the same suit are more valuable than high cards of different suits because they leave open royal flush and straight flush possibilities. But regardless of whether the suits are mixed, holding two or more high cards instead of a low pair is a play to make at the 1X Multi-Strike level.

On other four-card straights including high cards, the high cards are more valuable at this level than the straight potential. For example, a chart at wizardofodds.com lists the expected value of 8-9-10-J as 1.68 coins, but lists the Jack by itself at 1.79.

With no high cards, discard four-card straights at this level.

The main difference comes on straights. Four-card open-ended straights with no high cards, such as 4-5-6-7, don’t rank high on the strategy table, but they’re not throwaway hands. If the hand also includes a high card or a pair, hold that while breaking up the straight. If not, go for the straight.

With four times pay and only one more level to advance, strategy starts to become more like regular Jacks or Better.

However, continue to hold a high pair if you have an inside draw to a four-card straight flush, such as 7-8-10-Jack suited and a Jack of another suit.

Low pairs: At earlier levels, low pairs were pushed behind multiple high cards regardless of whether they were suited or of mixed suits.

At 4x level, three-card royals remain ahead of low pairs. So does the four-card open-ended straight 10-Jack-Queen-King of mixed suits.

However, low pairs move ahead of two high cards, suited or unsuited, and three or four unsuited high cards.

Four parts of a straight: Ace-King-Queen-Jack of mixed suits returns to the strategy list. At 4x level, it’s a better play than King-Queen-Jack.

Also, 8-9-10-Jack of mixed suits is a better play than holding the Jack by itself. However, with multiple high cards such as 9-10-Jack-Queen, it remains better to hold the high cards and skip the straight draw.

Advancing ceases to be factor when there are no more levels to advance. At the top tier, your best play is to follow regular optimal strategy for 9-6 Jacks or Better.

Specific plays and adjustments will differ for other games. Every video poker game has its own quirks. But basics from Multi-Strike Jacks or Better – especially downplaying low pair and straight draws at early levels – will help you get the most out of any Multi-Strike game.