Playing Video Poker: Sometimes You’ve Just Got to Be Lucky 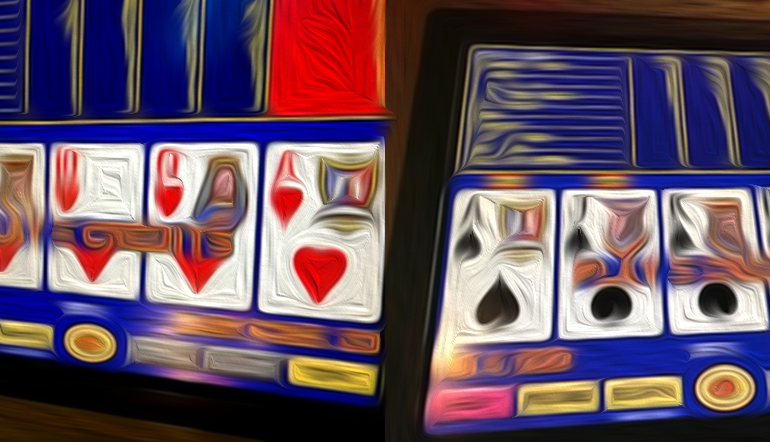 (Note: I’m not telling this story just to brag about my good fortune but rather to use it as a teaching example for video poker players.)

In a previous article, I bemoaned my long royal flush drought in which I played about 270,000 hands between one royal flush and the next one.  Then boom … I found myself in another mini-drought beginning in July 2019, lasting until the middle of December 2019. I was hoping for one more royal before the year ended. Here’s what happened.

During that period, I played about 55,000 hands without getting a royal. The math says that you should expect a royal flush once in about every 40,000 hands on average.  The latter “on average” means after many cycles of 40,000 hands. In any one cycle you may hit one (or more) royal flushes, or perhaps none (as it happened to me); but it will, over time, average one royal per 40,000 hands. (The latter varies slightly depending upon the game you play but for the purpose of this article I’ll use 40,000.)

So here it was, the second week of December, and I’ve already played slightly more than one cycle of 40,000 hands without a royal; frustrating … yes. The game I was playing for the past three months was 8/5 Bonus Poker, which has a theoretical return with perfect play of 99.17%. (I usually play 9/6 Jacks or Better or NSU Deuces Wild, which have a higher theoretical return; however, the casino that offers the 8/5 Bonus Poker has a much better bounce back and free play program and, consequently, a higher overall return.) 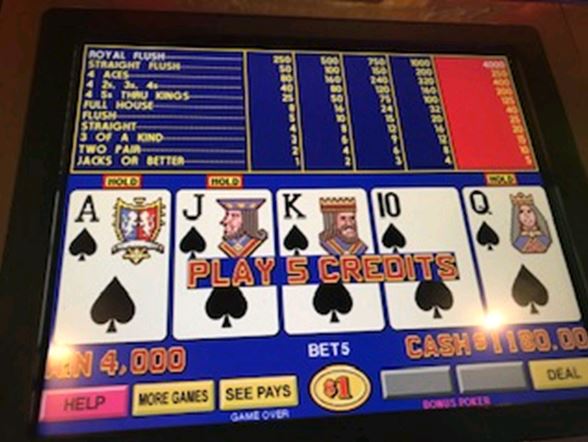 Going through long stretches of sessions without a royal flush can be very frustrating for video poker players. No matter how skillfully you play, sooner or later you will experience this, and when it happens, your bankroll will be heading south simply because the royal flush accounts for about 2% of your expected return. This is why having enough bankroll is so important if you want to be successful playing video poker. How much bankroll? That depends, of course, on how long you play, what game you are playing and the denomination. But fear not … there are tools available that you can use to determine your short- and long-term bankrolls. (The one I use is the software program Dunbar’s Risk Analyzer for Video Poker. You’ll also find good information on bankroll requirement in these books: Video Poker for the Intelligent Beginner and Video Poker Optimum Play.) I encourage you to be diligent and determine your bankroll needs and then set aside that money in a special account (e.g., money market) that you use solely for playing video poker.

Here are some more tips to minimize the drain on your bankroll during droughts.

There’s another side to playing video poker that you need to keep in mind.  Sometimes, even against long odds, you can get lucky and draw just the cards you need for a royal flush.  For example, the first royal I hit (above) had long odds of 1 in 1,081 for drawing the two cards I needed; yet, I lucked out and hit the royal. But wait … if you think this was a lucky draw, it pales in comparison to what happened next.

Exactly one week later, I played another session (this one on December 19) in the same casino. The session was extremely frustrating because I was dealt four cards to the royal on five different occasions, and each time I couldn’t get the one card I needed for the royal. (Statistically, you can expect to be dealt four cards to the royal about once every 47 hours, assuming a leisurely 600 hands played per hour. Yet, here it was three hours into my session and I had already been dealt four to the royal five times.)  With odds of only 1 in 47 to get the card I needed for a royal, it was frustrating when I came up empty-handed five times in three hours. Then this happened.

On the very next hand, I was dealt a Jack of hearts and four garbage cards. My only play was to hold the Jack and draw four cards. I was hoping to get at least a high pair and get the $5 back that I bet on the hand. I mean the odds of drawing four cards that you need for the royal are very long: 1 in 178,365. So I held the Jack of hearts, hit the draw button and watched in shock as the following cards appeared on the video screen in this order: King, ten, Queen, and Ace of hearts (see photo). I had really lucked out and beat the 1 in 178,365 odds when I drew the four cards I needed for a royal flush. 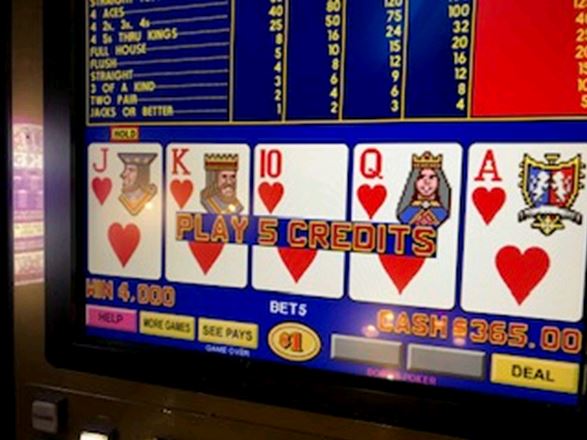 The moral of this story is this. Prepare yourself for that inevitable royal flush drought, and here are some tips that can help you.

Lastly, never say never when you play video poker because you might luck out (as I did) and hit a royal flush even when the odds are very long.