What are the Odds? 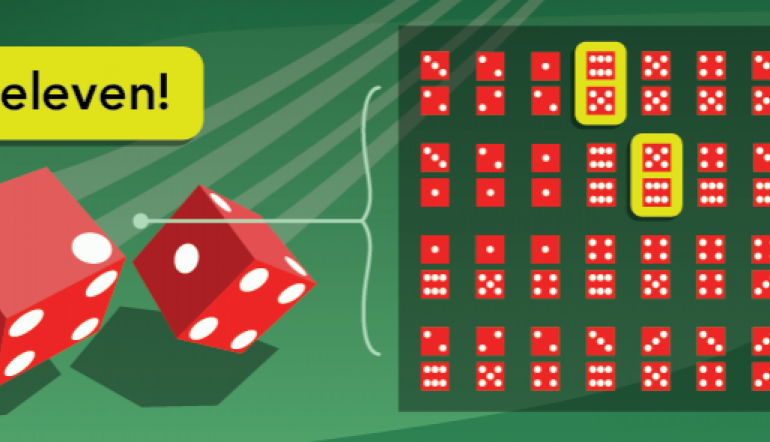 What Are the Odds?

Every game in a casino is one of probability. While certain bets you make and actions you take are under your control, the outcome is always dictated to some degree by chance. It’s how you weigh these chances by calculating probabilities and wagering accordingly that will determine whether you win or lose in the long run.

Probability is simply the likelihood that a certain event will occur. Flip a coin and the probability of getting heads is 50%. Pulling the Ace of Spades in a single draw from deck of cards has a probability of 1.9%. When you get into complex topics like making certain hands in a game of poker, these numbers can get very large and extremely complex.

The 52 cards in a deck don’t sound like a lot, there is a vast number of ways a deck of cards can be arranged. Specifically, a deck of cards can be arranged in 52! ways, or 52 x 51 x 40 x 39 … all the way down to 3 x 2 x 1. That adds up to a number best represented in scientific notation: more than 8 x 1067, or an 8 followed by 67 zeroes. As the video explains, that is so many possibilities that every time a deck of cards is shuffled, it’s almost certain that that specific arrangement of cards has never existed before in the history of the universe.

Calculating the odds isn’t always easy, so we’ve done some of the work for you, looking at four major casino games and some of the most common probability questions for each one. Next time you sit down at a table, think about the probability behind the game you’re playing. You might be surprised at how quickly it makes you a stronger player.

Blackjack – Will the Next Card Make You Bust?

Most hands of Blackjack involve some degree of risk. Hitting on 12 has a little risk. Hitting on 16 has a lot. Most gamblers inherently understand that this risk increases as the total value of their hand goes up… but what are the odds of busting on your next card with each of the “danger” hands, 12 through 16?

Here’s a look at the odds. (These odds are based on a multi-deck shoe.)

Remember: Smart Blackjack strategy takes into account what the dealer is showing. For example, though the odds of busting when hitting on 12 are relatively low, if the dealer is showing a 6, the odds are sharply in your favor if you stand with the 12, as the dealer is more likely to bust when he takes a card. If you’re a new player, a standard Blackjack “cheat sheet” will help guide you on when to hit and when to stand.

Roulette – How Many Times Can You Double Up?

From a probability standpoint, Roulette is comparatively easy to understand. Each spin of the wheel is independent, so (unlike Craps) your odds of winning don’t change based on the results of the previous spin.

From a pure mathematical standpoint, this randomness makes Roulette both easy to play and a lot of fun. Some of the most popular bets are the even money wagers, of which there are several on the board. These include even/odd, 1-18/19-36, and the ever-popular red/black. Bet on either side of these wagers and you double your money if the ball lands on your selection.

The trick with Roulette is that the actual probability of winning any of these bets is slightly less than 50%. That’s because of the addition of the green 0 and usually a second 00 spot on the wheel. 0 and 00 count as neither even nor odd, red nor black, and high nor low. For all even-money bets, if the ball lands on 0 or 00, you lose.

So let’s look at a hypothetical wheel with just one 0. You drop $100 on one of the even money selections outlined above (the odds are the same for all six options) and let it ride. How long can you leave your chips on the table? Here are the odds of winning at various points in the game.

How does adding that extra 00 spot change things? You might be surprised.

That one extra spot shaves your odds of winning five in a row down to only 2.4%.

Remember: These odds are only accurate before the first spin. If you’ve already won four bets, the past won’t influence what happens next: Your odds of winning the next bet on a 00 wheel is back to 47.4%.

Craps – Will You Make Your Point or Crap Out?

In Craps, the game involves throwing a pair of dice, adding the two together to determine a number called the point. The point can be 4, 5, 6, 8, 9, or 10. In simple terms, the shooter rolls until one of these numbers comes up. Then the real fun begins: The shooter has to keep throwing the dice until the point comes up a second time. If the dice come up 7, the original bet is lost.

Here’s a look at how the odds of making your point change depending on the number:

Since 7 is the most commonly rolled number when throwing two dice, the house has a variable advantage any time you’re trying to make any point. However, the closer your point is to 7, the more likely you are to win. For more insights, our Casino Pro Frank Scoblete reveals the 5 hidden secrets of Craps.

Poker – Will You Catch a Straight, Flush, or Straight Flush?

“Suited connectors” – say the 6 of clubs and the 7 of clubs – make for a complex starting hand in poker. On one hand, these two cards give you lots of opportunity to make a huge hand down the road – either a straight, a flush, or a monster straight flush. But what are the real odds of that happening, given just five more  to be revealed on the board?

The odds are worse than you think, and it’s why poker experts often advise caution when trying to make a hand out of suited connectors. Presuming you have middle tier cards like a 6 and 7 (the odds of catching a straight or straight flush are worse with very high or very low cards, because there are fewer ways to make those hands given the cards remaining in the deck), here are the odds that you’ll actually complete one of these hands on the flop (the first three cards dealt face up).

Now, what are the odds of completing those draws if you have four cards to a hand (say 5-6-7-8 or four unconnected clubs) and two more cards to be dealt? (For the sake of this example, we’re presuming the straight draws are open-ended.)

As you can see, once you have four of the cards you need to make a big hand, the odds of completing that hand get much better, and you can play a bit more aggressively.

Use Probability To Your Advantage

When playing any casino game, it’s important to have at least a basic understanding of the odds behind any decision. Some choices may seem like they have good odds but are actually less likely than you think, while other choices may seem improbable while actually having relatively good odds. Every game in the casino is a question of math, so next time you’re facing a big hand or a hot roll, run some quick numbers (or consult an article like this one) to help get the best chance at winning.

Casino Pros
About the Author
By
Christopher Null