What are the odds of the 88th Oscars?

The glitz and the glamour of the red carpet returns to Hollywood this Sunday, as the 88th annual Academy Awards rolls into LA. Held at the Dolby Theatre in the heart of Tinseltown, the Oscars gives the film industry its opportunity to showcase its finest talents – from actors and actresses, to make-up artists and special effects experts.

With a whole host of awards up for grabs, the competition across all categories couldn’t be fiercer this year. But how do we know who is in the prime position to win? Are the front-runners guaranteed success, or will an underdog shock the Academy and come out on top?

To help you decide who and what to wager on, we've delved deep into the archives to pull together an insightful guide on the possible outcomes of the key fields and other areas of interest at this year's Oscars. 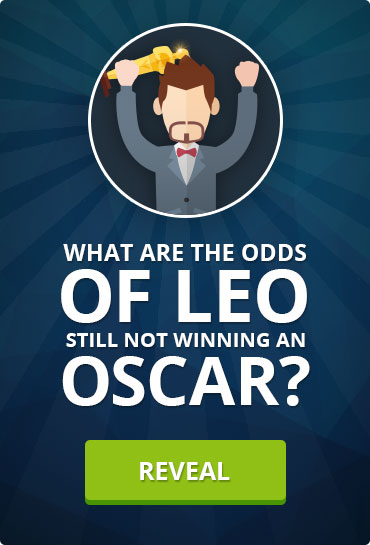 WILL LEO FINALLY WIN AN OSCAR?

It's the question on every film buff's lips – will Leonardo DiCaprio finally break his 22-year duck and win an Oscar?

After five previous nominations, and a whole host of internet 'memes' highlighting the fact he has never won, DiCaprio is widely regarded as one of the finest acting talents never to be acknowledged by the Academy. His latest role as Hugh Glass in The Revenant has already scooped him the Best Actor gongs at both the Golden Globes and the BAFTAs, and DiCaprio is widely expected to go on and complete the hat-trick of awards at this weekend's Oscars. He's the current favourite with critics and bookmakers alike.

But do the odds stand in his favour?

Well, going on his previous results and trying to guess the odds, you might be sceptical. Of the 194 awards DiCaprio has been nominated for, he has gone on to win 76 – a conversion rate of just over one award for every two-and-a-half nominations. But compared to Hollywood big-hitters who have struck gold in the Best Actor category, his stats just don't match up. Daniel Day-Lewis, a three time Oscar winner, has won 134 out of 193 nominations, whereas back-to-back Academy Award winner Tom Hanks averages a gong for every one-and-a-half nominations (76 from 113).

When it comes to the Oscars, Day-Lewis’ and Hanks’ win-to-nominations stand at three-to-five and two-to-five respectively. DiCaprio is currently zero-to-five (although one nomination was for a producing role on 2014's The Wolf of Wall Street).

Is it just a case of the Best Actor field being more competitive whenever DiCaprio is nominated? This year he's up against 2015 winner Eddie Redmayne, Michael Fassbender, Matt Damon and Bryan Cranston – four top-level Hollywood actors who each could win in their own right. And in the past, the performances he has lost to are once-in-a-life-timers: think Matthew McConaughey in Dallas Buyers Club and Philip Seymour Hoffman's lead role in Capote. Not to mention his Best Supporting Actor loss to Tommy Lee Jones back in 1993.

All of DiCaprio's performances have been spectacular – The Wolf of Wall Street, Blood Diamond, The Aviator and What's Eating Gilbert Grape have all highlighted his innate acting talent and diversity. You (and probably Leo himself) get the feeling that this just isn't meant to be.

It doesn't get much prettier when you look at his total of five nominations either. Only six people have currently had more nominations than DiCaprio and haven't won an Academy Award. Glenn Close, Deborah Kerr and Thelma Ritter each have six, Richard Burton accumulated seven nominations and Peter O'Toole currently leads the way with eight unsuccessful nods.

With a week to go until the 88th Academy Awards, DiCaprio is currently the hot favourite to claim the Oscar – he's rated as short as 1/50 with some bookmakers – so perhaps this could be the year to place a wager on The Revenant star. 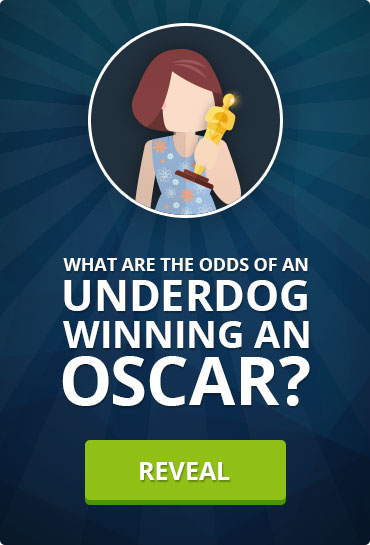 CAN WE EXPECT AN UPSET?

Over the previous 87 years of Academy Award ceremonies, some of the unlikeliest films and performances have been victorious, despite other major governing film bodies seemingly choosing the most obvious and, in many cases, the "dead certs" for the prize.

So despite the aforementioned Leonardo DiCaprio being the resounding favourite for the best actor award, it wouldn't be too out of the ordinary to see Bryan Cranston claim the gold statue for his role in Trumbo.

Adrien Brody's 2003 win for his role in The Pianist is the epitome of going against the grain – a choice that no film critic would have predicted and arguably the biggest Oscars upset. Brody was up against some huge names - Michael Caine, Daniel Day-Lewis, Nicholas Cage and Jack Nicholson – when he was nominated for the Best Actor award. Add on top of that the fact that every other major awards ceremony had given the award to someone else, and it looked like Brody didn’t have a ghost of a chance. But the Academy made a leftfield choice and to the shock of everyone in the venue, Brody's performance was deemed most deserving of the Oscar.

The same can be said for the Best Picture category too. Shakespeare in Love famously defeated Spielberg's epic Saving Private Ryan in 1999, Brokeback Mountain was toppled by the political thriller Crash in 2006, and who could forget the irony in Rocky, the true story of the underdog, beating the likes of All the President's Men, starring Robert Redford and Dustin Hoffman, and Taxi Driver, the latter of which was regarded as Martin Scorsese and Robert De Niro's finest couple of hours together. Many critics were left baffled when Mad Max: Fury Road was nominated ahead of Straight Outta Compton for the 2016 awards, but don't be surprised to see George Miller’s high-octane action film challenging the front-runners Room and The Revenant for the top prize. In 2005, Million Dollar Baby, the unsurprising outsider, beat The Aviator and the biopic Ray to the best film – 95.7% of all other major award ceremonies didn't go for Clint Eastwood's boxing encounter.

The biggest category for a surprise win could be the Best Director award. The way a cinematic experience can be perceived changes from person to person, and awards board to awards board, so the potential for a subjective difference of opinion is high. Alejandro González Iñárritu looks set for back-to-back Best Director Oscars, topping last year's success with Birdman by scooping the prize with The Revenant.

Who would have thought back in 1973 that Francis Ford Coppola would be beaten for his direction of the iconic Godfather film, regarded by many critics and fans as the greatest film of all time, by Bob Fosse and Cabaret? It's worth taking into consideration that the same film has won both the Best Picture and Best Director gongs on 63 of the 87 previous award nights - the odds might seem unlikely, but there certainly is scope for a surprise. 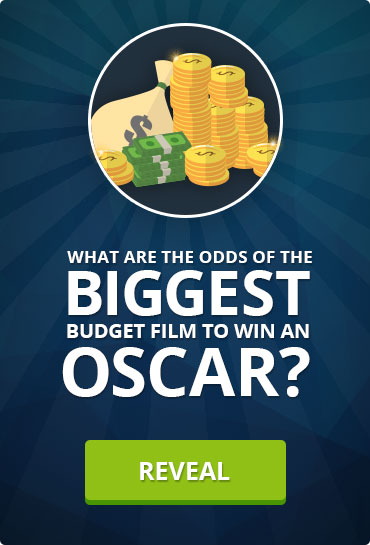 Hollywood is famed for creating big-budget silver screen blockbusters, but does more money mean more success when it comes to the awards season?

Although the films which have large-scale costs involved are designed to draw in bigger audiences and create more of a commercial buzz, the Academy seems keener on showcasing artistic impression and the overall cinematic experience, regardless of how much has been spent.

Avatar currently stands as the biggest-budgeted film to be nominated for the Best Picture award, with costs reaching a whopping £273m. There is no doubting Avatar's quality and ingenuity as a pioneer in 3D films but, despite critical acclaim and resounding box-office succes, the 2010 Oscar instead went to The Hurt Locker – a film that was produced at nearly one-thirtieth of the cost. 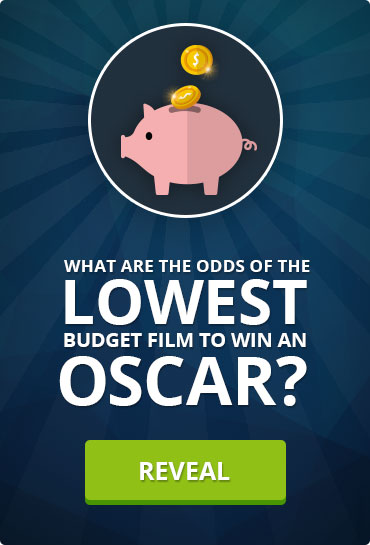 With a budget of £172m, James Cameron's Titanic holds the record for the Best Picture winner with the highest costs. Titanic is quite a rarity: not only did it clean up at awards ceremonies (winning a huge 11 Oscars), but was also a smash with cinema-goers, grossing over £1.4bn at the box office since its release.

Going on estimated costs, the past six winners for Best Picture have had an average budget of just over £13.5m – an average boosted up by Ben Affleck's 2013 thriller Argo, which cost £26.8m to create.

When you look across the previous nominations, however, this average could have been much lower. Winter's Bone in 2011 had a budget of only £1.24m, whereas Beasts of the Southern Wild cost just over £1m to make in 2013, a minimal figure compared to that year's winner Argo.

A familiar sight across most of the major categories, The Revenant stands as the favourite to claim the Best Picture gong this year. But with an estimated budget of £94m, a win would buck the trend of recent years. Surprisingly, however, the film doesn’t have the largest budget in the category - that figure belongs to the Mad Max reboot Fury Road, which cost near to £110m.

The critically acclaimed Room might be one to keep an eye on in this category though. The film is very in keeping with recent Best Picture winners – artistic, a small cast and an even smaller budget (estimated at just £4m). 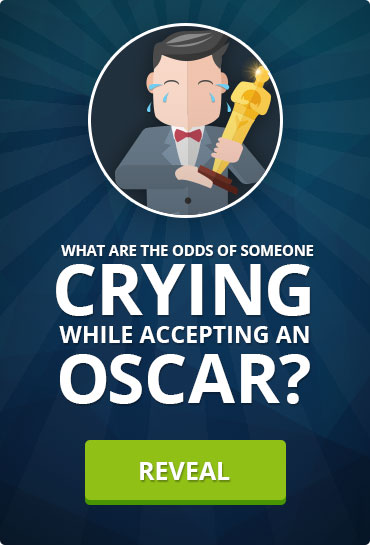 WHO WILL TALK THE TALK?

Winning the award is one thing, but going up in front of your peers and the Academy to accept the award is something else. The Oscars speech has become a momentous occasion – will the accepting artist burst into tears, will they thank their spouse or will they be so unprepared that they haven’t even put a speech together?

To stop the award winners from collecting their prize, then standing on the stage and droning on and on until everyone forgets why they are up there in the first place, the Academy has introduced a 45-second time allocation for an awards speech. And to stop any thank you's from being missed out, the nominees will put together a list of all those they want to show their gratitude to beforehand - and if they win, those names will be projected on stage as they collect the award.

As you'd expect, the most over-used words within any Oscars' acceptance speech, apart from ‘thanks’, are ‘father’, ‘mother’, ‘family’ and ‘God’. Historically, leading actresses tend to say 'thanks' on average 5.8 times during an acceptance speech while their male counterpart shows his appreciation 4.5 times per speech.

The longest Oscars speech to date is Matthew McConaughey when collecting the Best Actor award for Dallas Buyers Club – a huge 574 words. The longest speech by an actress is Halle Berry with 542, although there was a lot of crying involved.

If you're looking to wager against the shortest speech of all-time, the previous efforts might take some beating. Patty Duke only uttered "thank you" for the best supporting actress gong for The Miracle Worker in 1962 while Joe Pesci, despite playing the motor-mouthed Tommy DeVito in Goodfellas, only managed six words when accepting his award.

The Oscars are truly the highlight of the cinematic year, and a chance to celebrate the phenomenal talent the industry has to offer. But just who will come out on top? Well, you'll just have to wait until Sunday to see if the front-runners get the glory, or if any shock winners exit the stage clutching the all-important gong.

Entertainment
About the Author
By
Ketty Fisher