As easy as Three Card Poker is to play, getting the most out of the game requires understanding the odds and learning a simple strategy. In this chapter, you’ll learn the frequency of winning hands, pay tables and odds for Pair Plus, and basic strategy for the ante-play combination.

When you bet on Pair Plus in online casinos or live casinos, you win any time your three cards include a pair, flush, straight, three of a kind or straight flush.

There are 22,100 possible three-card combinations in which card order doesn’t matter.

Here are the numbers of combinations for each hand rank:

Note that flushes occur more often than straights. That’s why in Pair Plus, straights pay more than flushes, as you’ll see below. Some casinos add a mini-royal to the top of the pay table. Mini-royals consist of Ace, King and Queen of the same suit. There are four mini-royals – one for each suit. Paying the mini-royals separately subtracts four combinations from the straight flush total.

In casinos that pay mini-royals separately, the frequency of Pair Plus hands looks like this:

Regardless of whether the casino where you play pays mini-royals separately, winning hands make up 25.6 percent of the total.

You wouldn’t play a game that you won only a quarter of the time if there wasn’t the possibility of the big rewards.

A 40-1 payoff means that if you bet $5 and are dealt a straight flush, you collect $200 in winnings and keep your $5 wager. A 100-1 mini-royal would pay a $5 bettor $500, plus the bettor would keep his wager. The big-paying hands don’t pay as much as those in five-card games, but they occur more often. Five-card royal flushes occur once per 649,740 hands.

Here’s the frequency of paying hands in Pair Plus:

That pay table is rare today, both in live casinos and online casinos. Here’s a sampling of available pay tables and house edges:

If you have a choice, you’d rather have the 5-4 pay table. That’s because flushes occur more often with straights. You gain more with a 4-1 payoff instead of 3-1 on flushes than you would with a 6-1 pay instead of 5-1 on straights.

You don’t have to beat the dealer in Pair Plus, and there’s nothing you can do to change the cards you are dealt.

That means the primary skill in Pair Plus is seeking out the most favorable pay tables.

The ante-play combination is a bet that your hand will beat the dealer’s.

As you’ll remember from Chapter 1, you begin with an ante. After you’ve seen your cards, you may either fold or make a play bet equal to your ante. If you bet and the dealer does not have Queen or better, the dealer does not play. You win a 1-1 payoff on your ante and your bet pushes, regardless of whether your hand beats the dealer. If the dealer has Queen or better, he plays. Then you must beat the dealer to win. If you win, you’re paid 1-1 on both ante and play bet. If you lose, the dealer takes both your ante and bet. Ranking of most hands is the same as in Three Card Poker, with mini-royal and straight flush at the top of the list, followed by three of a kind, straight, flush and pair.

However, for purposes of beating the dealer, hands that do not include a pair or better are ranked first by the highest card in the hand.

If all three cards are the same, the hand is a tie and your bets are returned to you.

Here are some sample hands:

Basic strategy for the ante-play combination is to bet whenever you have Queen-6-4 or better. Fold if your hand is not at least that high. That means you bet on any pair or better – if it’s a winner on the Pair Plus pay table, make the bet in the ante-play combo. If you don’t have a pair or better, make the play bet any time your high card is an Ace or a King, no matter how high your other two cards are.

If your high card is a Jack or lower, fold, no matter how high your other two cards are.

The dividing line comes when you do not have a pair or better and your highest card is a Queen. In that case the decision depends on your second card, and sometimes on your third.

Here are the basic strategy guidelines for making the play bet if you have no pair or better and your high card is a Queen.

Here are a few sample hands near the dividing line: 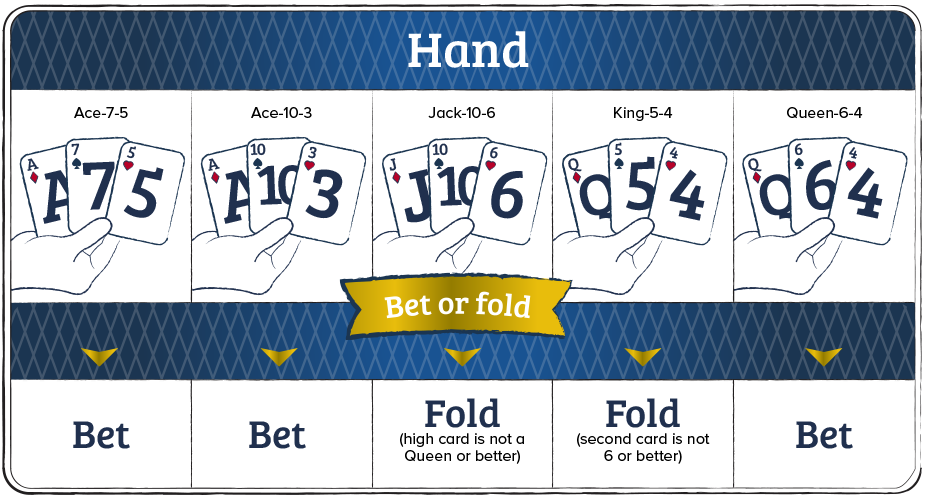 THE ANTE BONUS AND THE HOUSE EDGE

In order to calculate the house edge, one more piece of the game needs to be taken into account. There is an ante bonus paid any time your hand has a straight, three of a kind or straight flush.

The bonuses are paid on your ante, and the play bet does not figure into the bonuses. If you hand is good enough, you win the ante bonus even if you don’t beat the dealer.

The table below includes common pay tables for the ante bonus and the overall house edge for the ante-play combination.

The most common pay table is the best, the 5-4-1 payoffs that were originally designed into the game.

The two house edges tell you different things about the game.

House edge as a percentage of the ante sets a baseline for average losses. If you were always to ante $5 a hand, your losses would average a little less than 17 cents per hand. In 100 hands with $5 antes, if you played the Queen-6-4 basic strategy, you would expect an average loss of $16.85. However, that strategy includes making a play bet equal to your ante about two-thirds of the time. If you start with $5 antes, then in 100 hands you still will average $16.85 in losses, but your ante-play wagering total will be a little more than $840. The 2.01 percent house edge is the percentage of that wagering total that the house expects to keep. That makes the Three Card Poker ante-play combination one of the better casino bets. Blackjack basic strategy players face a house edge of less than 1 percent, and so do craps players who bet the pass-plus-odds combination. The house edge of 1.06 percent on banker and 1.24 percent on player in baccarat also is lower.

Three Card Poker is a game that gives you a reasonable shot to win and the chance at some big payoffs that can lead to a nice winning session.