Cheating: Yes or No? 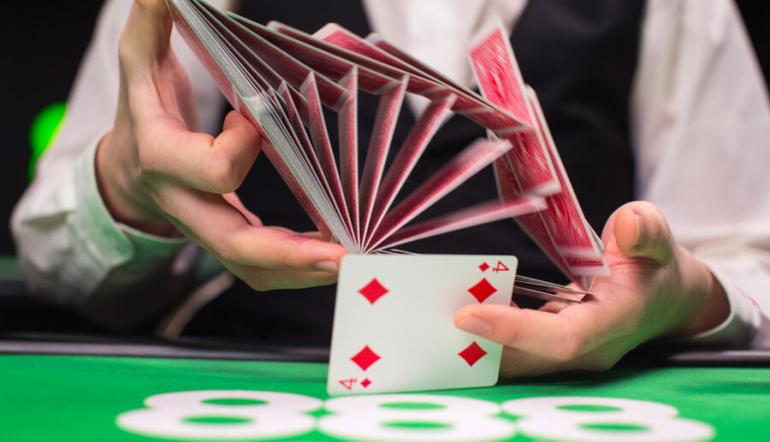 From a reader: You know what I never hear about in almost every gambling article I read? Cheating. I was playing blackjack at a casino, a big one in Vegas, and a guy was increasing and decreasing his bet and a man in a suit told him to flat bet or he’d be asked to leave. What was with that? I occasionally change how much I bet and no one ever says anything to me.

The dealer then jumped in and said that the guy was probably counting cards and that was considered cheating. Well, is it cheating or not? Why didn’t they arrest the guy? Does that mean you can cheat the casino with impunity?

Frank: First off, the player wasn’t cheating. Card counting is not cheating. You are using your brain to follow what cards have been dealt and base your betting and playing decisions on what cards are left to be played.

[Please note: If you take a single-deck game as an example. All four aces come out on the first round. Now, you know there will be no aces on the second round. That is a simple example of card counting. You know what the remaining cards have and what they don’t have.]

Using your brain in a casino has not yet been outlawed. I doubt it will ever be outlawed.

[Please note: Not using your brain in the casinos might be encouraged. Why not? Bad play makes the casino a lot more money than good play.]

Okay, now can the casino tell players to flat bet? Yes. It can. The casino has the right to dictate what a player can bet or how many hands a player can play at once. You might even have a table where players have different minimum and maximum bets. You don’t usually find this, especially in casinos catering to average bettors. But you might find this in high-roller games.

A casino might give the betting limits from $10 to $500 and anyone can bet the minimum or maximum or any amount in between. Almost all of us have seen this type of restriction.

If you bet $5, the floor person might tell you that you must bet at least $10. You haven’t done anything illegal but you aren’t playing the game the way they want you to. You have to bet the $10. It’s that simple.

The same goes for card counting. The casinos do not like it. In fact, they hate it. Why? Easy answer. Some players are good enough at it that they can get a small edge over the house doing it. 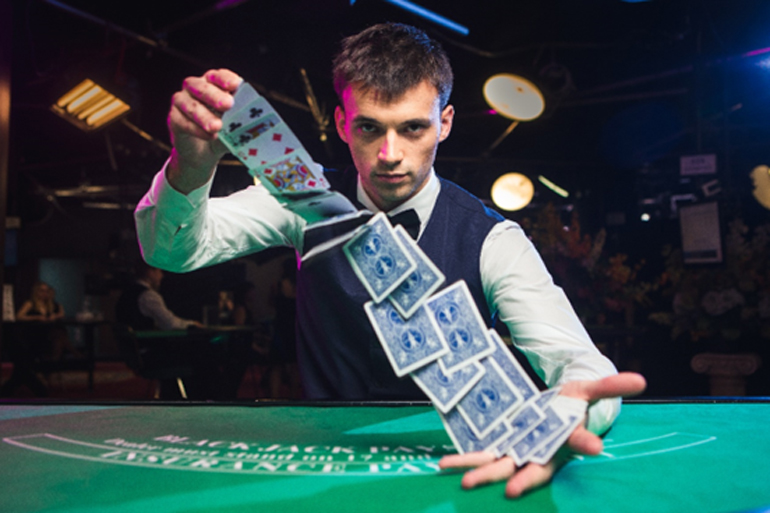 The casino can tell the player to stop playing blackjack and to play the slots or other games.

Now, casino personnel can be pleasant about this: “Sir, you are too good for us at blackjack so you can’t play that any more. But you can play any other game in the casino.”

Or the casino person can be obnoxious about it. “You are banned from playing in this casino. If you come back here you will be arrested for trespassing. We don’t
even want you eating in our restaurants. Now, get out and do not come back here!”

Most states allow the casinos to handle the situation whichever way they choose between these two extremes. One state, New Jersey, does not allow the casino to throw out or ban anyone who counts cards (or gets an edge in any way without actually cheating).

New Jersey casinos can limit the amount wagered by a player (“Sir, you can’t bet more than $100.”) Or they limit the number of hands the player can play. (“Ma’am, you can only play one hand, not two or more.”)

All casinos, and just about all businesses, can ban disruptive or nasty to customers. That should go without saying. I’ve even heard of the “all you can eat” buffets limiting how much a person can actually eat! “Mister Blimp, you are to only eat five meals, then you must go.”

Okay, should you learn to count cards? That’s your choice. Most players who’ve tried it have found it somewhat hard, meaning impossible, to do. Yet, it can be done by some.

I am guessing there are a host of answers to what is real cheating at a casino game. If a card counter were at a table and someone bet with him or her, would that be cheating?

I once had a woman (a small, tight, bony-bodied, sneery-wet-lipped, angry player) bet against me at the traditional baccarat game and when I won a bet, she lost her bet. A few of these and she threw a fit. Her companions had to take her from the game and bring her wherever they brought her.

Thus, betting with or against another player wouldn’t be a sign of cheating. That nutty woman who bet the opposite of me was not cheating and I hope her psychiatrist told her I had nothing to do with whether she won or lost a bet.

Changing the Nature of the Game

I am guessing that changing the nature of the game in some artificial way would be an indication that a player was cheating.

Card counting, as stated, is not cheating but what if a player were to slip a few cards into the game so he gets a blackjack? Certainly, that would be cheating. That might end in an arrest if the player were caught.

What if a dealer paid out wins on losing hands to his or her confederates? Would that be cheating? Obviously. The dealer could be arrested. I’ve seen videos of how some dealers can cheat and those dealers were amazingly good at it. But slow-motion revealed all. Off to jail they went.

What if a player reached over and took a few chips for himself when he thought the dealer was distracted – what about that? Cheating. Call security and then call the police.

What if a player stood next to another player at a craps table and slyly snapped a few chips from the player’s rail, you know, the player playing next to him at the table? The guy who has been drinking a lot? Biffo-bango, take some of the guy’s chips! Theft, plain and simple. That cheater is called a railbird. Or rail bandit. Next, he might be called a jailbird.

What if a craps player is given the dice to shoot and he fixes the pips a certain way and takes great care with his roll. Is that cheating? Bit of a problem here. Some casino people might call this cheating but I am guessing they would have to do this on the very first shot.

From what I have seen this is mostly ignored as every shooter is attempting to beat the casino with his shot. This would not be cheating although some casino folks might harass the shooter. That would be somewhat rare but it could happen.

What about a shooter at craps who let’s fly as if those dice are UFOs going after our military aircraft out in the ocean? The shooter would be told to take it slower and keep the dice in the center of the table. Not cheating. (Casinos do have the right to take the dice away from a slinger such as the above. I’ve seen that happen when drunks consistently throw the dice off the table.)

Let us say that in a Pai Gow Poker game you somehow figured a way to mess with the automatic shuffler which causes you to get a better hand than the dealer. You win your five-card hand and your two-card hand (you make two hands in Pai Gow Poker). You can do this consistently because you know what is about to happen because you fixed the machine. I imagine you’ll be known as the Pai-Gow Joker in jail because that is where you’d wind up.

Roulette has many instances where players have devastated the casinos with monumental wins and this goes back a couple of centuries ago too. Were such wins from cheaters. Not at all.

The ones I know about have nothing to do with cheating. Most have to do with discovering wheels that were biased, meaning certain numbers came up out of all proportion to their probability. A smart player who followed the wheels, and in the “old days” you could follow and indeed find biased wheels. These players then bet the biased numbers. 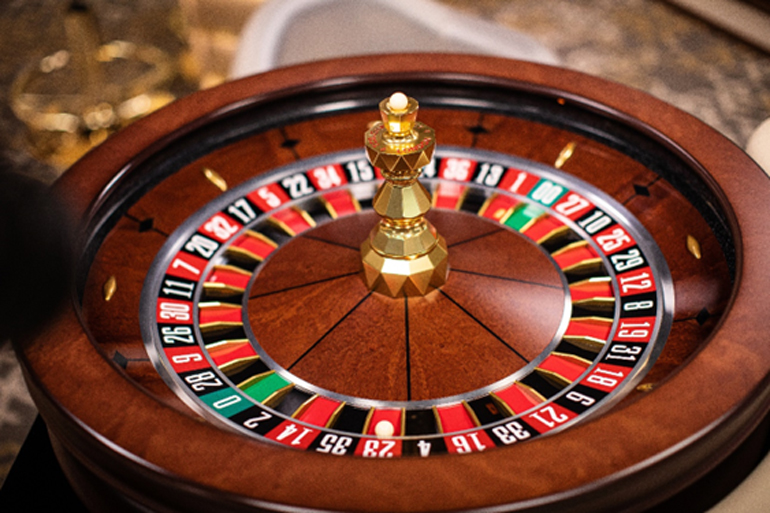 Over 30 years ago my wife, the Beautiful AP, and I found a biased roulette wheel in Las Vegas – this was strictly by luck as we were not interested in playing roulette that particular day at that particular casino.

Yes, we stumbled on this wheel and we played it for all it was worth when finally, the pit boss came over, closed that wheel down and invited everyone to play at a different table.

Everyone? There weren’t too many of us. There were just four of us at this table. My wife and I just played the three biased numbers that hit a lot, a very, very lot, but the other players did not play them at all! They played whatever roulette bets they normally played. They lost during the time we were hammering the house.

Obviously, we didn’t bother to move our game to a regular roulette wheel. Seriously, today’s wheels are rarely if ever biased in any way. I bet if we spent endless hours looking for such machines, we wouldn’t find a one. Remember our good fortune was more than 30 years ago.

There are three other methods that try to beat the game of roulette. One is called the dealer signature which can be a conscious act on the part of a dealer to control the numbers that the ball falls into. The other is the unconscious version of this. I doubt that any dealers can consciously do such a thing on today’s wheels. I’ve never seen this, either the conscious or unconscious variety.

Finally, there is something called “visual wheel tracking” at roulette. You watch the ball spin around the wheel, slip down the side (hopefully missing the buffers) and after bouncing in and out of the pockets for awhile land in a foreseen pocket. You’d also bet a few pockets near the pocket you think might be the charmed one.

One person tried to teach me this method. I found it impossible to learn. WHY? Because it made me dizzy and light-headed and, worse, nauseated beyond belief. I almost gave back my delicious gourmet dinner all over the layout the second time I attempted visual wheel tracking.

Does it work? Beats me. But if it did, it would not be cheating because the player did not change the nature of the game.

All the best in and out of the casinos.