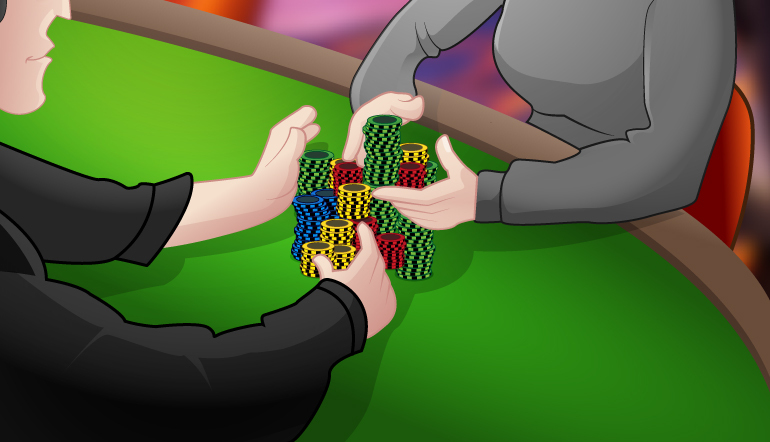 Everyone is entitled to get lucky sometimes. But there are those who seem to get way luckier, way more often, than the rest of us. While it often takes varying degrees of skill and timing to land a major casino win, you can’t discount the role that good fortune plays in all of it. Here, then, are five big casino victors who stumbled across the magical combination for taking down life-changing windfalls.

Elmer Sherwin was notorious for gambling higher than anyone else in the world. Never mind that the late press baron was a billionaire, he risked sums that even the super-wealthy would be too chicken to put on the line.

While he of course endured his share of outsized ups and downs, there was one mammoth victory against the casino that had to compensate for a lot of negative swings. While gambling at the MGM Grand in 1997, Packer must have felt especially lucky because he was playing six spots at the blackjack table with $200,000 on each betting circle. When the smoke cleared and his chips were counted, Packer was ahead by an estimated $20 million to $40 million.

The Sydney Morning Herald put his win at $26 millon and pointed out that he was not the only beneficiary that night: By session’s end, he tipped his cocktail waitress enough to pay off her mortgage.

Back in 1989, some nine hours after the Mirage opened its doors, Las Vegas resident Elmer Sherwin made headlines by hitting a $4.6 million Megabucks progressive slot machine bonanza.

But, if not for the former Mrs. Sherwin, the score might never have happened. Sherwin had already gone through $80 of his own money and borrowed $20 from ex-wife Florence (she told the New York Times that they were “still buddies” despite marital acrimony) and went on to hit his jackpot. When a reporter asked if he would remarry her, Shewin quipped, “She won’t have me.” His win, at the time, was the largest single payout in Las Vegas history. Clearly a good guy, he donated a chunk of his prize-money to victims of Hurricane Katrina.

For most gamblers, that big win would have been enough. Not for Sherwin. Sixteen years later, in 2005, he was back in action, playing the Megabucks machine at Cannery Casino. He boasted about wanting to hit a second windfall. Nobody took him seriously – until, against all odds, he did it again. That time, he took down a payoff in excess of $21 million. He made another donation to Hurricane Katrina survivors and offered a challenge to the gambling gods: “I’m gonna try for a third win on Megabucks.” Unfortunately, he died in 2007, and never made the hat-trick, but nobody can say that he did not get the most out of life and out of the casinos.

THE DON OF GAMBLING

By the time Don Johnson began attacking the blackjack tables of Atlantic City, he was already a savvy, successful, sophisticated gambler. But he made his money by using computer simulations to beat horse racing.

On the side, Johnson engaged in moderate advantage playing at blackjack and capitalized mightily on comps. But when he heard about desperate Atlantic City casinos offering good rules and generous discounts on loss, he decided to step up in a big way. He played with a crew of associates who card counted, hole carded and ace sequenced. Plus there were people there to eat bad cards when the count got low. It allowed Johnson to keep from varying his bets – a dead giveaway that one is card counting – while maintaining the advantage that card-counting brings.

He would eventually extract  some $14 million out of Atlantic City casino coffers. “But,” Johnson told me, “beating Caesars out of $4.23 million in one stretch kicked things off.” Johnson funded his run with a $220,000 check from Taj Mahal (he won that money in 12 or so hours, betting anywhere from $500 to $10,000 per hand) and the Caesars victory happened over the course of a long weeknight session, “It ended for me with a Caesars shift manager waving his hands,” Johnson continued. “Nobody said anything verbally. I racked up my chips, two security guards followed me and I got paid. Then I went up to my room and slept for a couple hours. I was pretty tired.”

Normally, I am not incredibly into watching sports. But, in Las Vegas, with, say $100 wagered on the outcome of a game (not enough to hurt if I lose but enough to mean something one way or the other and get me rooting for my desired side), it’s a hell of a lot of fun – especially with a good burger in a kitted-out sportsbook. Maybe a 25-year-old software engineer from California was thinking the same thing  in 2003 when he rumbled into town to watch an NCAA Finals basketball game.

Presumably killing time before tip-off, he put $100 or so into a progressive Megabucks machine at the Excalibur. Amazingly, his spin hit. He won $39.7 million, signed all the required documents and immediately asked that his name not be released. No doubt, the excitement of March Madness paled alongside this life-changing score. And just to make sure that his millions would not all get spent in one place, the engineer asked that his money be paid out in 25 installments of $1.5-million each.

Archie Karas’s casino winning streak is so iconic that it is know simply as “the run.” As goes his story – some of which can easily be apocryphal – but who cares when a tale is as good as the one about Archie – Karas came to America with $50 in his pocket. He made his way to Los Angeles, ran it up to $2 million via pool hustling and sharp playing in the city’s underground poker games. Then he blew it all before materializing in Las Vegas, in 1992, with nothing more to his name than a borrowed $10,000.

He went back to poker and pool and supposedly took on all comers. Even the great poker-genius Stu Ungar got spanked by Karas. Supposedly, Ungar lost $1 million to the high-flying Greek. Reports have it that over the course of six months, he ran his bankroll up to $17 million, By 1995, it is said to have reached $40 million. Then, supposedly, over the course of two disastrous years, he blew it all at craps, baccarat and even his old standby game of poker.

During the next 18 years, Karas found himself in and out of money and was a frequent fixture at the World Series of Poker. But, clearly, things were not going well for the once flush gambler. In 2013, he was arrested for marking cards at the blackjack table of a San Diego casino. No stranger to accusations of shady behavior, Karas had been arrested four times previously, under suspicions of cheating. This last time, though, he received three years probation and permanent placement in Nevada’s notorious Black Book. It prohibits him from entering any of the state’s casinos and taking a final shot at acquiring one more life-changing fortune.

Don Johnson
About the Author
By
Michael Kaplan