Ed Thorp: “Blackjack was Fascinating. Then it Became Work" 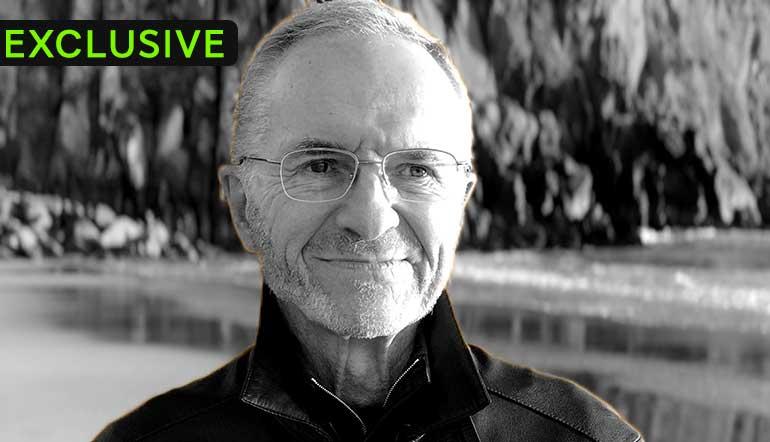 People say that Dr. Edward O. Thorp wrote the book on blackjack, and it is no exaggeration. Back in 1962, when nearly everybody thought that blackjack was a game of luck, the university professor used computers to devise a system for uncovering mathematical advantages at the table. Appropriately titled Beat the Dealer, Thorp’s bestseller laid out a card counting system that remains in use today – and is  still used for winning, much to the chagrin of casino bosses.

Along the way, Thorp built up a considerable library of resource books that address everything from casino games to horse racing. Having recently become enamored with the Blackjack Ball – an invite-only, secret gathering of advantage players, held annually in Las Vegas and sponsored by Barona Resort and Casino – Thorp graciously donated his gambling library to the Ball’s founder Max Rubin. In order to raise money for future Balls, Rubin plans on slowly auctioning off the contents from Thorp’s reading room.

At the most recent Blackjack Ball, held this past February, five of the precious titles went to the highest bidders. “Some of the books have candid comments that I made for myself,” says Thorp, who surely had something to write in the margins of The Weekend Gambler’s Handbook, by Major Arteburn Riddle, owner of the Dunes who was more interested in beating suckers than in educating them. “I once met with Major Riddle in Chicago and he wanted to do a blackjack freeze-out with me versus his casino.” 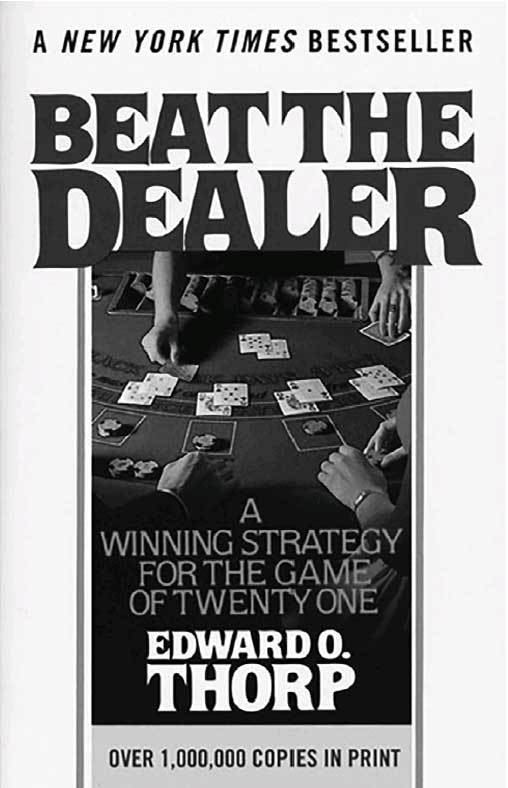 Remembering that they convened in a hotel room and that Riddle was bereft of pants and “wearing boxer shorts that were not particularly closed,” Thorp says that the challenge initially seemed like it could be a good spot for him. “I said I would do it but I have conditions,” Thorp continues. “I said that the dealer would need to wear short sleeves [to minimize opportunities for him to cheat]. Riddle said no to that. I also wanted to videotape the action so that I could detect cheating activity that you can’t spot in the moment. He said no to that as well. Then he wanted me to play for 30 days, to sit around for a month while I tried to win $100,000. It wasn’t worth it for me.”

Just that decision alone gives an idea as to how much Thorp was able to extract from the casinos. Always an independent thinker, he devised his card-counting system over the course of a summer by using room-sized computers at Massachusetts Institute of Technology.  By the time his technique was perfected, Thorp was broke. So he found a pair of backers and put his card counting system into action. “We won $11,000 on the first trip,” Thorp remembers. “Over [the course of] three years I won a quarter of a million dollars but it was shared [between Thorp and his backers].”

Despite the financial upside, Thorp had a bigger idea in mind. Without telling anyone, he secretly worked on the book that would become Beat The Dealer. Then he encountered a salesman from a subsidiary of the major publishing firm Random House. “He heard about what I was doing with card counting and said that I ought to write a book,” continues Thorp. “I handed him 10 chapter-headings  and the book was bought immediately. I wrote it in six months and thought up the title, Beat The Dealer. The book came out and nothing much happened with it in terms of sales.”

Then publicity was generated through articles about Thorp in Sports Illustrated and Life magazine. “At that point, it got kicked onto the bestseller list,” Thorp says, adding that he stopped gambling soon after. “I could have made more money playing blackjack [than writing a book about it]. But I didn’t want that life. My goal was to be an academic who talked to smart people and enjoyed himself. The grind was something that I had no interest in.” 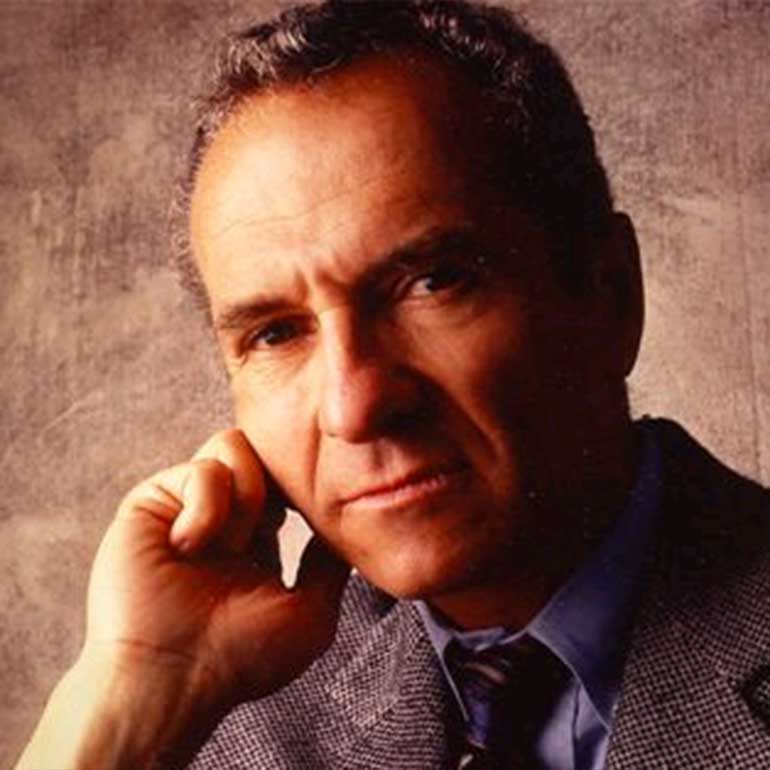 But he has plenty of well-worn books on the topic. Other titles that hit the Blackjack Ball auction-block included an influential, seminal, blackjack tome called Turning the Tables on Las Vegas by the pseudonymous Ian Anderson. It had been signed to Thorp. At the spectrum’s opposite end: the questionable playing live blackjack as a Business by Lawrence Revere. It generated sharp rebukes from the card counting master. “Revere says that you can get a 3.5 percent advantage by not moving your bet,” says Rubin, revealing advice that is patently untrue. “On the page, Ed wrote, ‘Baloney!’ He added ditto, wherever Revere made similar claims.”

Anyone who questions Thorp’s authority on such matters only needs to hear him recall the way that losing casinos pushed back at him as soon as it became clear that he could play games with unassailable advantages. “At one casino, they kept trying to bring me liquor and I asked for coffee with cream and sugar,” says  Thorp. After finally getting what he wanted, Thorp  drank the coffee “and all of a sudden I couldn’t count anymore. My pupils were huge. The next night, they brought me a glass of water. I put a drop on my tongue and, again, I could not count. If I drank the entire glass, you would not be talking to me right now.” Casino managers were so desperate to get rid of Thorp and his winning strategies that they resorted to drugging him.

Thorp’s playing days are long behind him – as chronicled in his fantastic memoir, A Man for All Markets, he’s successfully beaten the world’s biggest casino, Wall Street, by expanding on gaming theories and applying them to the more lucrative trading of securities – but he  looks forward to attending the Blackjack Ball each year. As is appropriate, Thorp gets fawned over like a rock star, but the appeal of the Ball goes far beyond an ego boost. “I go there to interact with very interesting people from inside the gambling world,” says Thorp. “One thing I like is being able to see that the seed I planted with Beat the Dealer has helped a lot of people to get wealthy and have rewarding careers. I did not expect that to happen.” 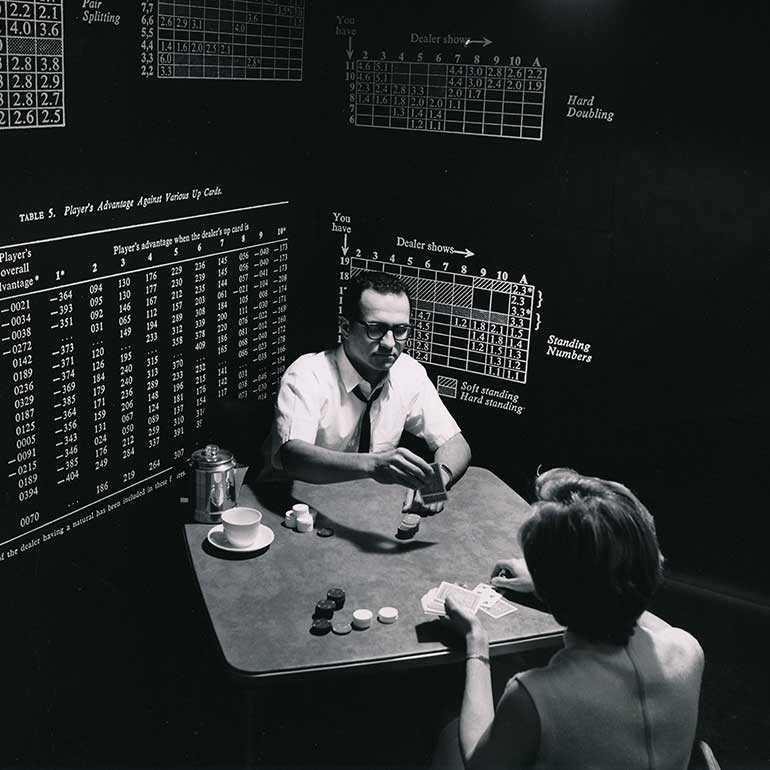 While he enjoys being brought up to speed on the state of the game – “There was talk of a side bet in an East Coast casino that players took advantage of; they won a few million dollars;  hearing about that was a highlight” – on at least one recent occasion, during Blackjack Ball weekend, Thorp’s relationship with casino gambling went beyond the talking stage. It happened after he met MIT blackjack team pioneer John Chang and a couple others for lunch in a Strip casino.

They wanted to a take a photo alongside a blackjack table but an employee told the group that photos are not allowed. “So we wound up playing a little bit,” Thorp says, remembering that it was his first time in action for decades (Chang was tickled by the experience). “I had no cash with me, John loaned me a little bit to play with and we wound up winning $3,000 or $4,000. Then we stepped out of the pit and took a picture anyway. The casino could have saved itself some money.”

Fortunately for gaming executives, there is no chance of Thorp getting serious about blackjack again and committing himself to hauling serious cash from their coffers. “When I first started playing, it was fascinating,” he explains. “Then it became work and it turned into a grind. At that point, I moved on and now casino gambling is too small scale. I’d have to work hard to make a few-million a year. It’s not worth my time.”

Edward Thorp
About the Author
By
Michael Kaplan