A Guide to Four Card Poker 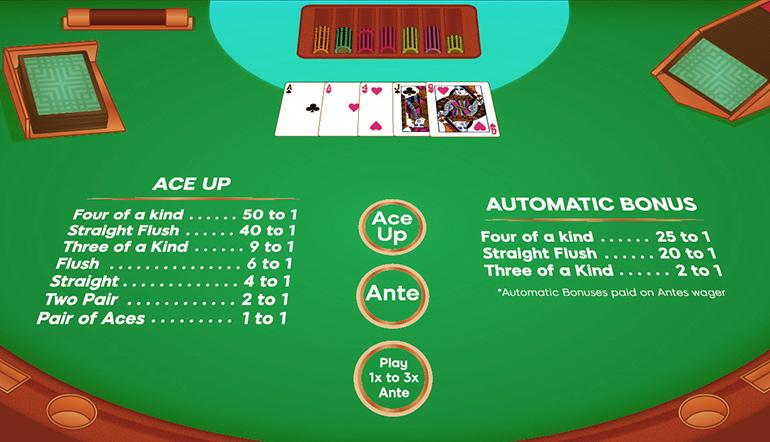 Devised early in the 2000s by Roger Snow at Shufflemaster – now part of Scientific Games – Four Card Poker sometimes pops up in large live casinos, but of late is finding a new niche in online casinos. That's a strength of online play: physical space isn't a constraint, so online operators can offer more varied games.

Four Card Poker has an ante-play option and an Aces Up option. That's similar to Three Card Poker's ante-play and Pair Plus options.

A key difference is that in the ante-play section, dealers don't have to make a qualifying hand for play bets to be active. In Three Card Poker and many poker-based games, the house edge comes from the qualifying hand stipulation that leads to only partial payoffs on many winning player hands.

So how does the house get an edge? By dealing more than four cards. Players each get five cards and the dealer gets six. From those cards, everyone makes their best four-card hand.

That gives the dealer more chances to make a better hand. On the average, the dealer hand will be higher than the player's, giving the house its edge.

Let's look at gameplay and strategies, first for ante-play, then for Aces Up.

Rankings of hands are slightly different from most poker games. The top hand is four of a kind, outranking straight flushes, including royals.

After four of a kind, hand ranks in order are straight flush, three of a kind, flush, straight, two pair, pair, and unpaired high card. Note that three of a kind outranks flushes and straights, and there are no full houses in four-card hands.

To start a hand, you must place an ante.  At the same time, you may make an Ace Up bet, but that is not mandatory. 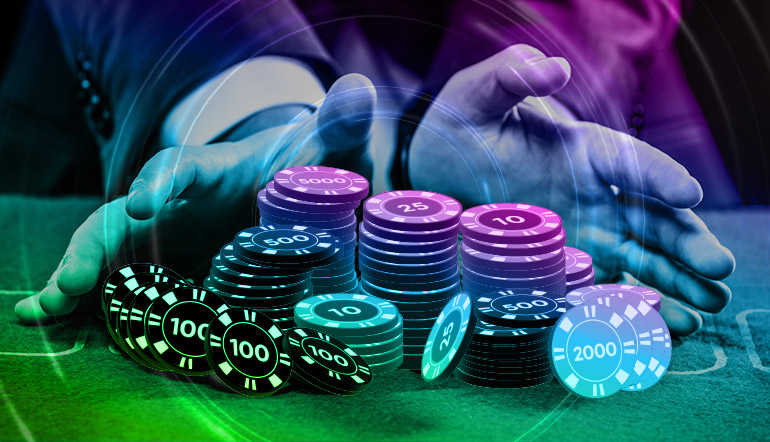 You're then dealt five cards and the dealer gets one card face up and five face down. Cards are dealt from a single deck, with a fresh shuffle for every hand.

After you look at your cards, you must decide whether to fold or raise. When raising, you must bet at least as much as your ante, but may bet up to three times the ante.

If you fold, you lose and the dealer collects your ante. If you raise, you must discard one hand and make a four-card poker hand.

After your discard is made, the dealer turns his cards up and discards two to make a four-card hand.

The player winning on ties instead of pushing is a nice bonus.

In addition to the wins for beating or tying the dealer, there is an ante-bonus on high-ranking hands. Regardless of whether you beat the dealer, you get a bonus on three of a kind or better.

Four Card Poker strategy involves  when to fold, when to raise and how much to raise.

The beginner strategy, originally devised by esteemed games analyst Stanley Ko, is easy. Anyone playing Four Card Poker for a change of pace should be able to master it quickly.

It calls for a 3X raise if you have a pair of 10s or better, or a 1X raise with pairs of 2s through 9s. Fold all hands of less than a pair. Advanced strategy is more detailed with more ifs and here key concepts to remember:

That's involved enough that few casual players are going to take the time to memorize for play in live casinos. For online play, you can keep a strategy sheet at your side until you get used to the plays.

The other wager in Four Card Poker is easy. You don't have to beat the dealer and there are no strategies to learn.

In Aces Up, you win any time you have a pair of Aces or better. That makes it just like Three Card Poker's Pair Plus, except that pairs lower than Aces don't win.

You'll win on only about 19% of hands, but the payoffs are large enough that the house edge is 3.89%. By comparison, the house edge on the most common version of Three Card Poker's Pairs Plus is 7.28%.