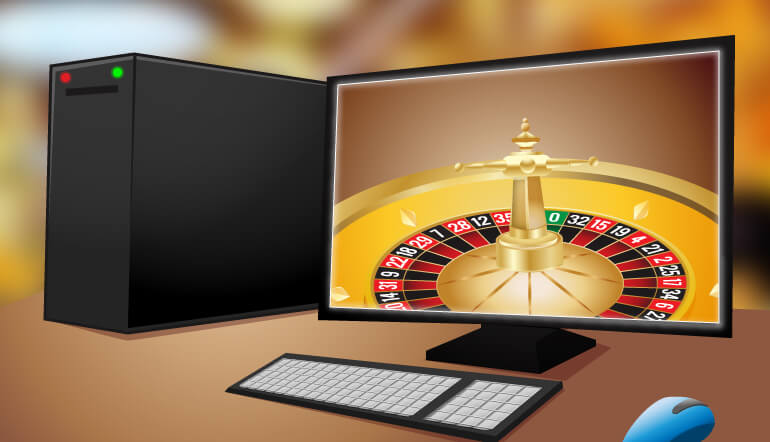 Today you will meet Roulette Ralph, a part time amateur mathematician, a full time roulette fan and a man who has given the ins-and-outs of gambling a serious consideration in his over 30 years of playing in casinos.

Roulette Ralph enjoys coming up with methods of play that can keep the house edge at bay but that also give players the charge or thrill they desire. After all, players play for just such charges and thrills. If they didn’t get those I am guessing players wouldn’t play.

I enjoy reading Roulette Ralph’s insights and while I don’t always agree with him, I think what he has to say about roulette has great meaning for players. The bottom line for players is that they pick and choose how they are going to play. Some players follow strict methods and some players just throw caution to the wind and play helter-skelter. In the end it is the player’s choice.

Frank: How did you get the name Roulette Ralph?

R. Ralph: I wish I could say that my fan club, if I had a fan club, or my wife gave it to me but that didn’t happen. I gave the name to myself. What the heck, I play the game, I love the game and it is a part of my gaming essence. I guess you could use the word “essence” to describe me in relation to the game. Roulette is many centuries old and it has a long pedigree. I like that because in some ways I am a part of history when I play the game.

Frank: Now today you want to take a look at a way to play. What’s is it?

Frank: That’s one of the most dangerous ways to play any casino game isn’t it? It gives the player small wins and a tremendous loss that destroys those small wins. It looks like a good system but it isn’t. Unless you have figured out a way to play it that doesn’t clobber you every so often.

R. Ralph: There won’t be any clobbering. As everyone knows, or most everyone knows, the Martingale usually calls for the doubling of one’s bet every time they lose a decision.

The increases will stop when you hit the house limit on the amount you can bet on any one decision. That can be seven or eight wagers.

Frank: That happened to me at the old Sands in Atlantic City. I had a couple of days of those small wins and then the clobbering happened. It was a wakeup call to me to forget that system.

R. Ralph: As it should be. You don’t want to have that kind of risk with a hugely bloated bet. Now my method will forgo the escalation to the higher levels of the Martingale but will allow a string of decisions for the player to play. But, and this is a key, it will also cost less money overall than even playing a normal amount per decision. The total of my Martingale is a slim system.

Frank: I never heard the term a “slim system.” What do you mean by that?

R. Ralph: It means you are paring down what you would bet as a total sum on your method of roulette play.

Frank: Okay, lay it out for us.

R. Ralph: Follow this exactly as I describe it. You cash in at the table, getting your special roulette chips. You will only bet those even-money bets as I mentioned. Let’s make the chips worth $10 each. Try not to look at the scoreboard while you are cashing in.

Once you have your chips, your game begins. Look at the scoreboard from this point now on.From this point, you want to see if any of the even-money bets hit three times in a row. You will hop on whichever it is that has hit. Or you would bet against whichever has hit. You are only going to bet one even-money proposition. If, let us say, a particular color comes up and also a “high” number three times in succession, you choose which one of the two you will bet. You do not bet both.

Except you actually have not bet anything at all. You are merely using the three hits to determine what to bet from here on in. An appearance of a 0 or a 00 ends the streak and you must start over. You have not lost a cent!

Now, chances are you might not get three hits in a row of any of the even-money bets, so you just wait. Keep this in mind please; even without betting you are still playing the game. You are in the action emotionally just by waiting for the event to happen. As obvious as this is to say, the casino has no edge on no bet wagered.

Okay, now you decide to bet either with or against the “red” even-money proposition after its three appearances in a row. Let us say you decide to bet against it by betting “black.” You put your $10 on “black.”

Frank: Get us out of the predicament concerning the fact that you also lost $70 on your streak up to this moment.

Frank: So what do you do at this point? Do you just keep going?

R. Ralph: No, you are finished for that sequence. You must wait for another sequence of three even-money appearances in a row to start once again. You don’t even look at the scoreboard for the next spin or you go to another table or you just grin and bear it if the streak ends with a “black” right after you took your pause. You are looking to play but at the same time you are also looking to protect your bankroll.

Frank: Do you have a money-management strategy? You aren’t going to just keep playing and playing right?

R. Ralph: If a player just keeps playing they are asking for trouble. The casino edge is always grinding away.

Frank: So money management for this method?

R. Ralph: The most you can lose on any one sequence is $70. If you were playing the regular Martingale the loss would be $630 so that becomes our maximum amount we use to play with – no more. But you can bet less than that if you want. You would have to lose nine sequences in a row to lose $630 – and chances are that is a real longshot.

Frank: That could happen though?

R. Ralph: Oh, yes. It means you would lose 27 decisions in a row. That would be an amazingly bad streak and I doubt that would happen to a roulette player. But it could. Randomness can do some pretty amazing things but losing 27 decisions in a row, well, that would be somewhat farfetched. I wouldn’t discount it on a universal level but I would never bet on it happening in my play.

You can, of course, decide that you will only play a few sequences and that might mean you lose those few. But remember you only need one hit in any sequence to at least feel you are in the game.

Frank: Now some casinos will give you back half your bet if the 0 or 00 hits on an even-money wager. In the double-zero game, also called the American game, that is named “surrender” and in the single-zero or European or French game that is called “en prison.” This will reduce the house edge in half on those even-money bets. The single-zero game has a house edge of just 2.7 percent and that can be reduced to 1.35 percent if it has en prison. That is one of the best bets in the casino. On the American double-zero game the house edge is reduced to 2.63 percent.

R. Ralph: That’s true. It is always best to play at casinos that offer these types of rewards – I guess you’d call them “rewards” because reducing the house edge is always the best thing that can happen to a player. So rewards it is!

However, even with these if you lose one of the bets in your sequence that sequence is finished. Playing this way will require discipline as the tendency of players is to get fully caught up in the game and sometimes to get so excited they don’t think of the consequences to their money.

Frank: Do you think reckless play is a problem at roulette?

R. Ralph: Absolutely. I think what happens, especially at crowded tables, the waiting to place the bets as the dealers clear the table of the losing bets and paying the winners, leads some players to think, “Oh, maybe I should make some more bets.” It almost becomes automatic. So you have to play just the way I say and do not add any more to the method.

Frank: Are there other types of Martingales that you might discuss, maybe in future columns?

R. Ralph: Yes. But everything I will discuss is discussed with the idea of not costing you too much money to the house edge.

Frank: And what about comps? Are you into getting comps from the casinos? Many players are interested in comps.

R. Ralph: Yes, some players are too much into comps. I am not opposed to getting comps. Why not get them? If the casino wants to give you a free or discounted room and a meal or two or three, that is just fine with me. But I won’t play for comps. They do not motivate me at all. They are just a part of the playing routine of the casinos. They aren’t why I play. I stick to my methods and whatever comps come my way I will gladly take them and thank the casino for giving them to me. But I never play for them.

Frank: Thank you Roulette Ralph. And to my readers: All the best in and out of the casinos!