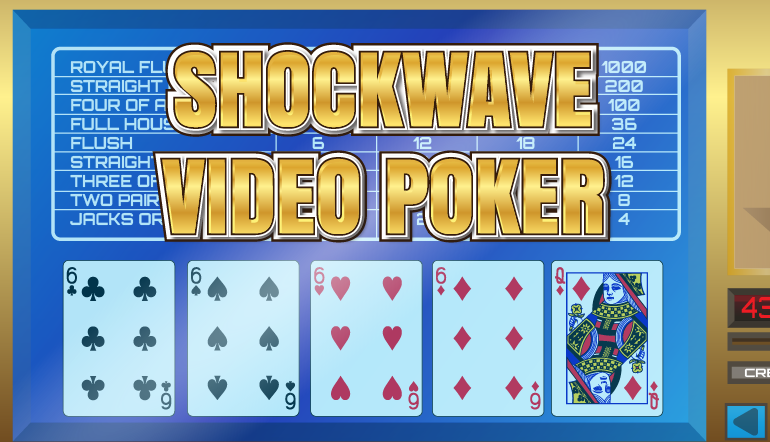 Shockwave Video Poker is a unique style of Jacks or Better video poker. There are two different modes of play – normal and Shockwave. The normal mode is exactly what it sounds like – normal Jacks or Better play. It accounts for well over 90 percent of play. The game operates in normal mode until a four-of-a-kind hit. It then enters “Shockwave” mode for ten plays or until another four-of-a-kind occurs, whichever happens first. And here is where it gets exciting. In Shockwave mode a four-of-a-kind pays the same as a royal flush. The complete paytable information for the 12/8/5 full-pay version is below. There are three different paytables; one for normal mode, one for Shockwave mode and a combined pay table.

Notice the very high return and astronomical variance for shockwave mode. However, the game is only in Shockwave mode for about 9.8 plays once every 435 hands, so the impact on the combined paytable is minor.

Some of the major differences between Shockwave and standard Jacks or Better are:

When playing Shockwave, the two most noticeable changes from standard Jacks or Better are:

Several different short-pay versions are available. Due to the return percentages, there are only two of them that I recommend while playing video poker:

The video poker strategy is identical for either the full-pay (12/8/5) or the short-pay (11/8/5) versions of the game. The simplified Normal mode strategy follows.

While that is quite a complex strategy, the strategy for Shockwave mode is simpler.

The relatively low variance for the combined mode and the relatively high returns for the full-pay version make Shockwave a decent game to play – if you can handle switching strategy during the Shockwave mode. Keep in mind, however, that most of the time you are playing in standard mode which has a house edge of 4.76 percent. Also, you will hit a four-of-a-kind in Shockwave mode only once in every 40-45 times you play it. Your video poker bankroll will be drawn down more quickly. So, if you want to play Shockwave Poker, make sure you have the bankroll and can handle the emotional aspect of losing fairly quickly until you hit those quads in Shockwave mode.

If so, you should enjoy the game since Shockwave video poker adds the excitement of another jackpot-sized winner to the mix without the normal high variance.

Shockwave
Video Poker Tips
About the Author
By
Jerry Stich