Video poker games have become a large portion of today’s casino landscape. There are dozens of different games. Each of these has multiple pay tables. How can you best take advantage of what the casino is offering? Here are several tips that will help you get the most from your live casino & online casino video poker play. By following these tips, you will be well on your way to enjoying success in your video poker play. 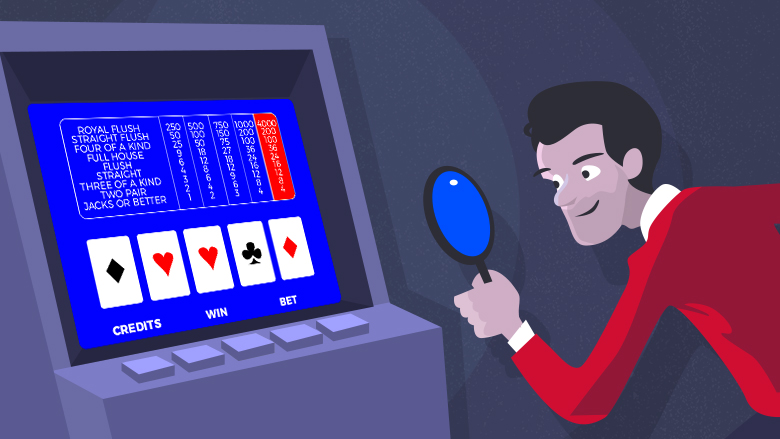 This is the most important tip of all. With all the differences in video poker games, you must be very observant. Nothing is sacred in a video poker pay table. Make sure when you are looking for a game to play that you look carefully at the game, the pay table, and the number of credits required. Countless times I have seen players sit at a machine with a miserable return when right next to that game is another with a much better return. It may take some time to learn what to look for in your game of choice, but once you know the type of game you want to play, learn the returns for the most common pay tables and make sure you are playing the game you think you are. 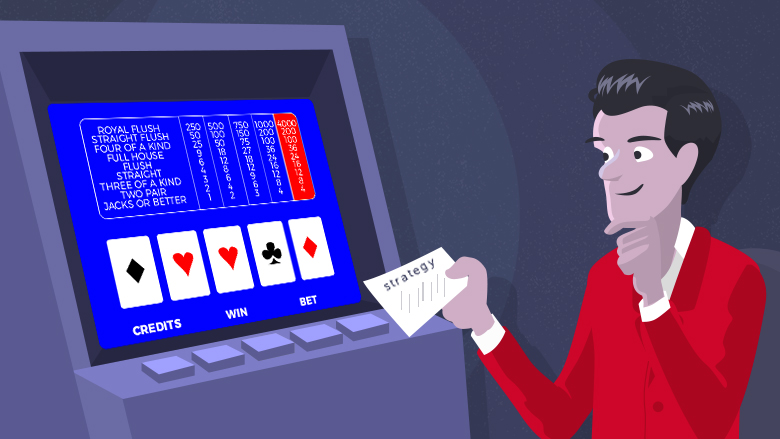 Playing video poker is different than playing online slots. The video poker player has a say in what happens. Sure, the cards are dealt randomly, but what the player decides to do with the initial five cards that are dealt will make a difference in the overall success (profit or loss). For this reason, any serious or even mildly serious video poker player should know the playing strategy for the specific game he or she is playing.

Each different type of video poker game has its own unique strategy. In fact, each different pay table for the same game has a unique playing strategy. The strategies may be very close to each other, but the strategy for each combination of game and pay table will be different.

By spending this time up front you will be in the best position to maximize your live casino or online casino video poker play. 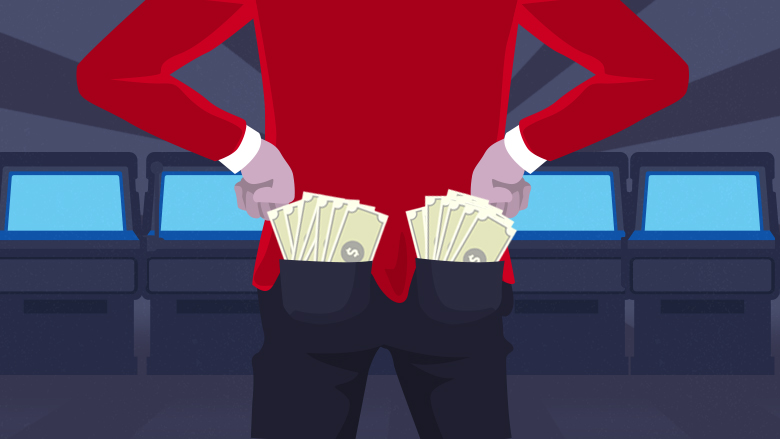 As with any casino game, the video poker player wants to play for a while. In order to do that he or she must make sure the denomination of the game they are playing is low enough to allow for a decent amount of play time. If you have $100 to play and you would like to play for at least an hour or two, a dollar denomination game is definitely not for you. It is entirely possible that you will be all out of money in as little as five minutes. A much better choice would be a 25 cent game that would allow you about an hour’s worth of play – or more. If you have $500 or more and you want to play for an hour or two, you could choose a dollar game, but here too, the lower the denomination, the longer you will be able to play.

Also, and this is important, your bankroll is not your checking account, savings account or anything else that is needed to support your day to day living. It is most certainly NOT an ATM machine!

Your bankroll must be money specifically set aside for gambling. It must be money that will not be missed when it comes to paying for everyday expenses. Since the casino has an edge in virtually every game it offers, you must be ready to lose everything you out at risk. To properly do that, what you put at risk must be money you can afford to lose. This is the second best tip in this article. Follow this tip and others pale in importance. 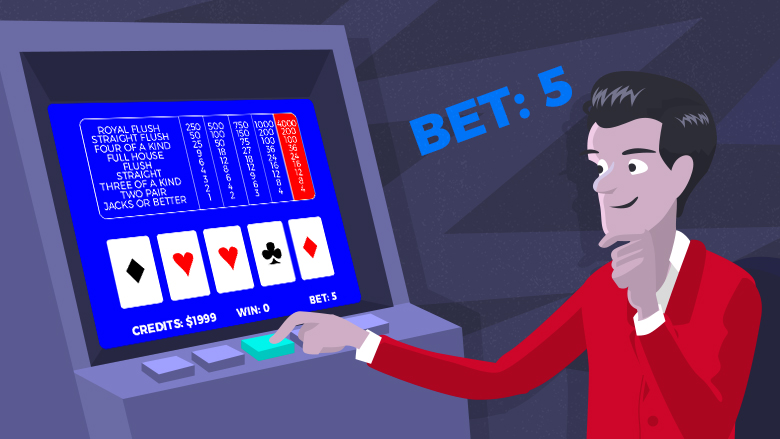 Standard slot machines allow one or more credits to be played on every spin. Most of them pay the same ratio regardless of the number of credits played. For example if you get three 7’s, you may get 100 times the number of credits bet: 100 for one credit, 200 for two credits and 300 for three credits. Video poker is different. The top paying hand – a royal flush – pays 250 for 1 if you bet one through four credits. However, if you bet five credits, it pays 800 for 1 (4,000 for five credits). When playing video poker, always play five credits. You are just giving the casino too much by playing fewer than that. Some games require 10 or even up to 20 credits in order to pay the higher return for a royal flush. If that is the case, make sure you bet the required amount to get the higher pay. If this is more than you can afford, (either financially or emotionally) switch to a lower denomination, if possible. 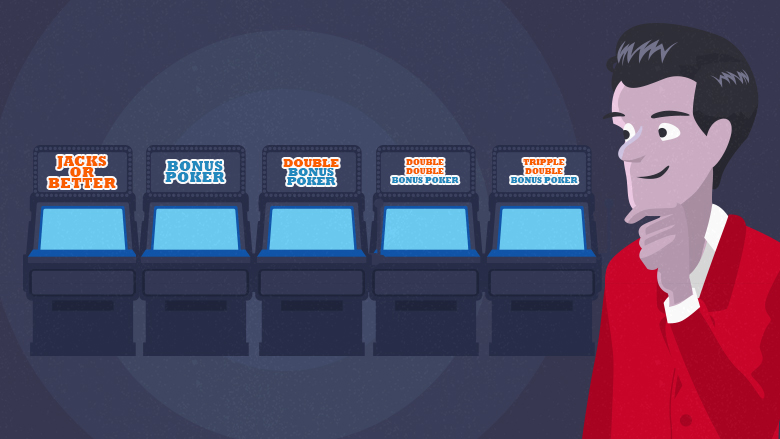 In order to offer some insight into the best video poker game for you, we need to look at the different major game types. One of the first video poker games to gain acceptance was called Draw Poker. The minimum hand that paid anything was a pair of jacks or better. Several variations of jacks or better have appeared since then. They have names such as Bonus Poker, Double Bonus Poker, Double-Double Bonus Poker, and Triple Bonus Poker. All of these games have similar pay tables. The “bonus,” “double” and “triple” refer to pays for specific four of a kind hands.

The most popular types of wild card video poker games are Deuces Wild and Jokers Wild. In the Deuces Wild game all 2’s (deuces) are wild and can substitute for any card. This game has four wild cards so there are a lot more high hands produced. The top paying hand is a natural (without 2’s) royal flush. The second highest hand is four deuces. The Jokers Wild game only has the joker as a wild card so the frequency of higher paying hands is less.

The thing to keep in mind between these two major groups is the wild card games will play much differently than the jacks or better based games.

Any video poker game can be single play (only one game played at a time) or multiple play (three, five, 10, 50, or 100) games. In a multiple play game, the same initial hand is dealt to each of the multiple play lines. The player holds cards on the first line. The same cards are held on all the rest of the lines and are filled randomly. If the player gets a good first hand, each of the other lines has a high potential to pay off. If the initial hand is a dud, so will be the end results of the remaining hands. 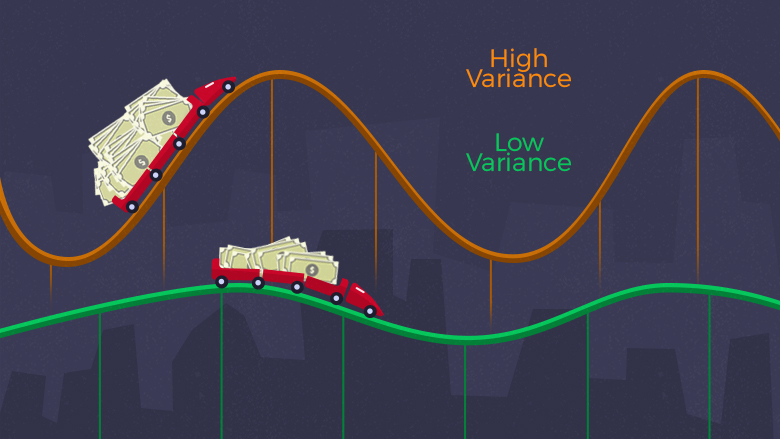 When looking for the best game to play a primary factor is the game’s return. The return is how much money gets “returned.” For example, a video poker game that returns 99 percent will return 99 dollars of every 100 dollars played through the game. This does not happen every time 100 dollars is played. The player may only get 50 dollars one time and 148 dollars the next ($198 for $200 played through). The results will be all over the place, but over time, the average return will approach 99 percent.

Video poker returns tend to run from a truly miserable 95 percent to over 100 percent in rare cases. To get the most from video poker play, games with the highest return should be sought out. The higher the return, the more the player will keep over time. I would recommend only playing video poker games that have a return of about 99 percent or more. Giving the casino one dollar of every 100 you run through the game is more than enough.

Variance is the intensity of the fluctuations in the bankroll. Games with a low variance such as basic jacks or better or deuces wild allow the player to have fairly gentle drawdowns of the bankroll. On the flip side, there are very few high paying (jackpot sized) hands in these games. The royal flush is the only one in most cases.

As more of the money returned from a game is concentrated in a few high paying hands (such as Double Double Bonus, or Triple Bonus Poker) the higher the variance and the larger the swings in bankroll. The pay in these games for the more frequent hands is reduced in order to pay for the few higher paying hands. The bankroll will be drawn down much more quickly in these games if a high paying hand is not hit. Conversely, hitting more high paying hands causes the bankroll to shoot upward more often. In a way, variance can be thought of as a bankroll roller coaster. The lower the variance, the milder the roller coaster ride. The higher the variance, the more intense the ride.

With multiple play games, the more lines that are in play, the higher the variance. The initial hand has a huge impact on the overall return for the rest of the hands.

Why am I talking about variance? Some people like a mild roller coaster ride. They like keeping the bankroll generally the same, slowly losing money until a royal flush is hit. Others get bored with this style of play. They would rather get more frequent high paying hands that the higher variance games offer, even though it means the bankroll will also be depleted much more quickly in between hitting those high paying hands.

Both low and high variance games can be found with returns over 99 percent. Either type of game will give the player a good return. The player’s personality will determine which game they prefer to play. Just be aware that the higher the variance, the higher the bankroll requirements. More money is required to ride through the steeper drawdowns between high paying hands.

So far here are the tips presented in this article:

Always play with the casino’s slot player’s club card inserted. It has absolutely no impact on the results of your play, but it will give you benefits for using it. Points can be used for free play, meals, rooms and other freebies. Established players are invited to special free events. They can also be given free play offers as well as free rooms, food, drinks, and shows. Each of these adds to the return of video poker play. Do not throw it away by failing to insert your player’s club card.