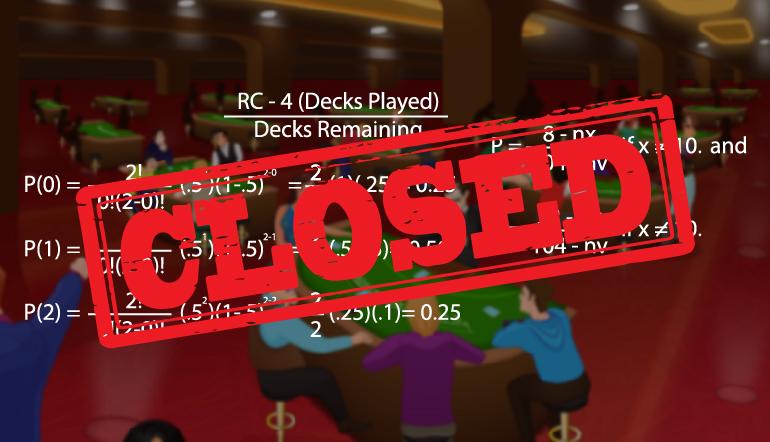 James Grosjean has never been one for mincing words or suffering fools. Still, several years ago, when I bragged to him about having strong card counting skills, I couldn’t help but be taken aback by his response. He told me that he thinks of casino advantage players - that is, sharp people who deploy strategies to beat the games - as evolutionary. “Card counters are salamanders crawling out of the water,” one of the most brilliant, most lauded advantage players in history told me. “Meanwhile, I am a fully evolved human.”

In other words, anyone who wastes time card counting resides at the bottom of blackjack’s evolutionary chain. Argue as I might for the craft that I had proudly learned to excel at, James Grosjean had a point. Card counting is undoubtedly a grind. It requires lots of hours at the gaming table and is easy for casino personnel to detect. While counting cards remain legal, it is frowned upon by the house and you will be booted from the table if it becomes clear that you’re employing it with proficiency.

Happy to be doing things that are more profitable and less obvious, he crowed, “You’re more heated up than I am!”

Worst of all, perhaps, the card counter’s advantage is no more than two percent. “A lot of bad things can happen when you have such a small edge,” Grosjean told me. “It’s why you hear counters talking about having losing years.” His point being that he does not play games where you can plug away for 365 days and wind up in the red. Underscoring it all, not long after our conversation, I heard a story about him paying off a professional gambler who had helped him out with a high-level play.

As he handed her the money, he cheekily said, “I hope this supports your gambling habit for a while.”

The habit Grosjean referred to, of course, was card counting. 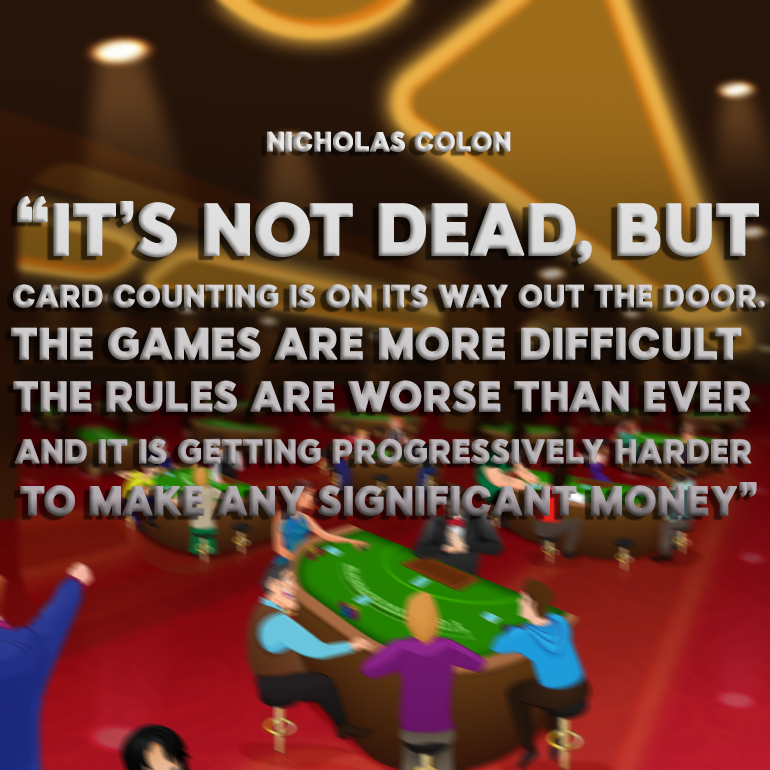 James Grosjean is not alone in thinking this way. Most professional gamblers who made their bones as card counters have moved on to bigger and better things. They bet sports, beat poker, devise strategies for extracting money from various machine games. According to an email exchange between the astute professional gambler Nicholas Colon (himself a former member of the seminal MIT blackjack team) and casino consultant Bill Zender, the number is low enough to make counting sound like a horse and buggy in the age of Henry Ford. “I believe there are only 100 to 125 professional level card counters in all of North America,” Zender wrote.

Clearly, the ranks have thinned. But does that mean card counting is dead? “It’s not dead,” says Colon. “But card counting is on its way out the door. The games are more difficult, the rules are worse than ever and it is getting progressively harder to make any significant money. During the MIT days, it was not uncommon to see someone betting $20,000 on a hand of blackjack. Now it is unheard of.”

Plus, Colon points out, the most advantageous moves will result in swift back-offs.  When warranted by the count, “Splitting 10s and doubling with 10 against the dealer’s 10 can be profitable,” he says. “But you don’t want to take the risk” of being caught and tossed from the table. 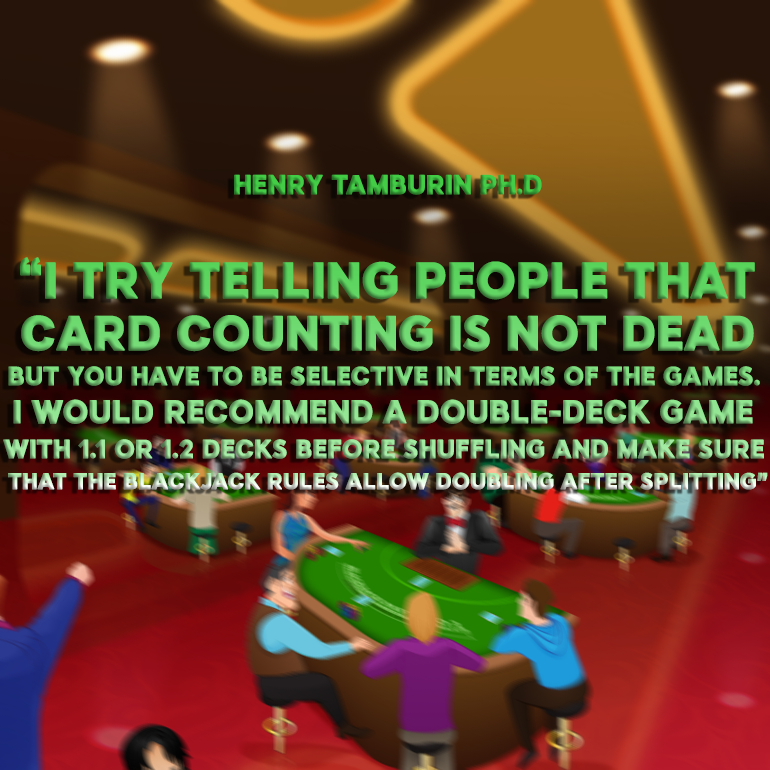 Colon’s advice for getting away with card counting? He suggests keeping betting limits low, limiting spreads (the escalation of bets made as the count goes up), learning and deploying obscure counting systems that casino employees might be unfamiliar with, and reserving play for the most opportunistic games. In other words, you should play free blackjack the way pensioners handle their retirement savings: Forsake profitability by being conservative and living to fight another day.

Henry Tamburin, an esteemed expert of the game and a former blackjack pro who’s moved on to greener pastures, believes there are opportunities if you really want to spend your time adding and subtracting ones (which is the way counters keep track of the decks’ status) while looking out for heat. “I try telling people that card counting is not dead but you have to be selective in terms of the games,” Tamburin says. “I would recommend a double-deck game with 1.1 or 1.2 decks before shuffling and make sure that the blackjack rules allow doubling after splitting. Without that rule, I wouldn’t bother if there is not tremendous penetration."

Rocking it old school, Tamburin suggests limiting time at the table to 90 or so minutes, acting like a gambler (high fives all around when the dealer busts; eyes rolled toward the heavens when you do) and breaking out the occasional strategy card. He advises intentionally making rookie blackjack mistakes, keeping one’s bet-spread reasonable and playing with the kind of camouflage that deflects attention even if it crimps profits.

While Tamburin is quick to say that counting is not as easy as it used to be, he does report a bit of a silver lining. At this year’s Blackjack Ball – an annual gathering, held in secret, which attracts the gambling world’s most notorious advantage players – he encountered young guys who “find the good games and make a good living at card counting.” 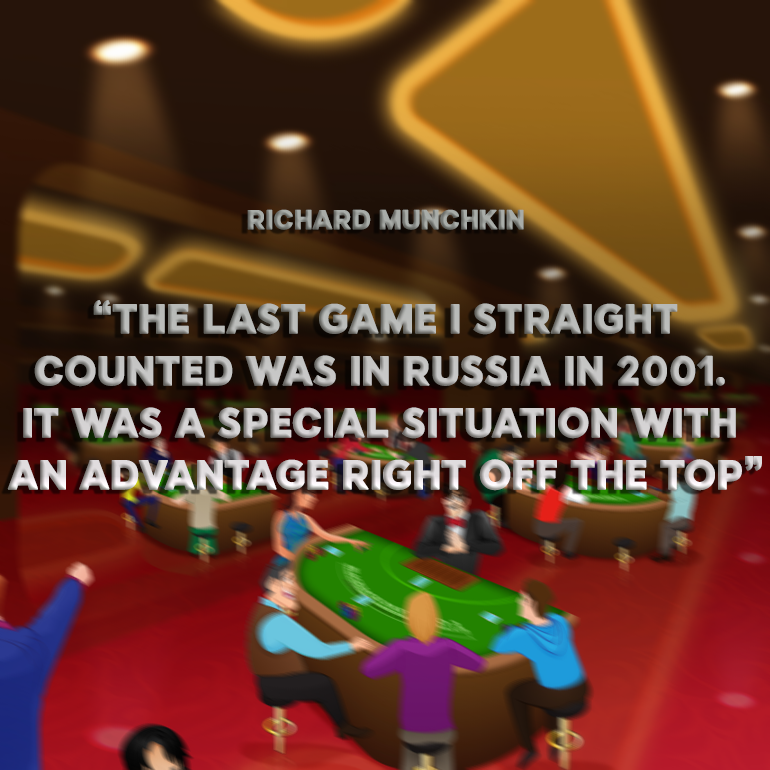 The really uplifting news, in fact, is that by going against the slow and steady grain, blackjack profits can be mind-blowingly significant. Just ask Richard Munchkin, a seasoned advantage player, co-host of the podcast “Gambling with an Edge” and author of “Gambling Wizards.” For years, Munchkin had been in Grosjean’s camp, writing off card-counting as a strategy with the relevance of an abacus. No longer. “We’ve been having guests on the show who have adopted the attitude of going into casinos, spreading enormously, hiding nothing and playing until they get thrown out,” says Munchkin, sounding pleased. “Some places they last 30 minutes, other places they last three days. Then they move down the road and hit the next place.”

Munchkin likes the take-no-prisoners approach, though he warns that it is not for those averse to travel or gamblers who enjoy eating comped meals at Las Vegas restaurants. “Things are bad for counters in Vegas,” he says. “Over 50 percent of the games pay 6-to-5 [on blackjacks, meaning that a $50 bet yields $60 instead of the $75 paid by 3-to-2 games, which used to be the standard]. Plus, the Vegas casinos are very quick to catch card counters and communicate the information to other casinos.”

Hence, he adds, operating as a serious card counter now means “living out of a suitcase and frequently being on the road.” Advantage players doing really well with the strategy, he adds, “go away for two weeks and have a general itinerary. Several have traveled in RVs.” One key in all of this is to not quit playing until you are asked to. “I heard about one guy who played for weeks and won a million dollars before they threw him out.”

For all of that, though, Munchkin acknowledges that he is out of the counting game and has no plan to get back in any time soon: “The last game I straight counted was in Russia in 2001. It was a special situation with an advantage right off the top. For me, right now, there are better ways to spend my time.” 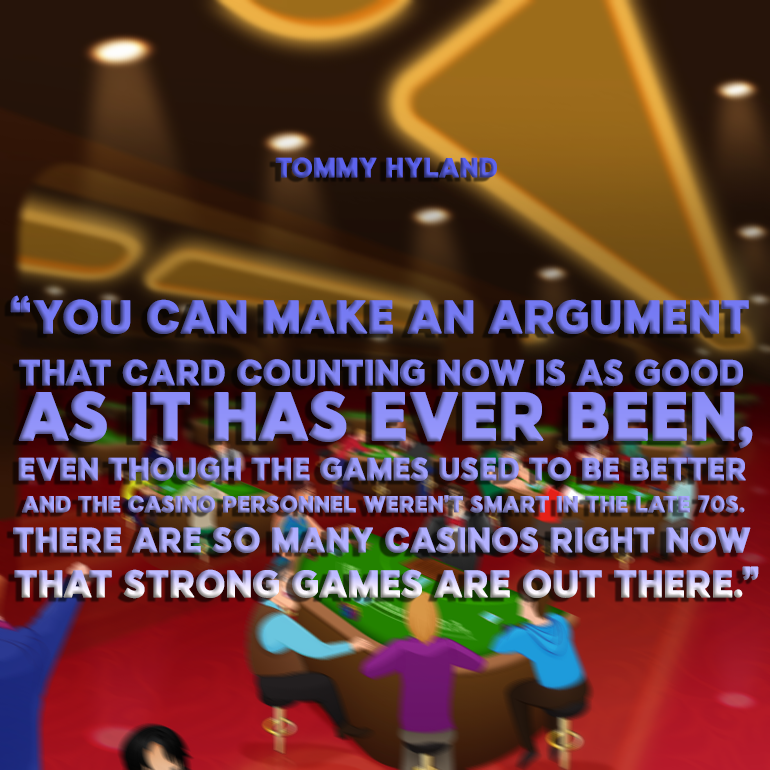 Then there is Tommy Hyland, another master of blackjack. Unlike Munchkin, he still plugs away at card counting. His assessment of current conditions is very positive. “You can make an argument that card counting now is as good as it has ever been,” he says. “Even though the games used to be better and the casino personnel weren’t smart in the late 70s” – which led to good opportunities back then – “there are so many casinos right now that strong games are out there.”

Hyland’s idea of a good game? “Dealers standing on soft 17, good penetration, the number of decks [less is better] and surrender. Surrender is an underrated thing. It may not be worth much off the top [at the beginning of a shoe] but it is good when the count gets high. It is good for fluctuation.”

Making things even better, according to Hyland, is the reality that the proliferation of casino gambling in America does not result in increased intelligence among those who run the joints. In fact, he maintains, quite the opposite is true. “I don’t think casino people, in general, are very smart,” says Hyland. “Now, with so many casinos, the smart ones are spread thin. They can’t watch everybody all the time and you can get in some hours before they get you.”

Considering that, he agrees with the approach of hitting blackjack tables with guns blazing and not letting up until you’re forced to. “I’ve played aggressively my whole life,” says Hyland. “I never played with much camouflage or cover. I always thought it was important to play for the money. If you play a tame game and have a very little edge, you take a chance with your casino bankroll.”

As for those who preach the gospel of playing for longevity, Hyland shrugs it off. With casinos spread across 30 states, being ejected from a blackjack table is not something he stresses about. “You can always find somewhere else to play,” he says. “Then, by the time you get thrown out of all the casinos, you go back to the first one and start all over again.”

Card Counting
About the Author
By
Michael Kaplan