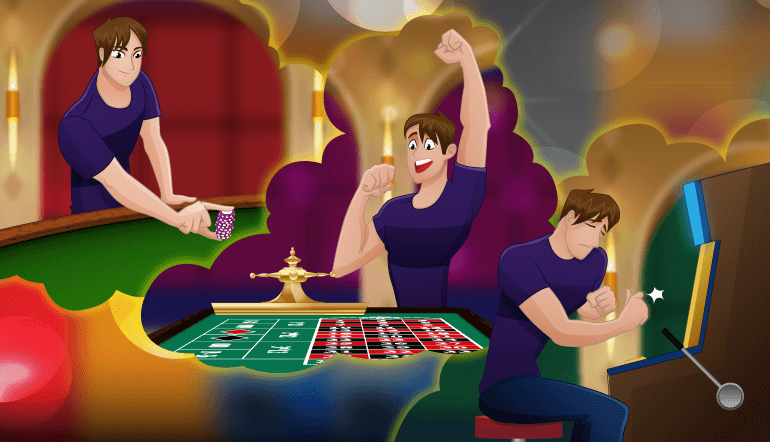 Casino gambling is not some arcane system of knowledge reserved for understanding by only an elite few. If you are not Albert Einstein, Stephen Hawking, or Neil deGrass Tyson then you are out in the cold if that were so.

The 7 smart gambling tips are:

No, indeed, every casino gambler probably has the intellectual skills to understand how the games are played, what the probabilities are, how the casino makes its money from the games and which systems cost the players the least amount in losses over time at their favorite games.

What else do they have to know? The speed of the games is important information. A two percent edge at a game that comes in with about 40 decisions per hour is far better than a one percent game that comes in with 150 decisions based on the same dollar amounts of bets. The house edge is not the only criteria by which to judge a game’s ability to grind away at your money.

How about how crowded your preferred game’s table might be? Crowded tables make the casino more money but cost an individual player less money if such a player wagers wisely. That is certainly a consideration.

My findings in a personal non-scientific observation over three decades of playing casino games is short and not sweet; players by and large do not understand the games they are playing. Many do, but many more do not. This is particularly true of slot players. In addition, many players believe in superstitious that are obviously nonsense.

So, what should we do? The following seven gambling tips are certainly a starting point for casino players. They will set you on the right track.

TIP #1: KNOW HOW THE GAME IS PLAYED

This might sound ridiculous because how can a player play a game of which he knows very little?

I see it all the time.

How many roulette players don’t realize (and maybe never realize) how the dealer takes the losing bets; how the dealer pays the winning bets; and when a new round of betting occurs and when no more bets can be made? Plenty. Just listen to a roulette dealer scolding players who have no idea of how the game is played. That will answer the above questions.

Ask roulette players what “even-money” bets mean. Many don’t know why they are called “even-money.” They think the payout reflects a bet with no house edge!

I have been at craps tables where “veteran” craps players argue that their winning bets haven’t been paid. Some will argue vociferously about this state of affairs and then the dealer will say (usually annoyed), “I haven’t gotten to you yet.” Such players have been playing for decades but still have no idea of the order of payouts.

Some craps players have no idea what the actual payouts of their bets are. They just throw such bets out and I guess they wish and hope they win whatever they are supposed to win when they do win. Some players consistently don’t even know what bets they have on the board!

Blackjack players do not know that the game generally breaks down to approximately 48 wins for the casino, 44 wins for the players and eight ties. Trend betting on live blackjack is not a good idea (actually it is never a “good” idea.) because the trend is always against the player except in exceptional hands such as blackjacks, double-downs, splits and double-downs on splits.

The lack of knowledge can’t make a game more fun – or can it? I have no idea.

“I prefer to play alone at the table,” says Joe. Nope! Joe is committing a cardinal sin of table-game play.

Slow is the way to go at all casino games. This holds true for every game and every player’s desire to play. Except for advantage players who usually want more and more decisions, the regular player wants fewer and fewer decisions. By the way, almost all casino players are regular players and they are putting themselves in jeopardy.

Yet, the average table-game player often wants to play alone or with only a few other players at his or her table. That’s a big mistake. Why position yourself to lose more money? That makes no sense to me. Lose less and enjoy your play more would be a good motto for casino players.

This advice holds true for slot machine players as well. Play one machine, slowly. Make that machine one that is a stand-alone machine. Do not play two machines as you basically double your chances to lose.

TIP #3: KNOW THE SYSTEM YOU ARE PLAYING

I enjoy playing gambling systems for the most part. I enjoy reading about them and listening to players who play them. But not all gambling systems are good; indeed, none can give the player the edge over the house and anyone who thinks they can is selling him or herself a bill of goods.

Is there a handy rule of thumb to distinguish the good systems over the bad systems?

Bad systems usually call for an increase in the size of one’s bet as losses have occurred. Or they call for such increases as winning has occurred.

Players like the idea of raising their bets when they are winning because they think such winning must continue. Not so. A winning streak only happens in the past. It has nothing to do with the now or when. The future is unknown; the past is not. But the past has no influence on the future. Too many casino players don’t realize this.

Raising one’s bet is a bad idea. It just gives the casino more of your money to have its edge attack.

TIP #4: WHAT THE SIZE OF YOUR BETS SHOULD BE

If I were to bet a couple of pennies on a bet in the casino, a win or loss would be meaningless as a penny or two is not a heart-thumping wager. If, however, I were to sell my house, sell my car, empty my bank account and any other investments I had and wagered all of that on one bet in the casino I would probably…die. I don’t think my heart could take this.

Our bets, according to my mentor the late Captain of craps, should be enough to cause the blood to flow, the excitement to increase though not so much that the dread of a loss causes us to become somewhat faint, no wager should be enough to endanger our bankroll or our physical health.

Waking up in the morning asking ourselves the question, “I bet how much yesterday?” is not a good situation.

[Please note: I’ve written about the Captain in my books. He was indeed my mentor.]

Casino gambling is meant to be a fun activity which it can’t be if there is any desperation during it. Betting too much is not good. Likewise betting too little does not give us the thrill we look for in the casinos.

I guess the Greek philosopher Hesiod had it right when he wrote (I paraphrase.), “Moderation in all things.”

That saying holds particularly true for casino players and their betting choices.

The worst and most depressing way to start a casino session/trip is to get hammered so hard so fast that you find yourself at the bottom of a deep hole and your concept of the next day or two is to dig your way out. You aren’t even worried so much about winning as you are about not being buried.

Obviously, you feel that you must play some more to dig away and fill in that hole. Of course, the casino will not lose its house-edge over you so you might continue a precipitous slide into oblivion and crawl your way home. In a sense you could be clawing your way to the bottom.

Can you do anything about that? Yes, you can slow down the pace of your play. Figure you are going to take a loss and tell yourself sternly, “Self, don’t do anything stupid.” Don’t bet more than you normally bet; don’t go for the gusto with really high house-edge bets that have big payouts.

Play safe. Play sane. Be wise. Stay contained. There are plenty of casino playing days ahead.

Now, let us say that you are holding your own, maybe down a little, maybe up a little, when to depart is the question.

Here are the possible answers:

Money management can’t give a player an edge over casino games. That is a solid fact that casino players must understand. They are in a negative situation and that situation will inevitably reveal itself, either now or over time. Often now and over time. I sometimes wonder how many casino players were ever ahead of the games they love to play at any time in their playing careers – be short-term or long-term?

So here are my recommendations for a good money management system:

Too many players worry about what level of comps they get from the casinos. Some casino patrons actually think of comps are freebees given by the casino because these players are liked – for some reason or other. They are of the mind that their host (if they merit a host) picked them for some ineffable reason.

Comps are based on one simple factor: How much money the casino expects you to lose over a period of time. They will return a percentage of that in terms of rooms and board and other “favors.”

Here is the simplest, smartest advice when it comes to comps: Take what they give you because you have earned that by potential losses but never play to get a comp. They will come or they won’t come.